Heal.X Innovation Has Big Plans for Their 3D Printed Casts

Have you ever had an injury that required a hard cast? Do you remember going to the doctor and having him wrap you up in cloth and fiberglass?  Remember how gross (yet awesome) it was to get the cast taken off?  Now, a Toronto startup is using 3D printing to rethink casts for fractured bones, sprains, and other injuries that require medical immobilization. 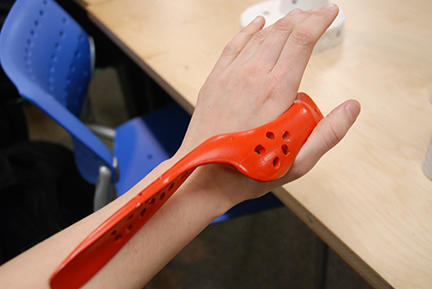 Mandad Tabrizi had a bulky fiberglass cast once, and it interfered with his life enough that he founded Heal.X Innovation.   As you may have already guessed, the company designs less expensive 3D printed casts that are more conducive to healing than their traditional counterparts.

Tabrizi said of the company’s ideology, “The core idea behind the system was to think about patients as people with behavioral needs throughout the course of their treatment.  Although some of the materials used in casts have changed over time, the technology itself has remained the same for 300 years, along with such unfortunate side effects as odor, muscular atrophy, nerve damage, and a very intimidating cast removal method.”

Tabrizi’s company takes a 3D model of a patient’s injured limb from an X-ray, and a Heal.X cast is 3D printed at a hospital from medical grade resin.  The resin cast, which has antibacterial properties, is then glued to the body with an adhesive.  One interesting highlight of this new process is that the cast itself can be switched out and easily redesigned to accommodate the healing process. 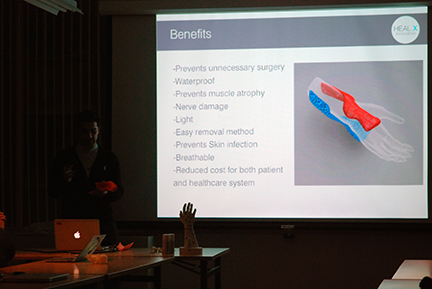 Tabrizi said, “A patient will receive check-ups, and in that check-up would be 3D-scanned and fitted for a new 3D-printed cast.  This also enhances the psychological sense of healing, as over time the cast becomes smaller and smaller.”

The advantages are there, but the jury is out on whether or not this process will take hold in the medical industry.  Tabrizi is convinced, saying, “The casts are designed to allow the broken limb to swell naturally, without compression, as part of the healing process, a freedom traditional casts don’t offer.  It’s a particularly useful technology for children, whose bones continue to grow while fractured.”

Tabrizi is optimistic and sees markets for his custom designs.  About his strategy, he said, “Since the hospitals take longer to adopt new infrastructure for these types of treatments, currently we are commercializing our wrist bracing system through two different paths.  First, we’re marketing through sport clinics to be used on professional athletes. Second, we’ll have a simpler version of our first brace available for less complicated injuries, such as sprains and carpal tunnel syndrome.” Tabrizi is in the process of patenting the Heal.X system, so it’s way too early to tell what the outcome of this startup will be, and he needs to quantify the performance of these casts, so the road ahead is long.