Hands on with the Makerbot Replicator 2

Jason Lopes is the lead systems engineer with Legacy Effects, a special effects company working on some of the biggest Hollywood blockbusters of all time. Unsurprisingly, therefore, Legacy Effects (formerly Stan Winston Studio) is based out of San Fernando, California. Some of Jason’s credits include Terminator Salvation, 2012, Avatar, Thor, Iron Man 1 & 2 and Cowboys & Aliens; amongst other successful TV and film productions. 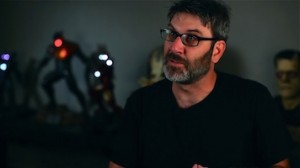 Jason is a strong advocate of 3D printing — it has proved to be an invaluable tool in his 3D tool kit, along with 3D scanning, 3D design and 3D modelling. He has been operating Stratasys’ (Objet) 3D printing technology for a number of years to produce stunning visual effects. However, more recently, with the advent of professional mid-range 3D printers Jason was keen to get his hands on this type of system to see how it might support the earlier stages in the workflow at Legacy; and for the last month or so he has been working with the Makerbot Replicator 2. Here he shares what he has discovered to date:

At Legacy we need reliable tools to do what we do, and with 3D printing I started big to achieve the results we needed from the technology. For a few years now I have been running Objet technology in-house, specifically an Eden 260v and a multi-material Connex500. These machines give the reliability we need as well as consistency and high quality models. In addition, I do also outsource daily large runs of SLA and FDM parts.

3D printing is just a part of what we do, but it is an increasingly critical tool and the volume of 3D printed parts that we produce is growing — almost daily. Because of this, I always have my eye on the 3D printing market and community to see if there are any new developments that will support our work at Legacy.

I have considered building kit 3D printers for early concept and development work at Legacy, which would free up the bigger machines for downstream work — I love to build and tinker, so personally it would be a blast for me. But, the pipeline at Legacy Effects is very demanding and that sort of time and commitment is just not available. Our crazy schedule demands a turn-key solution, out of the box that just allows us to dial the system in and start being productive. 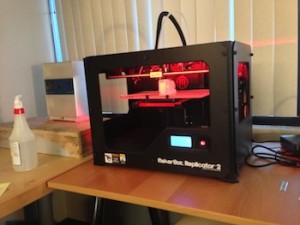 When I saw Makerbot’s Replicator 2, launched September last year, it excited me, this was being billed as an out of the box solution. It came just before Christmas and I’ve been having some fun with it! I have to say, it wasn’t an immediate dial in, but I wasn’t really expecting it to be. After about a week of tinkering, I did get the machine dialled in and producing consistent beautiful builds — and, for the record, LCD is now off and Sound EFX are off too to save what is left of my sanity 🙂

So I wanted to find out if the Replicator 2 would work effectively within the pipeline/workflow at Legacy Effects. We are producing 3D printed prototypes 24/7 and any piece of equipment needs to be dialled in and producing our data, which is mostly highly detailed and organic hard surface models. To find out if this could be an efficient piece of kit for us I needed to recreate existing prototype/model builds on the Replicator 2.  Another reason for getting this machine in-house was to introduce the 3D printing process to other departments at Legacy, such as Electronics and Mechanical, while avoiding down time on the Objet machines, which we can no longer afford to use for training purposes as they are always too busy within the productive workflow.

Working with the Replicator needed a different approach to how I have learned to work with the Objet machines, and I knew I had to build confidence, as with any new kit. I started building parts at .27 mm layer thickness and worked my way down to the finer resolution, which is what we needed. For anyone starting with a Replicator 2 (or any 3D printer come to that) I would advise you to not start by trying to hit .1 right out the gate. Learn and build confidence in your machine.  There is a reason why I am comfortable sending a file to one of my Objet machines that will take 63 hours to build, and confident leaving it over night — it’s because I am very familiar with my machine and I trust it… simple as!

The urge to unbox your printer, hop on THINGIVERSE and find the coolest big file to print is a natural one, but it will most likely lead to you being let down a few hours into the build. Utilize the files that come pre-loaded on the MakerBot SD card to dial in your printer and get familiar with the nuances of the system — it might not be what you want, but it will save on pain and disappointment. Once you start getting successful builds, though, your confidence level will go up and then work your own way. It’s worth the time investment. I found that printing at .1 is a lot easier when your build tray is levelled. So it is now common for us to dial in our build plate between prints.

From my research prior to getting the Rep2, people seemed to have problems with PLA sticking to the build plate. Yes, painters tape will help with that, but for me this means another thing to do in my workflow rather than slamming parts through, which I want to avoid.  So what works for me in between each build is a quick wipe down of the build plate with Acetone. I also picked up a 2nd build plate from the store to allow the machine to just go from build to build quickly.  Like I said earlier…  we are a very high volume studio and there is always a queue of files waiting to be built.

The software is the weak link for me. Using production files [very high res] is the bottleneck when processing files to build.  I challenge anyone to provide quicker results with the ZTools I am given and have to prep for RP. I had to leave MakerWare (even after the recent upgrade) and use ReplicatorG build 0040 to produce results finer then .27 with complex geometry. (Incidently, I know MakerWare is still in Beta so this is no final conclusion rather just a work around to get my desired results in my required time frame). And the update to V7 of the Firmware is a major improvement with smoother and quieter steppers, although I did have to revert once again to ReplicatorG for hi res.

In terms of the filaments, I’ve had mixed results with the “translucent material”, the best results so far have been with white and red.

At this point I am at 400 build hours — the Rep2 is pretty much running 24/7 now — and my office and my home is filled with parts off of it. I can honestly say that MakerBot Support has been fantastic and they know their stuff — with responses to queries that were quick, concise and spot on.

In terms of my wishlist with this 3D printer, I would love to be able to have the Replicator 2 networkable out of the box. What would also be really useful is an email notification when a job is complete. And for future updates on MakerWare, it’d be great if it displayed the time remaining during a build, as well as the current “% complete.”

That’s not to say that overall I am not very impressed with this professional 3D printer. I certainly am. It’s a no brainer for people who love to make and create things … within a week it will be an extension of the creator making his/her designs a physical reality. I predict that I will be installing quite of few of these for the designers that I work with daily in the not too distant future.  What the Replicator 2 produces — for the cost — is very encouraging. When I show parts off the Rep 2 to people who are used to my PolyJet and SLA parts their eyes open and they are intrigued.

I met Bre Pettis, Makerbot’s CEO, for the first time at the 3DPrintShow in London late last year. He is a very passionate person and very open — it is not hard to see how this transfers to Makerbot.  It’s a breath of fresh air to know that the passion and openness is what Makerbot is about and I look forward to seeing their growth and expansion.  Bottom line… if you can hold off on buying the newest computer out there… go buy a Makerbot Replicator 2 and start wowing the world.

Jason Lopes is the lead systems engineer with Legacy Effects, a special effects company working on some of the biggest Hollywood blockbusters of all time. Unsurprisingly, therefore, Legacy Effects (formerly Stan Winston Studio) is based out of San Fernando, California. Some of Jason’s credits include Terminator Salvation, 2012, Avatar, Thor, Iron Man 1 & 2 and Cowboys & Aliens; amongst other successful TV and film productions. Jason is a strong advocate of 3D printing — it has proved to be an invaluable tool in his 3D tool kit, along with 3D scanning, 3D design and 3D modelling. He has been operating Stratasys’ (Objet) 3D printing technology for a number of years to produce stunning visual effects. However, more recently, with the advent of professional mid-range 3D printers Jason was keen to get his hands on this type of system to see how it might support the earlier stages in the workflow at Legacy; and for the last month or so he has been working with the Makerbot Replicator 2.