As 3DPI editor Rachel Park, a long-time commentator on the 3D printing industry, tells me, Gillette was one of the earliest consumer company’s to use 3D printing technology. Since the 90’s, the company has used additive manufacturing to prototype its shaving products.  Unfortunately, 3D printing was incapable of prototyping functional razor cartridges, which would become deformed when exposed to hot water. For that reason, Gillette’s 3D printed prototype razor models could only be used for aesthetic development. A new patent filed> by the company, however, indicates that Gillette has found a solution to this problem.

According to the patent filing, Gillette will likely use digital light processing (DLP) to prototype the cartridges: “In a preferred embodiment, the housing is fabricated using an additive manufacturing that uses liquid ultra-violet curable photopolymer resin (UV-curable resin) and an ultra-violet laser to build parts a layer at a time. Ultra-violet light is applied to layers of UV-curable resin at a time to form a solid structure.” To increase the temperature resistance of its cartridges, the company may incorporate a “filler” material, such as aluminium oxide, crystalline silica, or a ceramic material: 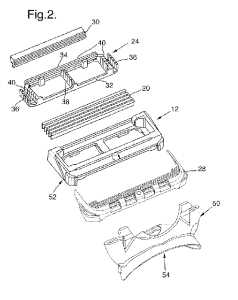 The patent goes on to hint at the use of direct metal laser sintering for the creation of the razor’s metal inserts: 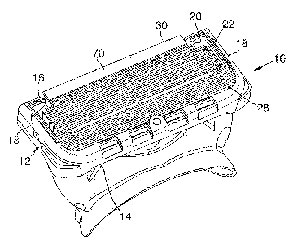 Other parts of the Razor, including the handle, are then described as being produced via selective laser sintering:

Before you go out telling everyone that Gillette plans to mass manufacture its razors with 3D printing, however, it’s unclear from the patent that this is their intent. If anything, it sounds as though 3D printing is being used, in this context, to help the company prototype their products more effectively: “rapid prototyping provides a quicker, more efficient means to experiment with different forms of a product before committing to the cost of making molds for mass production. In a field such as razor cartridges where small changes can make a significant difference to performance of a razor cartridge, having this flexibility in a functional razor cartridge is very valuable.”

There are phrases throughout the patent that do reveal a plan to use the razors for “repeated shaving”, which may be what has caused some other blogs to believe that mass additive manufacturing of razors is in the works. I’m afraid to make that conclusion, though. If you want to decipher the patent for yourself, let us know what you think.  While doing so, look out for such pedantic descriptions of shaving science as pasted below: