The next generation of phones could be flexible and they could serve up holographic images without the need for glasses. We even have a working prototype that will star at ACM CHI 2016 conference in California, which comes loaded with features that could change 3D printing.

HoloFlex was produced by Queen’s University Human Media Lab in Australia and the flexible material comes with a vast array of miniscule lenses on the screen. Technically it means that the Star Wars fantasy of Princess Leia appearing for a conversation is on its way.

It kind of makes the iPhone vs Samsung war look a touch redundant.

The HoloFlex features a Flexible Organic Light Emitting Diode (FOLED) touchscreen with full 1920×1080 HD resolution. It means you can view 3D images from any angle with full motion parallax and stereoscopy. This technology goes well beyond phones, then. It could potentially be the 3D TV of the future.

“HoloFlex offers a completely new way of interacting with your smartphone,” said Professor Roel Vertegaal, director of the Human Media Lab. “It allows for glasses-free interactions with 3D video and images in a way that does not encumber the user.” 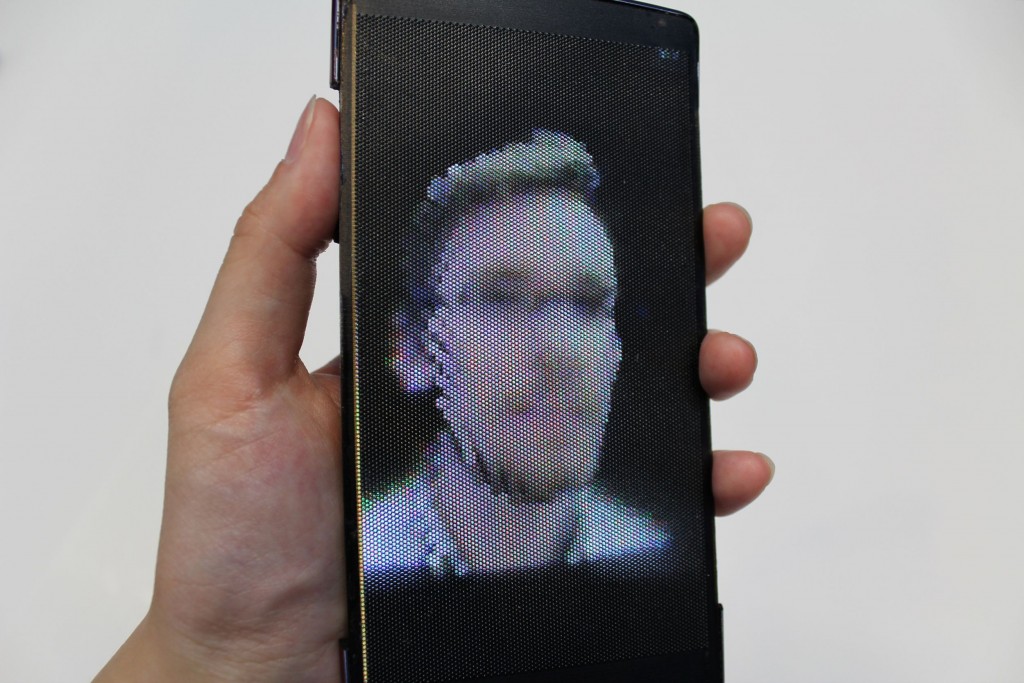 Each image is 12 pixel-wide blocks and the screen is coated with 16, 000 miniscule fisheye lenses that refract light to create the 3D image. It uses a depth camera and that means holographic video conferencing is a very real possibility. The users can actually pop out of the screen, which is a novelty that should not wear thin too soon.

Lens breakthroughs are on the way

Of course the quality of the lenses will have to improve, but recent advances in 3D printing and scientists’ recent efforts to harness terahertz radiation could drive the technology forward in a hurry. That could make this flexible finished product even thinner.

It all runs on a 1.5 GHz Qualcomm Snapdragon 810 processor and 2GB of memory, with Android Lollipop as the operating system. That is impressive in itself. By the time this tech is freely available, that chip will be in a museum.

It still begs the question, which technology will really take hold. There is absolutely a space for holographic technology and Virtual Reality. One of them, though, will almost certainly steal a march when it comes to home communications. This is potentially VHS vs Betamax all over again.

Facebook now owns Oculus Rift and that feels like the coup de grace for Virtual Reality, especially as even the inventors claim this holographic technology won’t hit the open market until the end of the decade at the earliest. In fact, Vertegaal sounded slightly defeatist when he said that the most marketable feature here might be the ‘bend gestures’ that could change the 3D printing industry.

The MagicWand could allow us to play games without controllers, if haptic feedback gloves don’t get there first. It will certainly allow us to interact with visuals and use gestures and tools to affect a visual model, which could be a revelation for 3D printers and makers of any kind.

Hold your designs in your hands

Dr Vertegaal showed how how we could swipe the touchscreen to manipulate, rotate and even scale objects before sending them to the printer. Effectively you’ll have a physical representation in the actual printing size, or larger, which could help eliminate a lot of unnecessary mistakes and save us time and money.

It’s an intriguing prospect and there is so much investment holographic work at the moment that there simply has to be a future for this flexible screen. Microsoft’s HoloLens recently targeted architects and product designers, which should be enough to ensure the medium’s future on its own.

An arms race is going on right now, though, and we just don’t know what will emerge as the dominant force in communications.

Virtual Reality, holograms, they all have a place. We just know that 3D printing will be involved and the future is going to be awesome.