This wrench is a gamechanger

Made in Space has produced its first tool in space. It’s a simple wrench that could have been made for almost nothing back home. But it’s a big deal for the aerospace industry.

This seemingly inconsequential wrench has been years in the making, but Made in Space finally installed its Additive Manufacturing Facility on the International Space Station in April.

It’s the company’s second 3D printer in space and the first that can be considered commercial grade. The first printer breached Earth’s atmosphere in 2014 and the pilot scheme was such a success that it has followed up with a state of the art printer that should last the entire lifetime of the ISS.

Getting straight to work

It has wasted no time in getting to work and this little wrench is a landmark moment. It even has official sponsorship from tool brand Kobalt, thanks to a commercial deal between Made in Space and Lowe’s department store.

This is a commercial printer and it is being run as a business. Made in Space says there is a six-month wait and the machine is fully booked by companies creating items like medical prototypes, a satellite manufacturer that wants to test new geometries and, of course, essential tools for the ISS crew members.

We need to recalibrate our thinking when it comes to 3D printing in space. Transport costs to get 1kg of cargo to the ISS is generally considered to be approximately $20,000, although that will come down in the near future as commercial companies vie for business. So this wrench would cost a fortune to send from Earth and supplies are strictly controlled by simple necessity. There is no overnight delivery service when you’re working outside the Earth’s atmosphere. 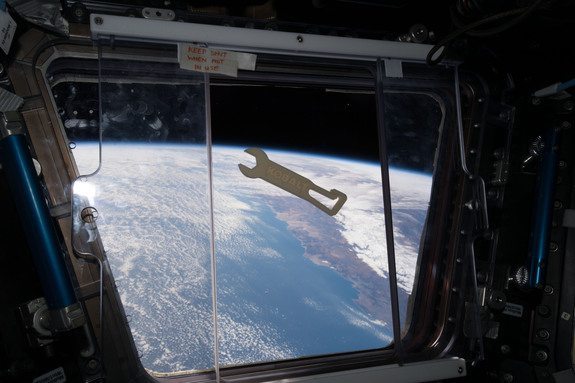 This wrench is a gamechanger

So the ability to create a wrench or other small tools on the ISS is a massive step forward for the astronauts and research scientists aboard the ISS. This one came with a neat additional feature, too, a fastening clip that means this hugely valuable piece of equipment won’t simply float away.

Of course Made in Space has loftier goals and intends to service the aerospace industry with a vast number of small parts, tools and essentials to keep the ISS running.

Simple tools could save missions

As a species we’re looking farther afield, too, and the ISS or the mooted lunar village could serve as a launchpad for expeditions to Mars and other as yet uncharted parts of the solar system. Simple tools, or the lack of them, could hold the whole expedition up and potentially cost millions of dollars as emergency supplies are sent from Earth.

NASA is fully behind the whole concept and it is easy to see why. Anything that gives those aboard the ISS the chance to print their own parts and tools, rather than wait for supplies, has to be a good thing.

3D printing also has the potential to help us with construction on other planets, improve our ability to maintain and develop space craft on the fly and to provide a better quality of life for the workers that endure great hardship aboard the ISS.

So this little wrench might be just a tiny step for man, but it really is a giant leap for mankind.