Finding Balance Between Aesthetics, Practicality and Performance — The Opus Amp for iPhone and iPad Enabled by 3D Printing

For me, sharing music is to expose the person within in its rawest and purest form, emancipated from all superficial qualities and underlying momentary tendencies – even if it’s for a second in space and time, while desperately searching your pockets for the ringing phone in a packed bus. It is sharing life and evoking unifying emotions to celebrate joyous and sometimes less cheerful moments in our lives, that as a concept has been around since the dawn of man. It’s also gotten a lot easier in the digitized era, as practically every portable media consumption device currently on the market has speaker(s) for this purpose. But this portability also results in a couple of compromises – either the quality of the sound is below-par regarding clarity, volume and other audio-related elements or one ends up carrying around dead weight, as the batteries of the respective device have run out due to extensive Spotify sessions.

After experiencing a summer spent almost entirely outside with the arguably best phone for listening to music with its internal speakers and also testing various external ones as its companion candidates, it’s become clear to me that these issues are still far from solved – assuming you’re not training for the world’s strongest (wo)man competition by dragging around a PA system and a generator all the time. But luckily, there is more than one way to enhance the sound waves –  even without accessories requiring electricity of their own – which also have aesthetically pleasing qualities. One attempt to combine these aforementioned elements is a work of art suitably called the Opus. The project – currently looking for funding on Kickstarter – is the brainchild of designer Sanjeet Das, who’s an intern product designer at Innovation Factory, the inclusive collaborative design community in Chicago’s West Loop. 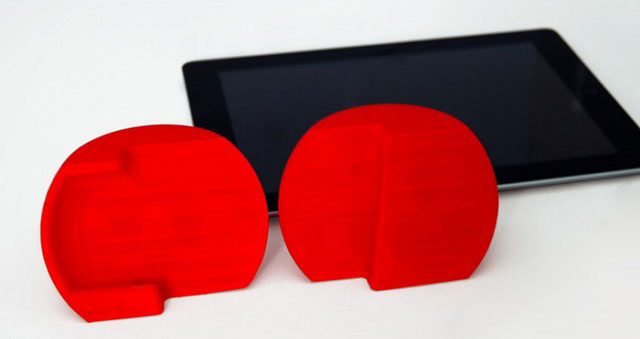 The core idea behind the Opus has been to create a stand, to hold the device at an ideal 60 degree position for listening to music or watching movies whilst also naturally enhancing the sound. This also tackles another issue with modern portables, whereby speaker placement is selected predominantly on visual and not functional reasoning. In this case, the sound enhancement is created by geometry, redirecting the device’s own sound output from the side or back facing internal speakers to the front by the spherical curved shape of the Opus – a simple and seemingly very functional solution as well. When the stand is not in use, the two parts can be attached together via the use of some magnetic magic in order to create a full sphere with two interlocking parts, where the opposite forces of the world balance each other out. However, a spherical form does not immediately associate to easy portability – at least without a carrying accessory to place it in – so does the Opus fit in a pocket? As phablets gain in popularity, the answer might very well be yes or if not, left to the clothing industry to decide regarding their future jeans styles. 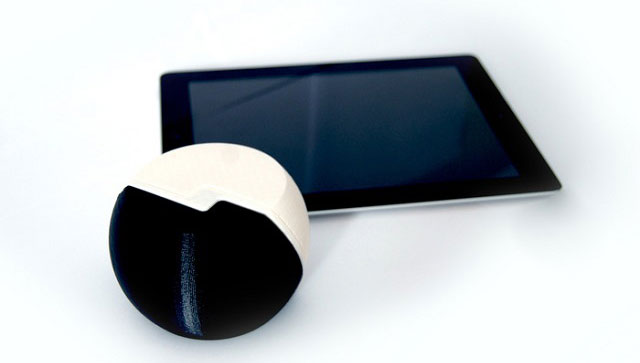 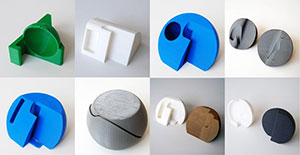 The first (pre-production) units and all iterations of the prototyping phase of the amp stand have been made entirely with 3D printers – a Replicator 2 and an UP! to be more exact –  but the production models will be mainly injection moulded, although, according to the campaign, a limited number of Opuses(?) will be manufactured with 3D printers if the funding reaches its goal.

The stands will be available in several different colours. However, combining a rumoured champagne/gold coloured iPhone 5S with a matching Opus can only be done by choosing a 3D printed version – and I’d like to believe this to have been the intention as well. If the less flashy and conservative colours suit you better, the black version is unlikely to ever go out of fashion.

Even though the iForce is strong with this one – the amp stand has initially been designed to be used with iPads from the 2nd gen up as well as iPhones from 4G and iPod touches from the 3rd gen – the Opus is also (accidentally?) compatible with Samsung’s Galaxy S3 and the more recent S4. Therefore, if Opus does succeed in reaching the market, there might be a need for two tailored marketing campaigns – but as such this stand combines both aesthetics and performance in an orderly fashion. But before the Opus team proceed to thinking about further strategical decisions, the first step is to gain the necessary funding – in this case $10,000 (with about a fifth of it gained at time of writing), so watch Sanjeet’s pledge: