Brought to You by NASA: More 3D Printing Robospiders In Space!

Just when you thought that NASA had had enough of arachnobots outfitted with 3D printers, they fund another 3D printing robospider project.  This time, it’s not for fusing moondust with lasers in order to build lunar habitats. Instead, it’s for building giant satellites and solar panels in-orbit.

Tethers Unlimited was founded by Dr. Robert P. Hoyt andDr. Robert L. Forward to be a one-stop shop for cool technology on land, in the air, at sea and out in space, including: “advanced propulsion, power, communications, and robotics technologies.” Basically, anything you’d need to build a space insect with additive manufacturing capabilities. So, after inventing the Hoytether, a space tether[1] that can survive damage from space junk and micrometeors, Dr. Hoyt decided that NASA could use a 3D printer in space. Unlike the comparatively small 3D printer developed by Made in Space, to be used aboard the International Space Station, Hoyt’s SpiderFab will print in the depths of space, constructing large scale structures among the stars. 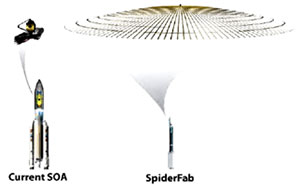 As we’ve covered in previous posts on the topic, carrying extra weight into space is a huge inconvenience and dramatically increases the amount and therefore the cost of fuel needed.  That’s why we can’t just launch a bunch of girders to the moon to construct habitats. Rather than building satellites on the ground and sending them into space with rockets, the Tethers Unlimited team proposed constructing a robotic system that could print and assemble them in space, allowing for much larger satellites than currently possible, as depicted in the diagram to the right. NASA liked the idea enough that it awarded Dr. Hoyt, et al. $100,000 in initial funding with a NASA Innovative Advanced Concepts grant.  And, with the success of Phase I of the project, they went ahead and threw Tethers Unlimited another $500,000 last week, to be used over the next two years.

Addressing the frustrations of many who’ve performed desktop 3D printing, the team hopes to combine fused filament fabrication with automated fiber layup, a method for quickly manufacturing large structures from composite materials, which they call the SpiderFabTM process:

A typical FFF machine requires an entire afternoon to print an object the size of a coffee mug. For these reasons, we are pursuing an approach that fuses the flexibility of FFF with           the performance and speed of another additive manufacturing         process: automated fiber layup. Essentially, we are working to develop a capability to rapidly ‘3D print’ composite structures using high performance fiber reinforced polymers. This method will enable a robotic space system to build up very large, sparse structures in a manner similar to that in which a spider spins a web, extruding and pultruding structural elements and assembling them in 3-dimensional space to create large apertures and other spacecraft components.

In addition to the SpiderFab robot itself, the team is developing what they call the Trusselator, which will use the SpiderFab technology to construct large solar arrays that could, someday, provide power for trips to Mars.

That isn’t to say that 3D printing in space doesn’t have its obstacles, but the Tethers Unlimited sees a silver lining on every cloud, as detailed in their report to NASA:

The foremost is the microgravity environment in space. Most terrestrial additive manufacturing processes rely upon gravity to facilitate positioning and bonding of each material layer to the previous layers, and in the microgravity environment we will not be able to rely upon this advantage. However, the lack of gravity also presents a very interesting opportunity in that it enables structures to be built up in any direction without concern for distortions due to gravity. In 3D printers on the ground, gravity causes unsupported elements to slump, so structures with overhanging elements or large voids must be supported by additional materials that are removed after printing. In space, these support materials will not be required, and a 3D printer could ‘print’ long, slender elements, drawing a sparse structure in 3D like a spider spins its web, or build up a solid structure in concentric spherical layers, like an onion.

In addition to dealing with gravity, or the lack of it, the team will also need to handle printing in the fluctuating temperatures of space and the materials they use will have to withstand the temperature extremes, UV light, radiation, and atomic oxygen that may be present. This is why they will have been working on a “Carbon Fiber reinforced Polyetheretherketone (PEEK) thermoplastic” that should stand up to the test.

What projects like this, MIT’s composite building block endeavour, and hybrid 3D printers tell us is that current 3D printing technology is not at the stage that we’d like it to be. From the need to break 3D printers free from their enclosures, they will be developed to take on new forms and functions, so much so that, by the time SpiderFab is launched in 2020, 3D printers may not resemble the machines that we’re currently familiar with and may not even be called 3D printers at all.

[1] Don’t ask me what a space tether is, I’m just looking into it myself!

0 0 0 0
More on this topicDirectly Printing Gold & Some Upcoming Events
More on this topicFinding Balance Between Aesthetics, Practicality and Performance — The Opus Amp for iPhone and iPad Enabled by 3D Printing