I’ve been chatting with Eric Schimelpfenig. As the founder of SketchThis.NET, a company that provides training, modelling, and consultation on SketchUp 3D design software to adults and students alike, he’s pretty in with the SketchUp team at Trimble, and they are all working collaboratively on something really rather adventurous for the upcoming World Maker Faire (WMF) in New York later this month. 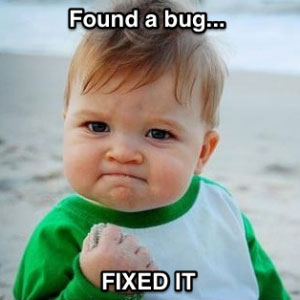 I thought I could get rather over-enthusiastic sometimes, but next to Eric, I’m like a half-deflated balloon! To give you an idea of the guy’s passion and approach, this picture on the right was posted on his last blog entry about an otherwise boring software bug fix [plus it’s just too cute and happy not to share]

Incidentally, if you have encountered the bug in SketchUp, and you need the ‘how-to’ — go here.

So Eric made contact because he wanted to let me know about the Trimble SketchUp booth at WMF, which will look a bit different this year. It’s a case of ‘don’t just take my word for it’ because they’re aiming to prove out the wiki house concept using Sketchup’s plugin, which allows users to design a Wikihouse, lay it out on plywood, and export the DXF’s for CNC. The team involved are also planning to have a pile of fun (and frustration?) doing it. 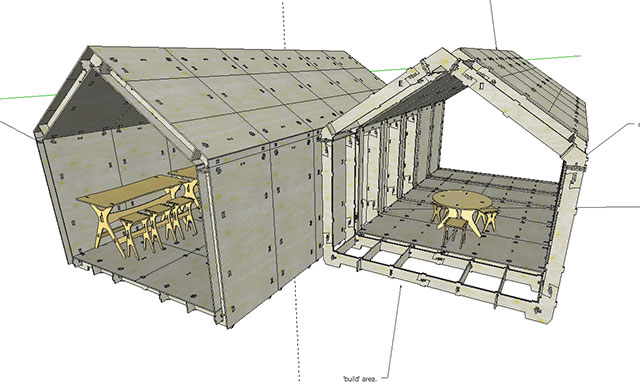 The 24ft x 24 ft booth, and the furniture that will be on it will all have been designed in SketchUp. Once complete, the files are being sent out to a local fabricator to Eric in North Carolina — ShopBot — who will cut the respective panels. Eric is then planning on driving all the parts, with obvious logistical connotations, up the East Coast to New York. He and the team, together with fellow collaborator Bertier Luyt of Le FabShop in France — who is another SketchUp expert and who will also be at WMF — will then put it all together on their allocated plot ahead of the start of the faire weekend. 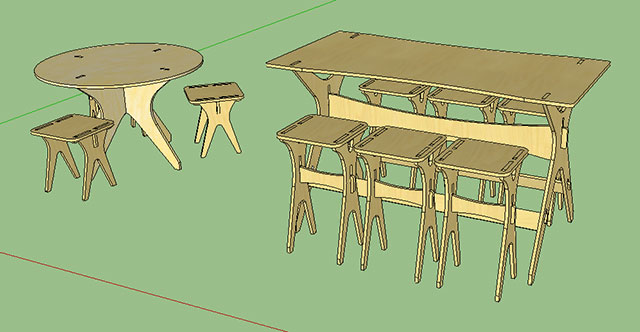 The plan is to have a videographer documenting the whole thing, and Eric has conceded that tears and tantrums are not out of the question during the process, but the aim is a complete construct and happy faces at the end, maybe a glass or two of something. And as he told me: “What a story we have to tell Maker Faire visitors — we designed and made the booth you’re standing in ourselves. This is what you can do with SketchUP design software, and with collaboration, making anything is possible.”

Eric is a big fan of the wiki house concept, for him it comes under his definition of 3D printing. I’m not convinced on that point personally, but what I have absolutely no doubts about is that Eric is a fantastic ambassador for the 3D industry, designing in particular and making it more accessible to everyone. His presence at Maker Faire — on the Sketched Up wiki booth  — will certainly draw visitors in.

And here on 3DPI, we’ll get the video footage of the construction process post-event. It’ll definitely be one to watch!

The fourth annual edition of the World Maker Faire event in NYC will take place 21-22 September at Flushing Meadows in Queens.

0 0 0 0
More on this topicFinding Balance Between Aesthetics, Practicality and Performance — The Opus Amp for iPhone and iPad Enabled by 3D Printing
More on this topicGet Your Moto On – Motorola Ups the Customization Stakes