When you see skateboarders practising tricks in the local skate park, you wouldn’t necessarily think their carefully tuned pieces of kit could one day be 3D printed.

However, much like many hobby and sports areas, Additive Manufacturing is making its mark, no matter how much or how little the community like it. It’s important to bear in mind that in order to keep a hobby or sport interesting, engaging and fun, its important to experiment with the kit currently available. This can aid improvement of current methods and materials, or just an extra fun element that hobbyists and sportspeople can take part in, or just watch from afar.

Skateboarders, like many people with a passion in a hobby or sport, take pride in their equipment and are known to customise their boards. This can be anything from a paint job and wheel colors and size, wheel material and the type of bearings used with the wheels, as well as many other features.

Today’s focus however, is on 3D printed wheels.

Skateboard wheels are usually made from polyurethane, and come in different shapes, sizes and levels of hardness to suit different skating styles and people who use them. These wheels have to take a lot of weight and pressure as they have to cope with a person landing on them from quite a height, as well as transporting a person when the skateboarder is just cruising. Harder wheels are less likely to bounce, whilst softer wheels provide a bit of give and shock absorbency which is great for skateboarders who prefer this.

Braille Skateboarding is a youtube channel dedicated to the world of skateboarding, and the channels features tonnes of videos of the team making custom parts and taking part in crazy challenges with all sorts of silly creations. Some of their creations include using an electric guitar as a skateboard deck, using gummy bears as griptape and using pool balls as wheels.

As part of their ‘You Make it We Skate it’ series, Lance and his buddies were sent some 3D printed wheels to try. They were modelled and printed by John Peabody, a friend of Lance’s, which Peabody printed them at school.

After attaching the bearings and wheels to the deck, it was clear to see that the team were both excited and a little worried about what these ‘futuristic’ wheels had in store for them.

Sadly, the hype was somewhat short lived. “The clip was amazing, that sucks though”, remarked John Hill, the tester for the day. However, despite the brittle wheels ‘exploding’ pretty quickly, the guys were definitely having fun with them, making their amusement known with “that was rad”.

Hill was then asked if the 3D printed wheels felt any different. “I don’t know, I didn’t really notice a difference to be honest. Leading up to it, yeah definitely it was very scary, like you can feel a little resistance, but once you’re in it, yeah smooth sailing, I think.”

He then went on to try some more risky moves, starting off with a tailslide. “I might have to wax it just a little bit, or with these plastics I might not need to”, Hill highlighted an upside you wouldn’t have thought would be possible with these brittle wheels. After successfully managing the trick, he affirmed the useful feature with, “no wax needed”.

As each wheel broke, it was replaced with a white normal wheel. Slowly, well not so slowly, blue wheels turned to white, and then there none.

After a brief exchange of ‘dude’, the two skateboarders sat down to evaluate the wheels they had tested.

“You know, honestly they felt great, they rode really well, they grinded the same, like, cruising right before you pop a trick is fine, but they cannot take support as a normal wheel does. I think it’s because they’re hollow, but they just exploded”, Hill said.

Lance added, “if they were printed in one solid mass, it would probably work”.

Watching him attach the trucks to the deck was probably the most stressed I’ve been watching one of their videos. Tinker away by all means, but don’t be a Lance or you’ll lose your fingers.

I also agree with one of the children, who pointed out the elephant in the room, ‘I think they should make metal ones’, thankfully this is possible by 3D printing. It’s clear to see at this point that the main issues are down to strength, either due to the way the filament was printed, or the filament material itself.

The wheels and trucks that Peabody sent in for testing has helped him work out which parts to improve on, and they’re an impressive for a project that he did himself at school.

After their first adventures with 3D printing, viewers started telling the channel that they could do better, and began sending in their 3D printed wheels. The next set were sent in by RJ Warner, who printed a set of wheels in a far less brittle material.

After a rather animalistic package opening, four blue wheels emerged from a package, sparking flashbacks to the exploding ones from before. However what instantly set them aside from the first set was quickly pointed out by Aaron with “they feel soft!”.

After setting up a skateboard with these squishy wheels, it was clear from a few tricks with no weight on the board, that the wheels were providing a fair amount of bounce power. However, once where was weight on the board, the squish-factor was a little too much to allow for a smooth ride. Chris then voiced the phrase on every tech user’s mind, “one day those damn robots will get it right”.

Doug, who jumped straight first into using the wheels, very quickly noticed how much he would have to adapt his technique to make sure he wouldn’t fall off the skateboard.

As usual, a less than perfect outcome didn’t dampen their spirits, and Chris was quick to comment on the comedic sound that came with such soft wheels, with “cute” and “I like that sound”.

It was safe to say that these wheels were far more hard wearing, but didn’t do so well when it came to bearing weight and moving at the same time.

It must be a blue thing, because these black wheels were a success. There were a few issues to begin with when getting used to them, as raised by Aaron with “I guess you gotta lean back so the squish doesn’t send you forward”, but it was nothing a little practice couldn’t fix.

After several takes of Nelson dropping onto the board from high up, it was also clear that not only were these wheels hard wearing, they also had the right amount of softness to absorb a little bit of the shock, whilst being rigid enough to cruise and trick with.

It was also clear that fellow skateboarders would consider these wheels if they were available, so the earlier attempts certainly haven’t put people off of trying them. It’ll still be some time and a lot of developing before 3D printed skateboard wheels will be readily available, but at least the potential that 3D printing has in this sport is very clear, and very real.

When you initially see this cool looking contraption, you’d initially thing that this was just a reinvented bearing, then wonder how the heck someone would piece it together, but this is in fact a skateboard wheel, which has been printed entirely in one piece.

According to the company who made it, Imperial & Machine Tool Co, this could be the first one of its kind that’s been 3D printed. It’s size makes it clear that this isn’t just a bearing, and is more likely to be a 2 in 1 bearing and wheel at the same time. 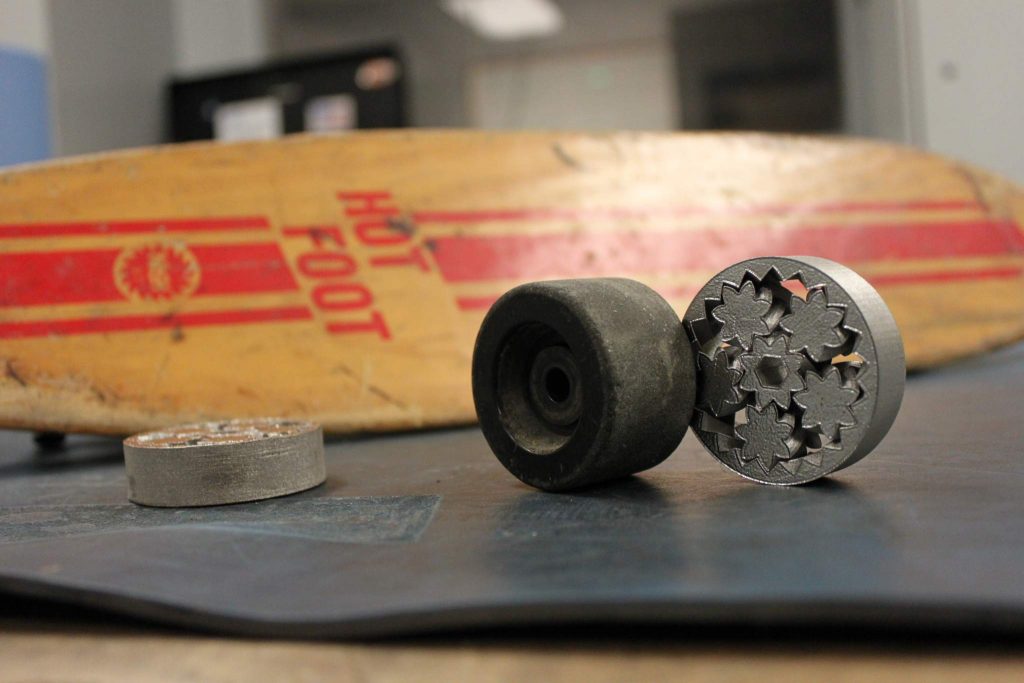 It relies on a complex jigsaw of pieces that have been printed all at once to allow the outer wheel edge to move whilst the middle is fixed onto the skateboard. A normal bearing does the same thing, but relies on ball bearings to move instead, and they are assembled rather than being created already assembled.

What does this mean for the future of skateboarding?

Aside from the worries of overly noisy, incredibly rigid skateboard wheels, skateboarding as a whole could one day be getting an upgrade. Much like the 3D printed skateboard wheels mentioned before, things are still deep in the development phase and will take a while to be tweaked to perfection, but the upsides to this new method of manufacture certainly looks attractive.

Having all the parts assembled eliminates the need for workers or machinery to assemble part. Also, relying on jigsaw puzzle parts inside the bearing/wheel also means that its less likely for things come apart, and there’s less parts to worry about cleaning up if something does go wrong. Not to mention the amount of waste metal that can be saved from either being thrown away or remelted constantly to create new parts.

All in all, 3D printing’s debut in the skateboarding world is being taken pretty well, with hiccups and breakages merely a filmed funny moment to show the masses, whilst outcomes are evaluated and later prototypes are improved and worked on. Someday Additive Manufacture could open doors to yet another load of customisation features and tweaking, so certainly watch this space!