When it comes to the first day of Euromold, manic doesn’t quite cover it. For any member of the 3D printing press, and we’re a growing breed, Euromold — held annually in Frankfurt, Germany at the end of the calendar year for anyone wondering — is a must attend event. That’s because it is a not to be missed, vast exhibition for all of the big 3D printer vendors that serve the industrial sector — for prototyping, tooling, casting and more prominently this year, manufacturing and production. I didn’t even pack any heels this year, I HAVE learned my lesson(s)!

What a brilliant, exhausting, inspiring, exhilarating, absorbing and informative day — and no sore feet. Hard to even know where to begin — I think it is appropriate to start with the most beautiful, before we get in to the nitty gritty of the tech updates, strategic visions, interviews and press conferences. And the beauty of the Stratasys ‘Sixth Element’ Exhibit, which greeted all visitors to Hall 11 of the Messe Frankfurt, was breathtaking. Stratasys had put out a press statement ahead of the show about the exhibit, featuring the work of Nick Ervinck, but it is actually a composition of three creative minds — the other two being Eyal Gever and Neri Oxman. The focus is on the natural elements (Earth, Water, Air, Fire and Life) with the 6th element in this case being 3D printing — of course.

The works speak for themselves, in that I hope my crude photography gives you a sense of what I mean, but I would urge you to see them for yourself if you get the chance — numerous museums around the world are looking to commission this series over the next year or more I have been reliably informed. 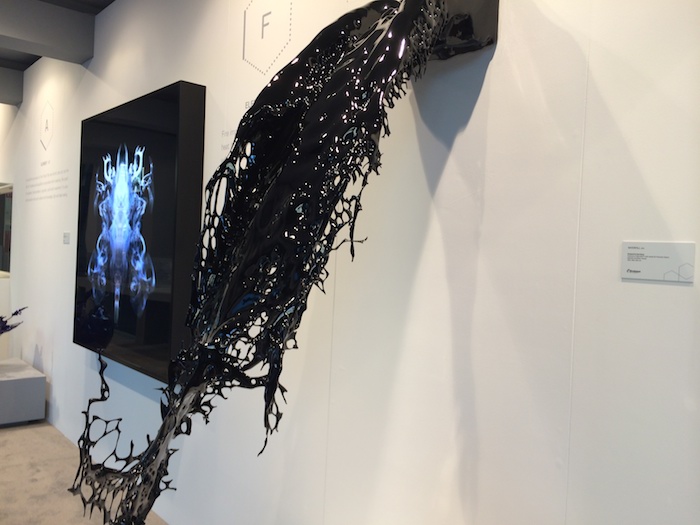 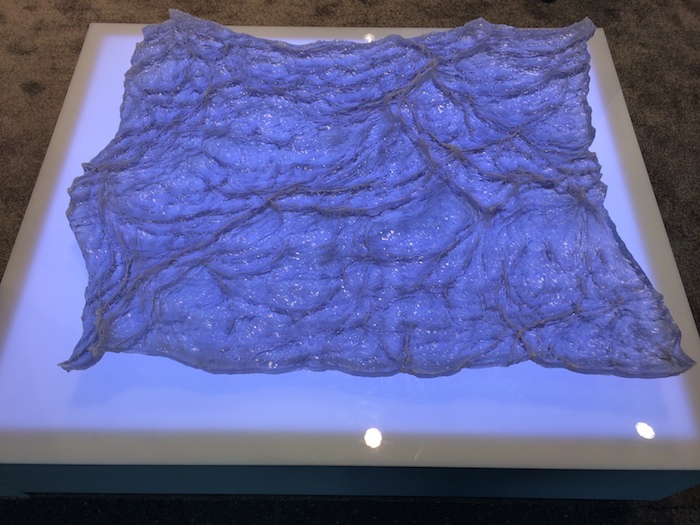 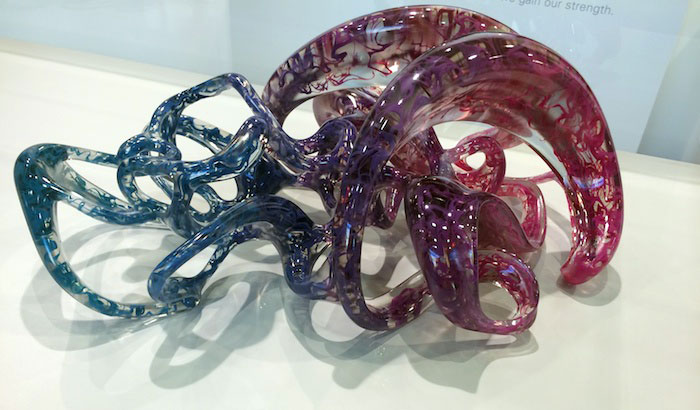 Talking of Stratasys – the company’s presence at Euromold was ramped up considerably compared with previous years, and it seemed like half of the 3000 current global personnel count was there too, manning the three (massive) stands across two halls. Of course it was not THAT many people, but they were there in great number and the message was both cohesive and coherent regardless of who I was speaking to. As ever, the company’s press conference was slick beyond measure and the marketing guys super professional.

The big announcement centred around the product launches that were first introduced a few weeks back. What I hadn’t quite grasped at the time is that these announcements mean that, as of this week, 70% of Stratasys’ product offering is either completely renewed, revamped and / or upgraded— no waiting around, this hardware is ready to go and rolling out now. But the key phrase put out during the press conference, despite many good ones, for me, came from Fred Fischer, who said: “It’s not about WHAT we have on our booth, but WHY we have them!” And the reason is simply this: “We shape lives by revolutionizing the way things are made.”

Before Fred provided keen insight into the new product range and the motivation behind it, though, David Reis had outlined the company’s strategy and vision — focusing on a global remit from a local company. As he explained — we are a global leader in the 3D printing industry, but we are local to companies in the US, we are also local in Europe and Asia. He outlined 6 key strategies that Stratasys is following, namely:

• Accelerate New Solutions to the Market

The ecosystem — or holistic solution — is also key to what Stratasys is doing. This will be facilitated by the two major acquisitions in the last 18 months, specifically Thingiverse and GrabCAD. No visibility on quite how, but what was made clear is that they are the drivers for making it happen.

After the formalities of the press conference it all got even more friendly. I caught up with Arita, always a joy. 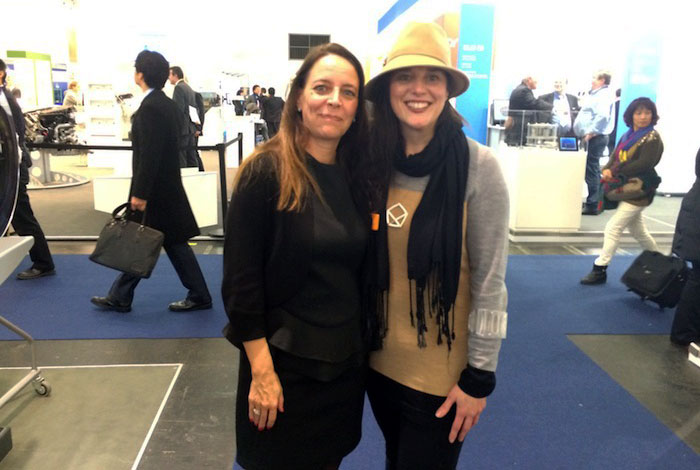 My scheduled interview with CEO David Reis is similarly, always time I genuinely look forward to — his straight forward approach to interviews means it is never hard work and I always come away feeling like I learned something new, even when questions are deflected — there’s something between a twinkle and a glint in his eyes that tells me there’s more — much more coming. I asked him about the past year, the new products and, more pertinently about the appointment of Chris Morgan, what he thinks of MJF, who he sees as his biggest competitor (3DS/ HP / Autodesk were the choices I gave him!), MakerBot (Jenny and Bre), acquisitions, metals, Afinia and more. The transcription might take a while and certainly won’t be tonight, but I’ll get it up ASAP. And it was delightful to chat with Elan Jaglom again, Fred Fischer and Steve Burg at leisure. All insightful – and the latter really, really very funny.

I am not playing favourites here — I stopped by 3D Systems numerous times. Made eye contact with Avi once, but he was inundated all day. I did catch Cathy Lewis very briefly and have time scheduled with her tomorrow. The 3DS stand is always impressive, but it was noticeably more singularly focused on industry this year — no band, only industrial parts on show and the FULL range of industrial machines present, including the new ones, the most startling of which was easily the ProX 400 metal platform: 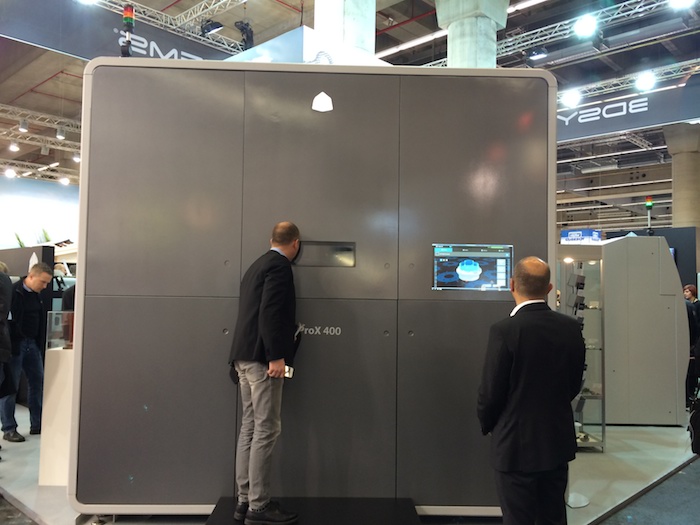 They must be saving the fun stuff for CES — top of my question list for tomorrow.

Earlier in the day I caught up with the Renishaw guys to see what was new there. They were just in the process of pushing out the news of their new EVO Project, but still made me a very welcome cup of coffee (thank you Stephen). At Euromold, caffeine is my best friend. The EVO Project, still only a provisional name, is the unveiling of Renishaw’s much anticipated first additive manufacturing system that has been wholly designed and engineered in-house and thus utilizes the company’s 40 years of experience in supplying high quality equipment for industry. 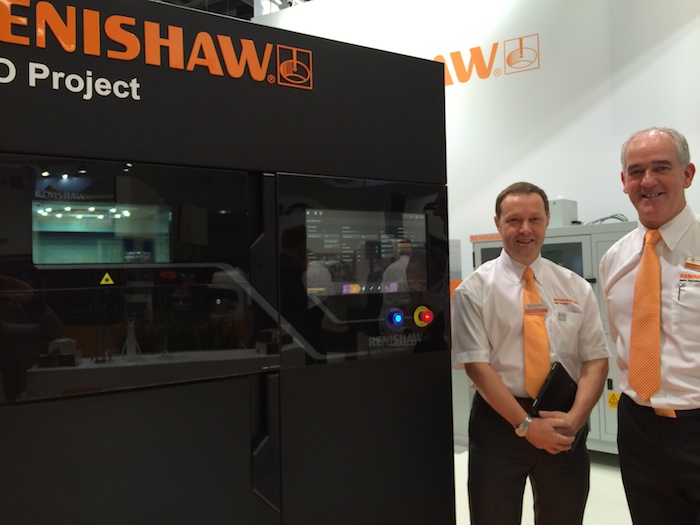 Robin elaborated: “it’s an introduction not a launch ….. because that’s what you do at Euromold!”

This metal platform is fully aimed at manufacturers, for production, and it utilizes the SLM process, as acquired via the MTT deal a few years ago, which is when the anticipation of a new machine began. Notably, the new machine, which will not be commercially available until the back end of next year, is designed to complement and not replace the current Renishaw AM250 system. Robin could not go on the record with all of the details at this point, but the highlights of what he could tell me centre around the significantly more powerful laser (500W) and the integral powder handling and sieving capabilities. It’s been in development for more than three years, and it is testament to Renishaw’s keen reputation for quality that it has been kept below radar until now, when the company believes the quality output is ready for public view. Robin said: “people need to earn a living using this technology and we need to make sure it’s up to the task.” Renishaw is working with 3rd party industrial partners on initial testing with full Beta testing scheduled for next summer. Thus, after implementing feedback the commercial launch will follow.

Voxeljet’s Euromold news centred around new binder materials, specifically Phenolic resin binder that opens up new opportunities when 3D printing with sand on its large frame industrial 3D printers. More to follow on this and I am due to spend some time with voxeljet CEO, Ingo Ederer tomorrow morning. 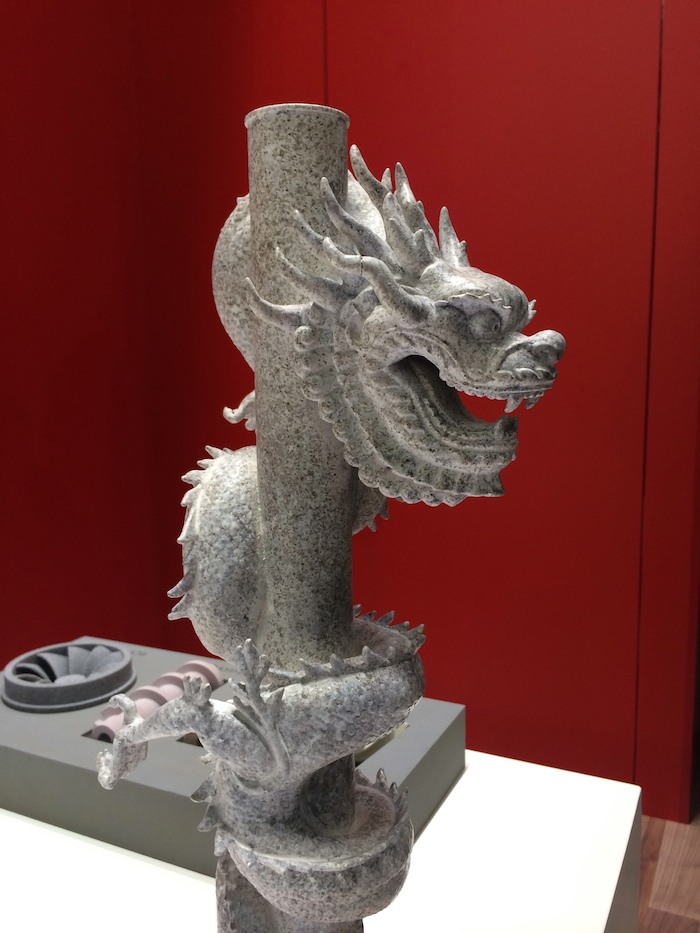 The EOS press conference was about promoting 25 successful years in 3D printing and additive manufacturing, the focus was on significant developments for customers for production applications. There was also a new material,  — the PA1102 black. Again, more to follow. One nice touch was the overhauled pinball machine — with 3D printed, fully functional 3D printed replacement parts. A great demo piece — people visiting the stand were loving that. A novel demo, I thought. 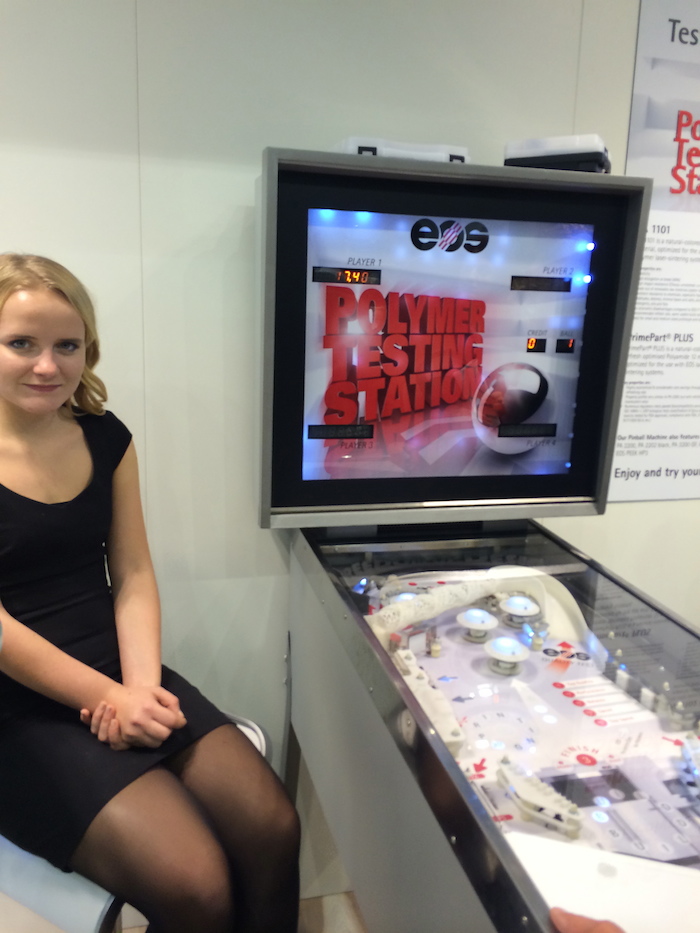 Perhaps the most intriguing stand I saw today was that of Additive Industries. This is the new Netherlands based metal 3DP platform OEM. The company’s presence was a signal to what is coming — denoted by a wooden crate. The big reveal, Jonas Wintermans (Co-founder & COO) told me, will be this time next year. 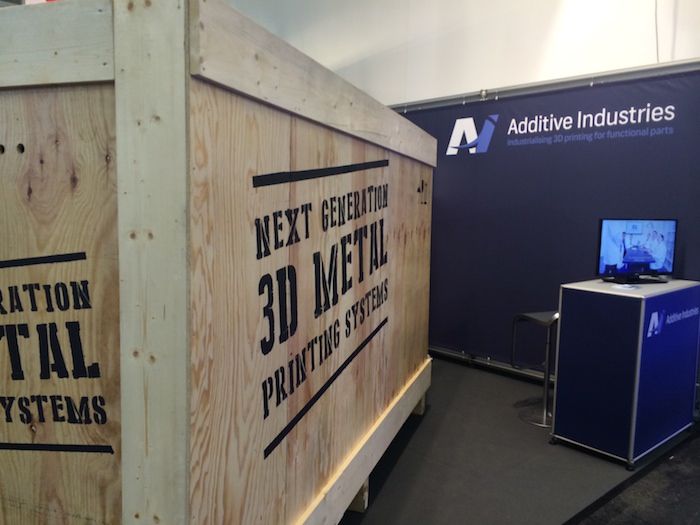 I got to catch up with Deirdre MacCormack of Mcor Technologies who always brings a flash of colour, grace and conviviality to any industrial show. The other lovely Mcor lady was absent, as were a few other Americans, choosing to celebrate Thanksgiving at home this week rather than at Messe Frankfurt. (Good on them!) Big news from Mcor is coming in 2015, I have an inkling as to what it is, but for this show the company was promoting its widespread adoption, increasing applications and focus on education. All good stuff and keeping the stand exceptionally busy from interested visitors. There is also an interesting corporate move to be announced tomorrow. Watch this space ….

I have a packed schedule with formal interviews tomorrow, all of which I am looking forward to — my Dictaphone will be working overtime but subsequently I may just lose the will to live at the transcribing that necessarily has to follow.

But formal interviews and meetings aside, it is the informal meetings at shows like Euromold that make it so enjoyable. Today I had the pleasure of bumping into, accosting and generally pestering some of the best 3D printing people there are, they included Andy Allshorn of At 3D Squared, Jason Lopes of Legacy Effects, Florian Horsch of Delta Tower (among other affiliations), Filemon Schoffer of 3D Hubs, Phil Reeves of Econolyst, Graham Tromans, Fried van Craen of Materialise, Paul Bates of UL, previously Reebok and Andre Wagner of Authentise. Lunch, as has become tradition for the first day at Euromold (revolting food and appallingly slow service aside) was wonderfully spent with Bertier and Vanessa.