Among technological delights such as the Sony PlayStation 4 and Apple’s iPhone 6, the Yahoo! Christmas Gift Guide 2014: Best Tech Gifts also lists the CEL Robox 3D Printer. Indeed, it is first on Yahoo’s list. CEL – a British-based product development company – have just launched their U.S. website for their high-resolution Fused Filament Fabrication printer. The 3D printer has already appeared upon some high profile media, such as Dragons Den, The Gadget Show, BBC in the U.K., as well as USA Today. The Robox also a winner of no less than the 2014 CEX Editors Choice Award. The listing at Yahoo continues the tradition of high profile media success for this 3D printer.

What is gaining the attention of such notable commentators for CEL? 3DPI’s Mike and Rachel covered the initial start-up funding process for the printer late last year. The Kickstarter crowdfunding process was successful. The main appeals of the printer are its high resolution, at 20 microns, up there with the highest for a prosumer printer. The machine also has an almost completely enclosed build chamber for improved temperature consistancy to reduce warping. The print surface is manufactured from PEI laminate material, which requires no tape, glues, etc. The Robox also includes automatic bed levelling via a proprietary bed probing mechanism.

Add to that a high print speed, a propriatory dual-nozzle system with one or two printer heads at 0.3mm or 0.8mm extrusion diameter. To quote directly: “This means Robox® can produce highly detailed exterior surfaces for the surfaces you can see, and then quickly fill the object using the larger nozzle multiple layers at a time without affecting part strength or detail. This combined with a needle-valve system stops ‘ooze’ and ‘stringing’ from the nozzles.” 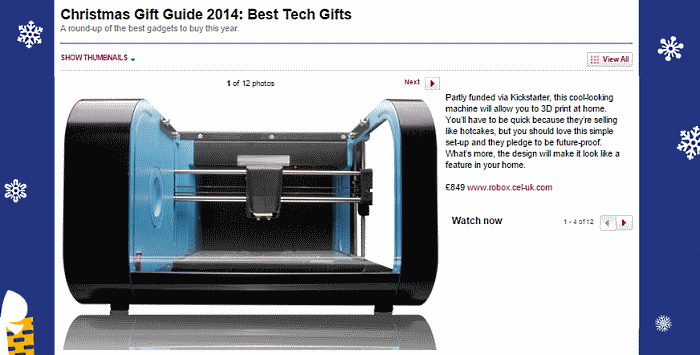 The hardware is complimented with the specifically designed AutoMaker™ software, essentially a ‘slicer’ program. The actual visual design of this three dimensional printer is extremely beautiful. The basic form departs greatly from the standard cube that has become almost standard among recent generations of pre-assembled prosumer 3D printers. With a basic outline somewhat resembling a speech-bubble, or perhaps a ‘Q,’ the smooth curves are delightful, and the tone of the blue adds an additional sophistication — particularly with the cover on.

I’ll leave you with the rest of the specifications of the 3D printer for your perusal. Yahoo! clearly think highly of this printer, and with the various other accolades that the machine has already accrued, alongside the impressive specs, the printer may well find a way into a number of houses via Santa’s sack this Christmas.