Euromold, one of the largest global manufacturing trade shows, is just a week away. So a quick preview of this annual event seems to be in order.

Spread over three large halls at the Exhibition Centre (Messe) Frankfurt, Euromold attracts the great and the good suppliers of manufacturing products, ancilliaries and services, not to mention swarms of visitors when the show organisers, Demat, open the doors on 27th November. The show will run through to the 30th November having dropped its weekend opening times, one assumes from lack of attendance on a weekend so close to Christmas.

Nevertheless, it is a huge draw on the manufacturing calendar and it is often used by vendors in the 3D printing / additive manufacturing sector as the launch pad for their latest offerings.

This year has seen a couple of announcements from 3D printer vendors ahead of the show, namely Mcor Technologies, Voxeljet and ProtoRapid, who have all introduced new or updated systems.

The Mcor Iris is the one to watch for, I think, as it is a new full-colour platform based on the LOM process and using standard copier paper as part material. The Iris was announced a few months back and a few, select parts off the beta machine have been at a couple of shows earlier in the year — they look good. Mcor is working hard at increasing its global reach with new sales personnel, extended distributor agreements, and, my favourite method, hiring Julie Reece as their main marketing person.

Julie, with positive energy in abundance and 100% commitment to the socio-economic benefits of the Mcor process will be in attendance at Euromold as part of her permanent new role. She told me: “I am absolutely delighted to announce that I have joined Mcor as Director of Marketing and will be on hand at EuroMold 2012 in Hall 11.0, Stand B109 to help launch the Mcor Iris, the lowest cost, highest quality, most eco-friendly, TRUE colour 3D printer.” 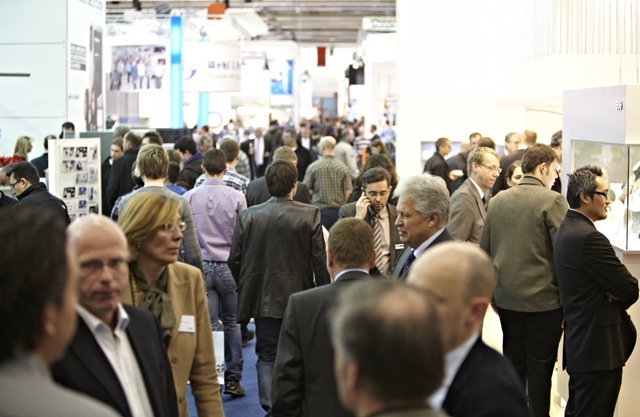 Similarly, Voxeljet announced its latest system upgrade to be demonstrated at Euromold a couple of weeks back — the VXC800 is one of two new 3D printers that will be exhibited at the show. Another highlight will be the much talked about original model of the Aston Martin DB5 from the new James Bond film Skyfall. [Hall 11.0, stand E 62]

Also, Solidscape just last week revealed a new additive manufacturing system specifically targeting dental applications. As part of the Stratasys portfolio, I am assuming this will be profiled on their traditionally large and impressive stand.

I will also be attending a press launch from Objet on the first day of the show — no idea what is coming and all information is under embargo. Although I have been reliably informed that it will not be a colour announcement. Looking forward to seeing what it is though — Objet, in my experience, do these things really well. It will also be great to meet up with CEO, David Reis in person.

I am also hoping to meet some of the other VIPs, including Hans Langer of EOS, Abe Reichental of 3D Systems and Fried van Craen of Materialise who have similarly cleared their diaries to be at the show, which kind of tells you how Euromold is viewed by the vendor companies.

Now in terms of finding out more about who is there and what is on show, it is a bit of a nightmare to be honest. The Euromold website is not particularly user friendly. The maps of the halls are probably the most useful tool for scanning for information. However, it’s easy to miss stuff and I am not convinced it is completely up to date. The exhibitor list is extensive as you would expect, so if you know who you are looking for then that’s ok. If you’re trying to find out who is there, within a certain sector it gets trickier. The product / service categories are absolutely bewildering — there are hundreds of them! There was me thinking that we were down to wrestling between 3D printing and additive manufacturing when it came to useful and understandable terminology for our particular sector, with identifiable application subsets for each. How deluded am I? This just shows why it is vital that it happens though!! The vendors of additive systems and services — from high-end industrial to entry-level — are categorised in any or all of the following, the number of companies listed under each category is in parentheses:

And I am absolutely certain that I missed a few, if you do refer to the product category list for your own preparation ahead of Euromold I am sure you will see where I am coming from. I am convinced the aim is to be helpful, unfortunately the result is anything but. Don’t get me wrong – once on site, the show is absolutely worthwhile, but it’s just a little tricky planning ahead.

Regardless, what is clear is that apart from the companies I have already mentioned above, there will be lots of other 3D printing goodness, including (but obviously not limited to) Makerbot, Asiga, ExOne, Envisiontec, Arcam, Concept Laser, Realizer, Renishaw, Phenix Systems. None of these are surprising, the emphasis in on manufacturing and professional users of 3D printing technology. Which is probably why I haven’t seen evidence of many entry-level systems and, more surprisingly, no sign of Form 1, although I imagine they are busy fulfilling the current order book.

Another notable highlight is the annual Wohlers conference that takes place at Euromold each year. The 14th edition of this conference, entitled ‘Advances in Metal Additive Manufacturing’, will take place on Thursday, 29th November. According to leading industry consultant, Terry Wohlers who organizes and presents, this year’s “conference includes nine speakers from England, Germany, Italy, South Africa and the USA, selected for their expertise in metal additive manufacturing. With differing backgrounds and experiences, each speaker brings a unique perspective to the event. Collectively, they represent decades of knowledge in additive manufacturing and 3D printing.”

It’s going to be a busy couple of days in Frankfurt, but if you’re going to be there, do say hello.

0 0 0 0
More on this topicInfographic: 3D Printing and the Future
More on this topicWill Hybrid Additive/Subtractive Fabrication Devices prove to be the Key to Unlocking an Even More Successful Manufacturing Future?