I’m in the market for a 3D printer.

However, like all journalists (and a certain John Snow), I don’t really know much about anything. So, my selection process involved following advice from my mechanically-minded friends. In particular one friend who is not very susceptible to advertising/marketing and likes to find his information directly from user reviews on the Web. On 3D printers, his advice was to look up Qualup SAS, a company that many will never have heard of (except, of course, readers of 3DPI.com that first reported on the new printer in the making last march) that makes the SpiderBot Delta 3D Printer.

Qualup is a two-person team (man and wife) located in Lugny, in the Burgundy region of France. Most people have never heard of Lugny, even those who live in the closest large city, Lyon prove unaware. So, while I happened to be in Lyon for a Rapid Prototyping conference, I figured I’d take a train and go out to visit Philippe Boichut, the company’s co-founder, together with his wife Myriam. He came to pick me up at Mancon Ville Station, a 30 minute car journey from the SpiderBot factory. 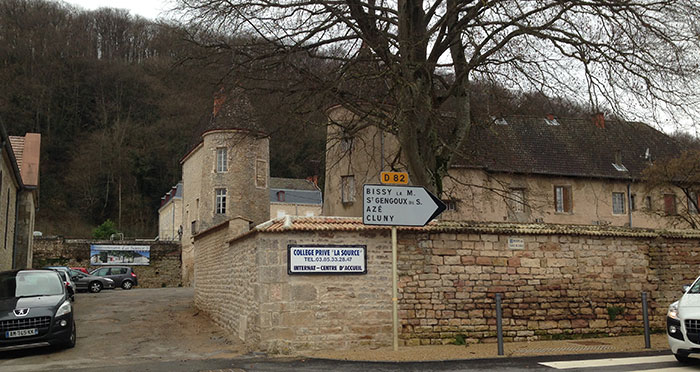 And what a factory! It is located inside what used to be the horse stable of a castle that was destroyed during the French Revolution, some two and a half centuries ago. Inside, the first thing I saw, in the coziest office space ever, was the SpiderBot Delta 3D printer hard at work on four pulleys that looked quite impressive — it was very difficult to see the FFF layer lines on them. 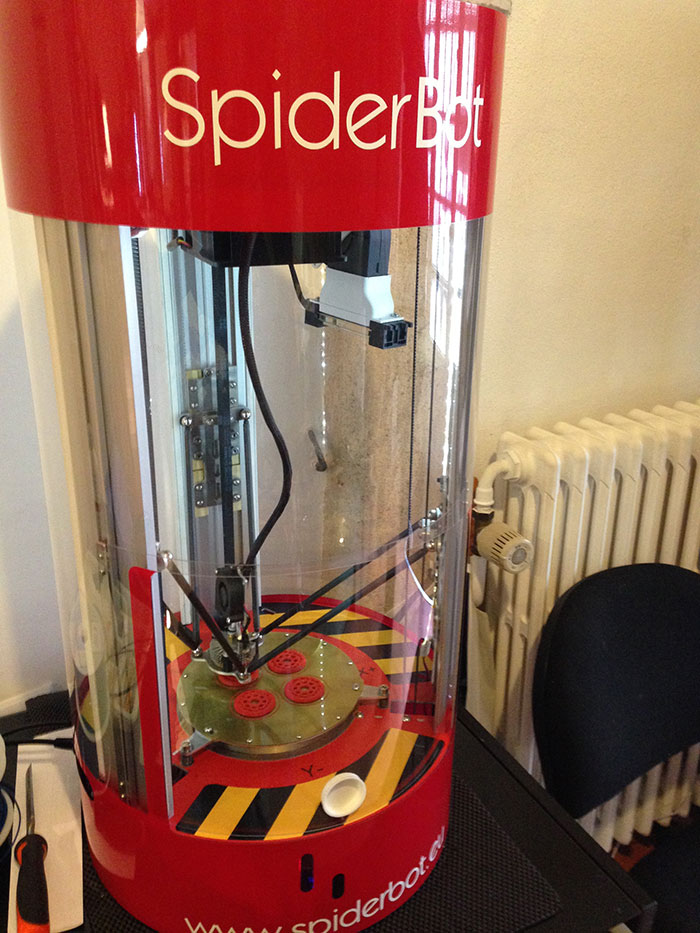 During a nice fish based lunch drowned in abundant Chardonnay, the typical grapes found in this somewhat remote region of France, I asked Philippe, a very nice man in his fifties, to explain exactly how and why he got into 3D printer manufacturing. It turns out he used to be a top engineer for a very large French CAD/CAM company. He was always, however, fascinated by the possibilities offered by the new personal (not consumer, that is still a few years away, he said) 3D printers. So, about three years ago, he started to design his own architecture. First he built a standard RepRap machine but as an engineer, he rapidly figured out that the Delta design is more efficient and precise, with less moving parts that make it less susceptible to deterioration. In fact, he said, it is also simpler to design: just design one column and replicate it three times. 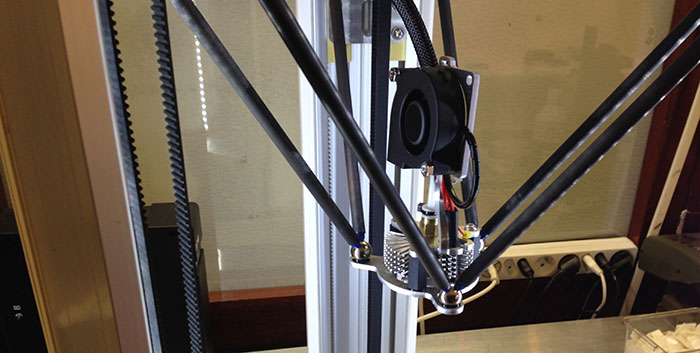 Delta technology has been around since 1985 and is now free to use. Boichut, however, improved the design in one significant way that makes the higher accuracy possible: instead of six ball joints connecting the extruder head to the arms he only used three: that means that the two arms from each of the three columns connect to one single magnetic ball joint and this makes the nozzle a lot more stable and precise. As well as being easier to construct and detach, the full kit SpiderBot also allows for better builds using ABS through a fixed heated bed and by ensuring an enclosed controlled heated temperature. The software used for slicing the model and controlling the machine (KISSlicer and Repetier Host) is either open source or free. 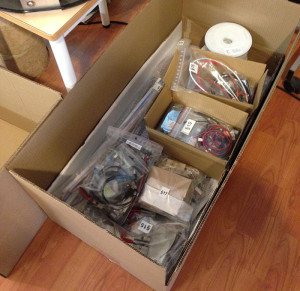 Qualup offers 3D printing services to a few local professionals but their core business is selling the machines. They have sold about 80 in the first six months of business — with no advertising and without participating in any 3D printing shows. Priced at 1,395 euro (for the full kit), it is starting to become a profitable business. Upon receiving the order it takes 2-3 days to ship the DIY kit (which is the only way a Spiderbot is sold), with FedEx offering convenient rates both for the US and Italy (which is what concerned me specifically). Almost all the parts (except the motors and the Arduino board that controls it) are produced locally — we visited the laser cutting company that makes the metal pieces, just a 20 minute car ride away form Lugny. 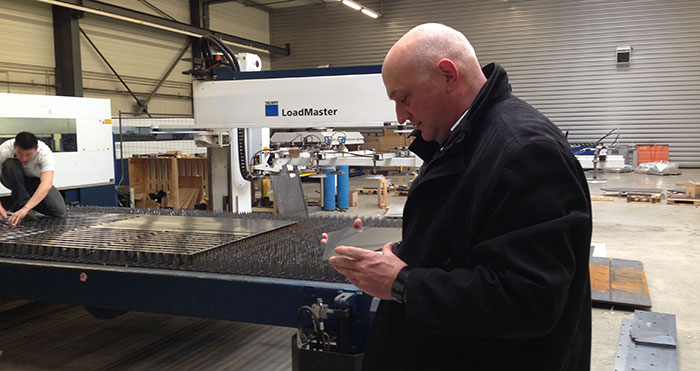 One side-business that is showing a high potential — and this seems to be a deep concern for many people involved with 3D printing in France — is education. Boichut developed (yellow) versions of his Spiderbot, the only ones already assembled they have ever sold, to use for printing and for studying the Delta robotics structure in four French high schools. Boichut feels these are extremely attractive products for education, initially at high school level  but subsequently through to engineering school, and,  all over Europe.

“I think making personal 3D printers will be a good business for the next 4-5 years,” says Boichut, “until, that is, the technology will evolve to the point that it will become interesting for the very large companies to get involved.” 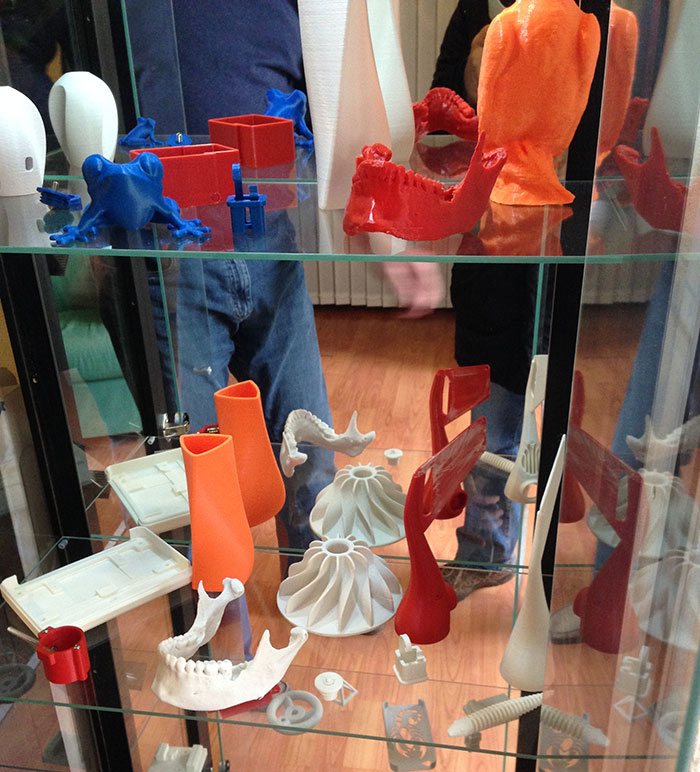