There are a number of 3D scanners already on the market, even some that can be connected to a smartphone for convenient 3D scanning, like the Structure Sensor.  The eora 3D, however, has launched on Kickstarter and is killing it with their campaign, earning more than half a million dollars.  To better understand what this smartphone 3D scanner offers that others don’t, I spoke with Rich Boers, who told me all about how the Aussie team’s green light 3D scanner can be used to capture 3D models of small objects on a tabletop to full body scans. 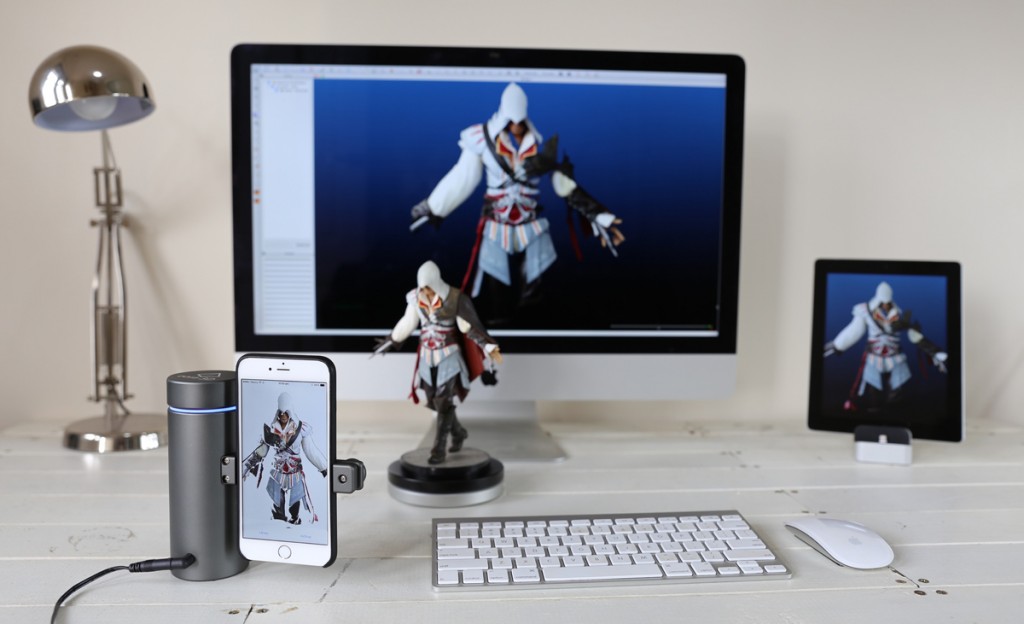 Rich was able to explain the benefits of using a green light laser and how their product differs from two other examples I gave him. “The job to be done of the eora 3D scanner is different to Fuel 3D and the structure sensor. These are obviously very successful and capable devices in their own way. The critical difference between the eora 3D scanner and others is precision,” Rich says. “While photogrammetry and projected light systems are quicker they don’t capture depth the way a laser does. But we went one step further, instead of using a red laser, we’ve chosen the green spectrum. The green laser that we use in the eora 3D scanner costs almost three times as much as a typical red laser found in most 3D scanners. We realized early on that if we were to focus on precision and affordability, which is how every 3D scanner is judged, we would have to leverage every pixel available in the optics of a modern smartphone. CMOS sensors today are built on the work of Bruce Bayer and use something called a Bayer filter. It’s built to mimic the physiology of the human eye. Every modern digital camera has twice as many green pixels as red and blue. It was a matter of leveraging this, and the result is high-resolution 3D scanning with sub-100 micron precision.”

In addition to this precision, other benefits of the eora 3D that struck me immediately were its compatibility and versatility. Unlike the Structure Sensor, which is so far limited to iOS devices, the campaign page lists the eora 3D as compatible with every generation of iPhone and iPod touch, fifth generation and up, as well as a number of Android devices. And, though the Simplify scanner from Fuel 3D can capture quick 3D snapshots, the eora 3D is capable of grabbing full 360 scans of small objects with the help of a tabletop scanner.  More recently, on the campaign page, eora 3D has demonstrated that, without the Bluetooth-connected, automated lazy Susan, it can be used to grab much larger 3D scans.

By using a green laser, the company says that it was able to increase the precision of the scanner, while keeping costs down by relying on the smartphone’s own capacity.  But, though much of the original footage of the eora 3D demonstrated the device capturing small, tabletop objects, since the launch of the campaign, the company has been able to increase the size of its scans. This feature was drive in part by the Kickstarter community, Rich says. “One the great things about launching on Kickstarter is the amount of feedback you get from the community. Within minutes of launching we were getting feedback and support from a lot of people from around the world. Scanning bodies and faces was always part of our roadmap, so we heard our backers loud and clear and showed what was possible.”

He further explains that, the shift from small objects to complete human bodies required a shift in the features of the smartphone being used.  “In a typical full-resolution scan the eora 3D scanner takes a series of pictures that are analysed in real-time to construct a 3D model,” Rich says. “Pictures in this case don’t work for human beings as it is hard for us to be still for up to 3 minutes and any movement causes a messy point-cloud. But every smartphone is also very capable at shooting video, some even shoot at 240fps. So when scanning people we record a video while sweeping the laser across the body in just 5 seconds. We then analyze these video frames to generate a 3D model.”

The Kickstarter has clearly spoken in favor of the eora 3D, but the Australian startup has already received substantial recognition from the Seedstars World startup competition, sponsored by Deloitte.  Having won the regional portion of the challenge earlier this year, they’ll be heading to Switzerland to compete with the rest of the world.  About the next stage of the contest and the next steps for eora, Rich says, “Our Kickstarter campaign has just under a week to go. We can’t wait to ship the eora 3D scanner into the hands of artists, makers and designers everywhere. We have built a community that is almost 2000 strong and learning from these early enthusiasts and enriching their creative processes is at the core of eora 3D as a company.” He adds, “We’ll be heading to Geneva in March to compete as the regional winner from Australia among startups from 30 different countries. We pitch onstage to potential investors and leaders in many fields in technology and business. Winning for us means recognition. We have many backers from Europe so we are planning on attending a few events to meet our backers.”

And, after that, I wondered how the eora 3D will contribute to our collective future, how Rich saw 3D scanning as playing a role in the greater Mixed Reality ecosystem starting to emerge.  Rich says, “3D is just beginning. 3D scanning, 3D printing and mixed reality are beginning to unlock creativity in individuals around the world in surprising and delightful ways. These are technologies that are fundamentally changing the way innovation happens both physically and digitally. Whether it’s GE’s 3D Printed Jet engine parts or the next generation of kids being educated on virtual reality headsets where they are virtually present in the world’s best classrooms, we are only beginning to explore the potential of 3D in our society.”

Thanks to the eora 3D scanner and the dropping price of 3D technologies, I believe he’s right.  This ecosystem is only just beginning and exactly what that ecosystem holds for the future is almost impossible to imagine.  There are still a few eora 3D devices left on the Kickstarter campaign, so, if you’d like to get your hands on one or learn more about the campaign, click here.