Early R&D Points to 3D Printing on the Moon

NASA is constantly testing and developing new game-changing technologies in order to support its quest to discover the universe and space. 3D printing is one of these technologies, along with others, and has been applied already in projects such as the self-assembling space station using SpiderFab and Electron Beam Freedom Fabrication EBF3 reported earlier on 3DPrintingIndustry.com.

Browsing through NASA’s Early Stage Innovation program we came across a program called “Contour Crafting Simulation Plan for Lunar Settlement Infrastructure Build-Up”. The program is built on Behrokh Khoshnevis’s Contour Crafting (CC), which is a technology that automates weaving architecture. Through the use of CC technology the aim for the project is to test it at NASA’s Desert Research and Technology Studies (D-RATS) facility to see whether production of certain elements, such as roads, landing pads and aprons etc. could be 3D printed in extraterrestrial conditions, such as exist on the moon.

Various systems are already being tested at NASA’s D-RATS, including the Lunar Electric Rover; and the proposed aim is to draft a detailed plan of how to use the CC technology together with more traditional systems. All of this R&D activity is to increase the astronauts’ safety, increase the build-up performance, ameliorate lunar dust interference and concerns, and attempt to reduce time-to-commission — all in an economic manner. It will be very interesting to see the results.

So what does this mean? Will we be 3D printing — or Contour Crafting — in space and building houses on the Moon or even Mars? Quite possibly — we’re not prepared to rule anything out at 3dprintingindustry.com. 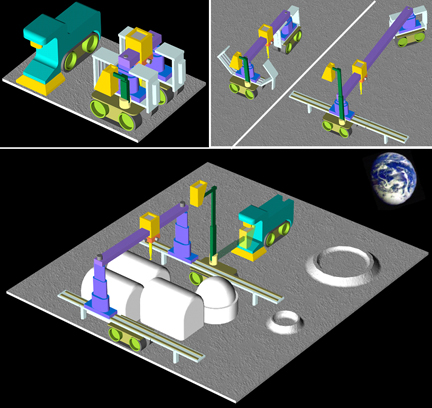