DIY Drones is the virtual home for Unmanned Aerial Vehicles (UAV) enthusiasts and tinkerers. With a passion for all things airborne, this pastime turned lifestyle has traditionally required significant financial resources – with the prices of full, pre-assembled models (we’re talking a very niche segment here) usually in the region  $1,000. However, burning that kind of cash does get you an impressive futuristic hexacopter kit in return, leaving your neighbours in awe — regardless of their age.

However, as is often the case, 3D printing is proving to be an enabling technology that could open the doors of this fascinating aerial universe to many more individuals –  including aspiring remote pilots, who have all the passion required, but not necessarily the financial means to turn those dreams into reality. One project we have discovered is 3D Printed Quad Copter, which pretty much sums up the essence of the idea. It is the brainchild of Mike Bristol, who has combined his love for both 3D printing and unmanned, yet identifiable flying objects. Mike seems like the kind of person to dive in head first to anything he does, at least if the opening lines of his DIY Drone blog are anything to go by: “I finally received my Makerbot Replicator and I am VERY impressed. After printing a handful of objects off of Thingiverse and dialling in my printer I promptly began work on my version of a 3D printed quadcopter”. 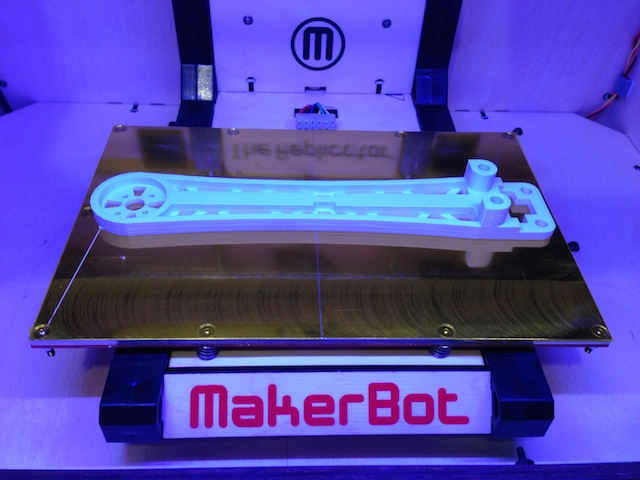 In practice Mike has started to create the basic 3D models needed with the Google Sketchup design tool, which in its barest form can be freely downloaded online. Then through trial and error the digital 3D models have gone through the Replicator — and voilá – ready-to-use parts become manifest. The man behind the project sees this, one of the most important aspects of 3D printing today, to be the key to success – being able to physically test the designs quickly and easily, both visually and structurally. This iterative process has resulted in the up-to-standard arms needed for the copter after only a couple of nights work.

So the process could be assumed to be well on its way to the finish line, if Mike is able to keep this pace up. And based on all this we dare to suspect that, given the choice, Mike wouldn’t have chosen the fastest solution — to order a fully assembled, ready-to-fly model! Mike intends to let other aerial aficionados benefit from this intriguing project. He has promised to share his Sketchup 3D designs when the chopper is steadily in the air, so anybody can have a go at this on their own. Mike’s project is, quite rightly, being closely monitored by both 3D printing and DIY drone enthusiasts, who will undoubtedly follow his process with eager enthusiasm. We here at 3D Printing Industry, representing the former, are very excited to do so and update you as developments continue to evolve further.