When I was in high school, sitting around the dinner table with my friend and his parents, his dad mentioned that he was an anarchist. I don’t remember how it came up, but, because they’re both doctors with strong belief systems, it was likely in a conversation about inequality in the world.   asked him what that meant, what sorts of things an anarchist believed.  He said that, well, for one, he believed that all drugs should be decriminalized. To me, as a high schooler with a frontal lobe still not fully grown, that seemed to go against everything I knew, believed, and everything that was taught to me by the D.A.R.E. program[1]. Since that night, I’ve thought about that comment, trying to decipher it. What would a world where drugs aren’t illegal actually look like? 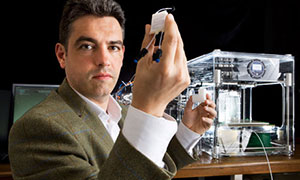 Now that 3D printing, as the manufacturing solution for the web 2.0 era, has shifted the way that we look at almost every industry, that question has become even more relevant. Reason.com recently posted an article looking at the possibilities raised by 3D printers that can manufacture chemical compounds, which would result in the desktop production of medicines and psychoactive substances. The post cites the work of Dr. Lee Cronin, who proposes the use of 3D printers to produce “reactionware” that, capsules carrying “chemical ink” (or chemical catalysts), when printed, cause a chemical reaction to occur, potentially synthesizing your medicine of choice. In the future, users could download the chemical formula for a particular drug and, if they had the chemical inks necessary to manufacture it, could print the drug out in their own homes. As Cronin puts it to Vice: “Imagine the following: 1) you go to an online drug store; 2) you decide what you need (with a prescription); 3) you buy both the blueprint and the ink; 4) the “ink” comes pre-sealed in a safe cartridge; 5) you print the drug with the special ink and the software; 6) you take the drug.”

Such an advancement in 3D printing technology has the potential to revolutionize the medical industry. Not only would printable medicine allow for customizable medical treatment, such that patients could print out doses and compounds specifically tailored for their genome, but, by making chemical formulas available for download by any hospital across the globe, much needed medicine could be brought to remote areas of the world.  The exorbitant prices of HIV medication could be significantly reduced to battle the massive AIDS epidemic coursing through Africa (such a huge problem that it has its own extensive Wiki page). At the same time, the ability to 3D print chemical compounds anywhere and everywhere would, clearly, have a significant effect on the ability to control controlled substances, medical or otherwise.

As the post’s author, J.D. Tuccille points out, Cody Wilson’s Defense Distributed has already shown us that gun regulation may become impossible with the advancement of additive manufacturing. The proposed ability of users to 3D print guns in their own homes, regardless of licensing, makes gun ownership difficult to restrict. His question then is, what will happen to the regulation of chemical compounds? 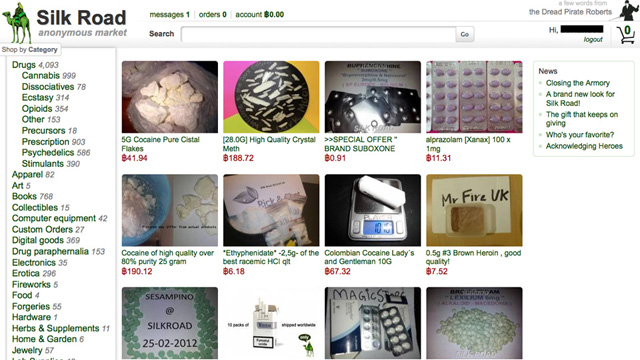 Similar hypothetical regulations to gun printing could be applied to drug printing.  For instance, digital rights management could be used to prevent printers from recognizing .stl files (or whatever file format, possibly .rx?) for illicit substances. As anyone who doesn’t like paying for movies and TV knows, this solution will only restrict people deterred by cease and desist letters.  Dr. Cronin suggests to Vice that “we could make sure the ink is so simple that any attempt to split it open and do things would not work. The amount made and the way it would be deployed would be on such a small scale that it would not be usable for other things.”

Thanks to the TOR network’s anonymous web, black market drug operations like Silk Road already exist, organizing their products like Amazon or any other estore and promoting them the same way any company promotes its products. It’s conceivable, then, that the deep web could provide the same blackmarket solution for desktop drug manufacturing.  3D printing would make it possible for users (pun-intended) to simply download their illicit substance of choice as easily as torrenting Mission Impossible III: Ghost Protocol or Defense Distributed’s Liberator .stl file, which is still accessible on The Pirate Bay.

Reason’s Tuccille comes to the conclusion that regulators will either ban 3D printing altogether or all regulation will fall by the wayside as we enter a “free market” paradise:

Will regulators grow so frightened of a world beyond their laws (not that such a world doesn’t already surround us) that they’ll willingly try to toss out the technologically transformative baby with the organic chemistry-infused bathwater? Honestly, we know that politicians and appointed government officials alike are capable of burn-the-village-to-save-it behavior. But even the most reactionary and obstructionist FDA of the future won’t be able to prevent rare disease sufferers from downloading files developed in Germany, Singapore, or on some seasteading platform and printing officially unapproved medicines. Recreational chemists will, no doubt, upload and download their files through mechanisms like Pirate Bay and Silk Road.

If the research path taken by boundary-pushing scientists lives up to its initial promise, the orphan drug problem may well become a bad memory. And so, too, will enforceable restrictions on chemicals, including recreational pharmaceuticals.

This takes us to a discussion that moves far away from 3D printing, and technology in general, towards the general state of human life on the planet, questions of government, social organization, and other topics that may be better for another venue.  If 3D printing, and the internet, makes modern forms of regulation difficult to enforce, we’re left with a can of worms that causes us to reconsider our entire social structure.

When I grew up, I realized that my friend’s dad wasn’t actually an anarchist, in the Noam Chomsky sense of the word – which implies a sort of non-hierarchical, interdependent social structure where workers own the means of production- but more of a libertarian. Owning a bookshelf lined with work by Ayn Rand, he had swallowed the deregulation pill.

The solution to wanton drug use, as mistakenly assumed by some people, is not a complete dissolution of law and order and an “every-human-for-itself” scenario that will ultimately be regulated by the ebb and flow of the free market, but law and order of a different kind.  Rather, the decriminalization (and not necessarily legalization) of illicit substances is an opportunity to more effectively regulate on the side of the victims of drug use and not on the side of the overly robust prison system. Not through incarceration, but through medical treatment.

Anyone who’s seen drug addiction first hand gets the feeling that addictive substances shouldn’t necessarily be easily accessible (just as anyone who’s seen gun violence first hand might feel the same way about firearms).  And anyone who’s witnessed the effects of good drug counseling knows that there are effective methods out there. In the case of the United States, federal spending used to enforce drug laws and incarcerate drug offenders could be redirected towards treatment programs and preventive care.  Drug rehabilitation programs and even research into anti-addiction medication that might otherwise be used to fatten the already bloated and unconstitutional prison system would simultaneously reduce crime and improve the lives of people the world over. This means a federal government that actually cares about providing for and accurately educating its citizens.

There’s empirical evidence to suggest that a change in environmental factors could help break addicts of their addiction. Perhaps more funding towards better public schools, libraries, parks, museums, and other resources would give citizens plenty of less dangerous options for entertainment other than drug use.  A society that doesn’t marginalize specific groups of people based on class, race, and other factors would have citizens that are less prone to mental illness – depression, anxiety, etc. – that would make addictive drug use an attractive means of escape from a stressful life. In other words, maybe so-called free markets – as the (Koch-funded) Reason.com, with the tagline “Free Minds and Free Markets” – aren’t the answer, but a morally conscious federal government and an informed and politically-active citizenry is.

For a practical, down-to-Earth solution to all problems of government, finance, and human decency, you can always turn to, once-US-presidential-candidate and always-global-citizen, Ralph Nader.

For a cute interview with Dr. Lee Cronin, visit the BBC here.

[1] The Drug Abuse Resistance Education program saw McGruff the Crime Dog going into middle schools and high schools all over the U.S.A. to scare kids into being afraid of drugs.