When I lived in New York, I had a friend, known as “Nuker”, who at the time was a programmer and was also the very first “maker” I ever met. This was the late 90’s so making things was not as common as it is today in the US, but even back then Nuker made quality hardware mods, such as the very first car computer – with a color LCD screen and full desktop in the trunk – I ever saw.

I had not spoken directly to Nuker since I left the US in 2002 but I was certain he was somehow involved with 3D printing. So when he contacted me, after I realized it was him, all I wanted to know was exactly what kind of venture he was involved in: I could never have guessed that it was 3D printed ecigarette belt clips and that this is only the beginning of the story. 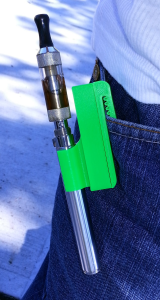 Nuker produces and sells, through his online portal, ecigbeltclips.com, 22 mm battery clips for ecigarettes that he designs with Autodesk Inventor and 3D prints in ABS, with a finely tuned modified 3D printer he sourced, assembled and optimized for high quality results.

The clips, available for $24.99 (plus $3.50 for shipping anywhere in the USA), are sturdy and flexible and they look and feel like a mass manufactured product; Nuker even offers a 6 month guarantee on it. This is one of a growing number of products to successfully make it beyond a desktop 3D printed prototype directly into desktop 3D printed manufacturing. 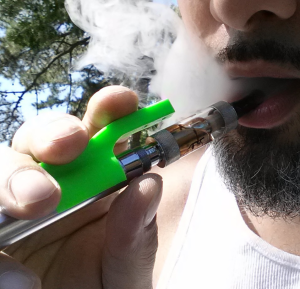 Other examples I can think of include clips for bicycles, accessories for the home, cell phone cases (of course) and even fish lures but the fact of the matter is that producing valid, mass appealing commercial products at home is still something that only a few people are able to do. I definitely think this is a trend destined to grow because, if you have the right idea, margins can be very interesting.

“3D printing has given us the ability to make things that make our lives a little simpler. It’s not just about trinkets and gadgets”, Nuker told me. “I want to show that you can use 3D printing to make things as strong as anything you can buy in a store, only you cannot buy it. For me it’s great because materials are really affordable and people are really happy to buy it at the price I sell it.”

As strange as that sounds, the ecigarette industry might be another big area of growth. “There is an entire movement of people modding and making their own systems: Nuker explained that all you need is a DNA30 or SX350 board, which is kind of a simplified Arduino system, and some readily available components to assemble. “Many of these people use the vaporizers to quit smoking cigarettes and most of them go as far as using just flavored vapor, with no nicotine at all,” Nuker said.

than any mass manufactured one. Others may follow his example and some have already done it but the objective is opening up the market by offering a product more people would buy.

Saying that 3D printing might disrupt the tobacco industry may be an exaggeration at this point. Some big tobacco companies are also now starting to establishing a direct presence in the ecigarette market, while, at the same time, some of them are lobbying to make these, seemingly harmless, products illegal. Their resistance is similar to that opposed to services such as Air BnB or Uber, although, if everyone will be able to manufacture their own, it would end up being quite futile.