The victims of the Haiti earthquake have endured a nightmare, but life will be just that little more bearable for one single mother with a tragic story to tell. Now she has received the first medical-grade 3D printed prosthetic arm from Create Prosthetics and can look forward to a better life.

Danis Exulise was forced to cut off her own arm after her home collapsed on her in the earthquake of 2010, as she attempted to rescue her niece. She was buried under the rubble for seven hours before she made the heart breaking decision that none of us should have to face. 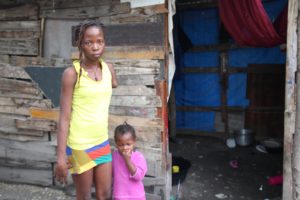 Now she lives in a shack in a displacement camp in Haiti, together with her child. It’s tough, but in June Create Prosthetics teamed up with Healing Hands for Haiti and the Enable Community Foundation to give her an arm that weighs just two pounds, which will give her and her child a better life.

This is a new breed of prosthetic and that is lighter and optimized to give the patient the best possible quality of life. Create Prosthetics also worked hard on the finished look to create an arm that isn’t immediately obvious, which can do wonders for the wearer’s self-esteem.

Company founder Jeff Erenstone said: “We have found a niche that a 3D-printed prosthetic arm fills very well. Other prosthetic arms may be more functional, but our arm is very attractive and easy to become accustomed to. If an amputee has trouble with other arms, they may want to try ours.”

A beautiful moment in harsh Haiti

Erenstone recounted a moment that brought him to tears, when Danis’s daughter Sundine kissed her prosthetic hand. “You have to understand how important that moment was,” he said. “It means that her daughter has accepted the prosthetic as a part of her mother and not as an attachment or appliance. You wouldn’t walk up and kiss a toaster.”

Create Prosthetics can now offer transhumeral and transradial prosthetics that are fully 3D printed, which means they can be tailored to the individual and offer a superior fit and finish, as well as a lightweight construction. The kits are on sale in North America and the company is working with charities around the world to help people just like Danis.

Giving back to the world

Many people in trouble spots like Haiti simply cannot afford a prosthetic limb, which can cost tens of thousands of dollars, and there is no viable service to turn to in a lot of these places. 3D printing can help slash the costs thanks to the reduced number of fittings, material waste and other benefits, but it is still beyond the wildest dreams of someone living in a Haitian displacement camp.

This was Create Prosthetics’ fourth trip to developing countries and other recipients of the 3D printed prosthetics can be found in Nepal and India. 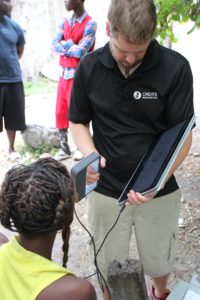 Erenstone and his team have already committed to two more trips to Haiti and Nepal during the summer of 2016. He said: “We’ve been working with ECF and other groups for years to get prosthetic devices to people who need them most. It’s just part of being world citizens and we are honored to help.”