Construction is a huge deal in the 3D printing world right now and the likes of WinSun have made an impact with the first 3D printed office in Dubai. It also printed a five-storey apartment building and 10 3D printed houses in just 24 hours back in China. This villa is a still a breakthrough though, because it was built on site.

Most 3D printed houses are made in parts at a nearby facility and then transported to the final construction site for assembly, almost like flat pack furniture. It is a massive step forward, but the elephant in the room is still the transport costs. So this new construction is a landmark venture in its own right.

The Chinese company has produced its own proprietary technology to 3D print cement and the result of their hard work is a two-storey villa that is three meters high. It took 20 tons of C30-grade concrete to lay the foundations and walls that are 250mm thick. The building can withstand an earthquake up to eight on the Richter scale, which would level most buildings.

“It’s just another breakthrough 3D printing can provide to architecture,” said its makers with typical modesty.

How the printer works

The printing system itself is made up of four modular units. The electronic ingredients mixer feeds the concrete into a blender. Then there is a transmission system and the 3D printer head.

“We have used a traditional reinforced concrete material to 3D print the villa without any additives,” said a spokesperson. “This means we don’t need to customize the material, which helps lower the costs as we can use locally-sourced cement at any location.”

The house is printed around a steel frame, so the whole construction process changes. In this instance the steel was cut off site and transported, but in the future the house should be printed as one structure. 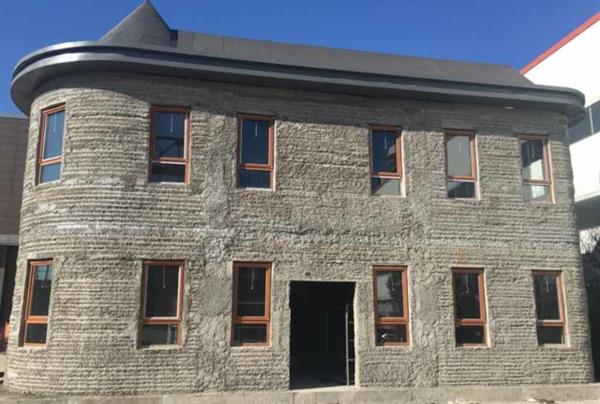 Construction time cut in half

A house of this nature would normally take three months to build and on the first attempt the company reduced the build time to 45 days. As printers get more efficient then this will inevitably come down and that means that labor, material and transport costs will all plummet.

The company wants to use this technology to provide better housing for the poorer inhabitants of rural China. One of the great ambitions for 3D printed houses is to improve the living conditions for the poorest people and give everyone a home. What this will do to the propery market is unclear, but it has to have a major impact.

This construction method means that we can do so much more with a design, technically speaking, as well. So we can all have bespoke, extravagant houses that suit our character and our particular needs.

The flat wall could become a thing of the past as we engineer curved surfaces, complex facades and decorative structures. This is all possible now, but the costs are simply prohibitive. Once that barrier is gone it will be interesting to see how people use this technology to create a new style of house. In some countries resale values could determine how brave people get, but if the cost of construction comes right down even that might cease to be a factor.

This technology has the potential to create upheaval in the construction industry on an economic, social and aesthetic level. We’re just not sure how much of an impact 3D printing will have and, indeed, it will be allowed to have on the housing market around the world.

We do know, though, that the winds of change are blowing hard right now.