According to a report from the Consumer Electronics Association (CEA), the group behind the enormous International Consumer Electronics Show held in Las Vegas every year, about 76% of 3D printer owners use their machines daily or several times a week.  The study, titled “Eye on Emerging Technology: 3D Printing”, takes a look at consumer 3D printing around the globe, determining how consumers are aware of and perceive the technology, as well as how they might use 3D printing and how price changes effect their perceptions of it. 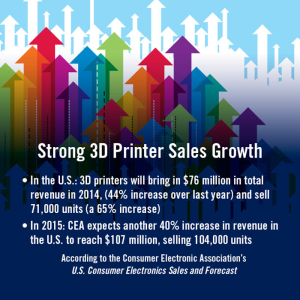 Director of industry analysis for CEA, Steve Koenig, believes that the technology could have a huge impact on the consumer market, saying, “3D printing is an emerging technology that has the potential to change the world. As 3D printers evolve with new inputs, features and lower prices, they could transform the consumer landscape – much like MP3 players impacted the music industry.” In the CEA’s U.S. Consumer Electronics Sales and Forecast, the association projects that the technology will be responsible for $121 million in worldwide revenue this year, $76 million for the US this year, which is a 44% increase compared to 2013.

Koenig adds, “Strong 3D printer growth will be driven by increasing consumer demand, technological development and higher levels of competition. Revenue from sales is unlikely to grow as quickly as unit sales, though, as increased competition and market segmentation are likely to cause a drop in prices – a win for the consumer.” The growth that the he is alluding to is about 38% in the US through 2018, which will add up to $175 million in total revenue, according to CEA.

CEA also looked into the awareness of 3D printing in the US, with 23% of online adults reporting familiarity with the technology and 51% reporting unfamiliarity.  As far as the applications for 3D printing that potential users might pursue, the CEA study outlined that 52% of respondents would print household goods, 51% would print smartphone cases, 49% would make jewelry, 48% would create clothing, and 45% would print toys. Koenig sees this trend growing, “We expect consumer familiarity with 3D printers to grow as more and more large retailers begin to carry the devices. This is great for retailers as it creates an ‘attraction’ for consumers to come see 3D printers in action in the store.” 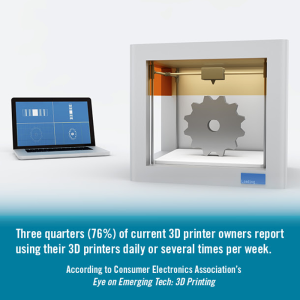 It’s pretty interesting to see how often 3D printer owners use their machines, too.  7% of owners said that they use their printers once or twice a month; 18% use them once a week, and 76% use them daily or a few times a week.

All of this implies that the 3D printing industry is on track for a whole lot of growth in the consumer market, but, because I don’t have $1,000 laying around to purchase the 628 page report at the CEA store, I can’t examine it further.  I can tell you that the sample size of the report is 1,000 adults in the US and that CEA is probably a bit biased in favor of seeing the consumer market for 3D printing expand, as they host CES every year and, next year, will be doubling the size of the 3D Printing Marketplace at their show.