The Cavity Skateboard: Printed In One Single Piece

Let’s say you go to architecture school because you like designing houses, but then, you decide you want to make a skateboard instead. Your square, Midwestern uncle would probably say, “Only in California!” For once, your no-good, know-it-all uncle would be right because when Jac Currie, Tas Oszkay and Mo Harmon met each other at the UCLA Masters of Architecture program, they came out of it with a skateboard, not a house.

The program had its students playing around with 3D printers, to create models of buildings for representational purposes, but California has this effect on people where, when it’s sunny out all of the time, you just want to be outside doing something. When Jac, Tas, and Mo all moved to California, they got back into skateboarding. And, being immersed in this western wonderland of both technology-driven design and skateboarding riff raff, it was natural for them to fuse the two together. The result of this cross pollination was Cavity Boards, with Jac as the Media Specialist, Mo as the Geometry Specialist and Tas as the Fabrication Specialist – though those boundaries are likely not set in stone.

Most skateboard decks[1] today are made up of about seven layers of wood, depending on the quality, glued together and compressed in a vice-like mould. Using design tools Rhino and Grasshopper, the Cavity Boards team built their first board up layer by layer, not dissimilar to the process of traditionally manufactured skateboards. As Jac and Mo explained via email, “For us the layer design process was a way to logically control the geometry. Each layer has some intent of porosity, structure, and graphic pattern. We can stack and even merge the different layers to form a cohesive body.”  3D printing has the added benefit of yielding an intricate product that wastes less material, they say. 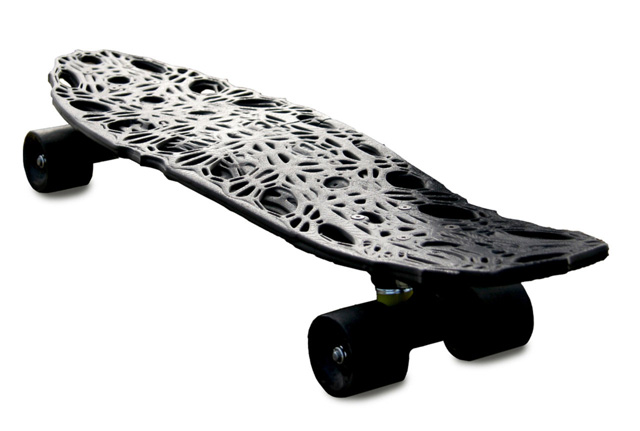 Unlike their scale models of buildings, 3D printing a skateboard had a scale ratio of 1 to 1; the printed object wasn’t just a tool for representation, but came out of the printer as a functional piece. This was made possible by Solid Concepts, using  the Fortus 900mc industrial 3D printer,  the largest FDM platform available. Their first Cavity deck was printed in ABS and, as you can see from the video below, it works quite well, but the team plans to produce their next prototype in laser-sintered nylon, which is much more flexible and much stronger.  Then, they’ll start getting their boards out onto the streets with a wide range of models.  Because Cavity Boards are unlike any other board I’ve ever come across, I don’t think they’ll have any lack of customers for a while.

[1] The actual body of the board