Broken Down Powerlines? 3D Printed Robots to the Rescue

Even though some companies, with consumer electronics manufacturers at the most public forefront, have eagerly showcased TV’s and other appliances working on induction or other truly cordless solutions, the majority of the world is still pretty much stuck with powerlines and cords making our surroundings inside and outside our houses less aesthetically pleasing. Even though Tesla’s dream of electricity being distributed in other ways lives on, the cables are here to stay, probably for a long while yet. They also break down or can be brought down by disasters of different kinds. And because this world wouldn’t function at all well without electricity, the broken down lines have to be fixed as soon as possible. 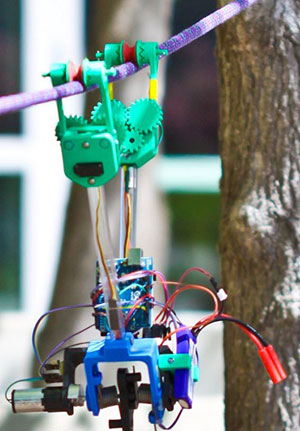 Unfortunately, checking utility lines for damage is not as easy as it might sound – especially in vast open areas where the lines are not necessarily on the ground, but are out of order in a more subtle way. Besides using engineers’ trained eyes to hunt down for break points, unmanned solutions are also used for the process, such as different kinds of inspection robots and unmanned helicopters with infrared tech. Sound expensive? That’s because it is, but if it were up to students from Jacobs School of Engineering at UC San Diego, another more simple and inexpensive solution could be applied – enabled by 3D printing, of course.

The project is called the SkySweeper and it has been designed by grad student Nick Morozovsky from the university’s mechanical engineering department, in the lab of Professor Thomas Bewley. The V-shaped robot, which could potentially be manufactured for less than a $1,000, is built out of simple off the shelf electronic parts with the plastics having come off of an FDM 3D printer. Inexpensiveness, functionality and efficiency have clearly been priorities for the designer himself during the creation process: “Current line inspection robots are large, complex and expensive. Utility companies may also use manned or unmanned helicopters equipped with infrared imaging to inspect lines. This is much simpler,” Morozovsky stated.

Although a bit crude – or to put it another way, suitable as an early prototype – the video below demonstrates nicely how the SkySweeper would work in practice, accompanied by its inventor explaining the functionality of the robot.

Even though passing the structural support poles for powerlines is an obvious phase of the inspection process where an unmanned solution could prove particularly useful, the powering issue with the SkySweeper  is quite ingenious, as Morozovsky explains on the video – when moving along an electrical line, the robot could be equipped with components – induction coils –  essentially a self-powering system that generates electricity from the electric field itself to keep the SkySweeper going.

This is not the last you’ll likely hear from the SkySweeper or from Morozovsky – after competing in the Road to Maker Faire challenge (and placing as a runner-up), the inspection robot and his human master are soon travelling to Tokyo to showcase the project at the International Conference on Intelligent Robots and Systems, or IROS 2013, from November 3rd to 8th, and will present a paper on the subject as well.