More shoe designers are experimenting with 3D printing, and many of them are collaborating with 3D printing service provider imaterialise to produce their footwear. Granted they’re not your everyday, throw on pairs. But for anyone with a shoe fettish (that would be me, and I KNOW there are others!) they are captivating and produce involuntary ooo’s and aaaah’s …. You may have noticed that original shoes are a guilty pleasure of mine, 2nd only to hats, even though, these days, I’m not sure I could successfully wear them, and by successful, I mean not fall over and embarrass myself!

The shoes in the gallery below come from Katrien Herdewyn, who, it seems is an extremely busy lady — as well as working on her PhD in Physics, she is also studying Shoe Design at the Academy of Fine Arts, Sint-Niklaas (SASK). Her shoes are largely experimental, but she says of her work: “The main theme of these shoes is nano technology. The inspiration came from my studies: I studied electrical engineering, material sciences and nanotechnology at the University of Leuven.”

Another pair of new shoes comes from Marieka Ratsma who previously gained recognition for her Biomimicry shoe, which she created in cooperation with Kostika Spaho. More recently, Marieka has launched ‘Juxtapose. According to the designer: “When visiting Boston last September I was amazed by the amount of trees in the area and in particular their shape and size. The contrast they give with the skyscrapers is breathtaking, because despite their contrast they work really well together. To incorporate this feeling into my design I decided to combine different techniques and materials. The bottom of the shoe was made via 3D printing, the top is handmade. I believe that the future of design can surprise us when there is contrast, and craftmanship and new technique come together.” 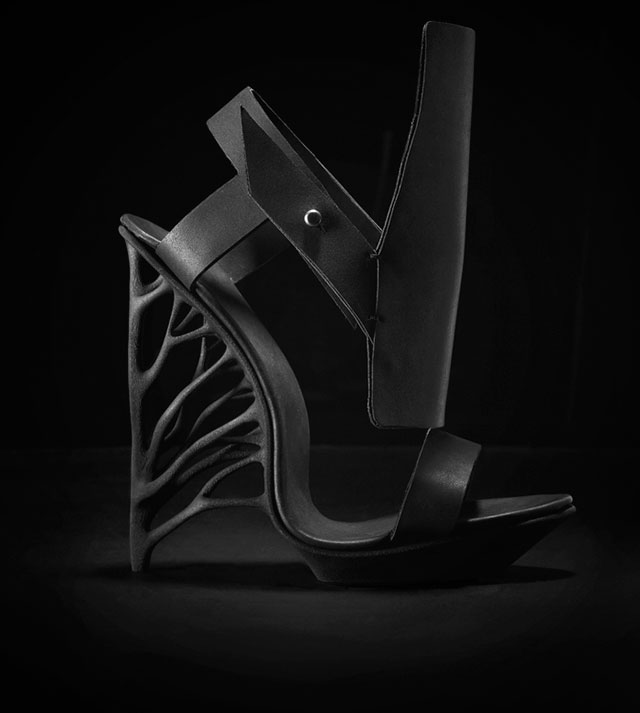 Manuel Vogel’s ‘Bone Shoes’ are rather compelling. Originally from South America but living and working in Berlin now, Manuel told imaterialise about the concept why he chose 3D printing to explore his design vision: “The shoes are part of my diploma project called FABRIC FUTURES. I wanted to show the aesthetic and complex side of free and organic forms, such as bones. Therefore I realized digital solids with oversized claws and gills in front, striking ribs along the side of the shoes and a spine-structured heel. I am fascinated by the freedom and possibilities the 3D printing technology is offering and I am convinced that it is one of the most promising technologies of the future.”

Well, hard to argue with that, although I know some of you might! 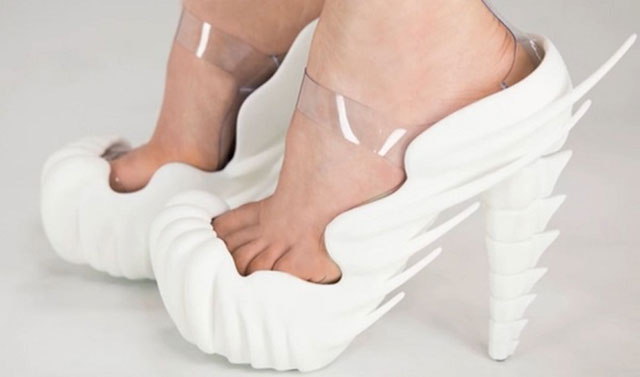 Below is a video highlighting Manuel’s entire range, not just the 3D printed ones ….

These designers are all working with 3D printing as a direct production method for their shoes, or parts thereof. However, as Mike’s article today illustrates, there other ways of successfully utilising the technology to achieve the desired aesthetic, made of the material of choice, when it comes to shoes. And what this shows, rather nicely, is that 3D printing is a great tool, a means to an end, it is not necessarily the end itself.