Barclays Eagle Labs has linked up with MyMiniFactory to take 3D printing to the masses with sponsored Fab Labs throughout the UK. Could this be the push that 3D printing needs to go mainstream?

It could turn out to be a big deal for the maker community and help 3D printing gain a foothold with the general population. Arguably the world’ biggest curated platforms for designers, in partnership with a bank, will make headway in a hurry.

Of course the scheme is in its infancy and there are just a few labs up and running, but Barclays wants to have 20 fully equipped labs by the end of the year.

3D printing remains a niche hobby, but Barclays and MyMiniFactory want the art of making to be much more accessible to the general population. If we’re going to have a 3D printer in every household in the end then as an industry we need the general public to embrace it. So this program is a massive step in the right direction.

By checking designs and making sure that people can simply download the file and print the object, online platform MyMiniFactory is on a similar mission to simplify 3D printing. Its designs will be available to Barclays’ users online and at the labs themselves.

Romain Kidd, MyMiniFactory CEO said: “The MyMiniFactory team works hard to offer the best 3D printable content and execute on our vision of being the reference platform for browsing, discovering and downloading high quality 3D printable objects from the best designers. I look forward to collaborating with the Digital Eagles community on this initiative.” 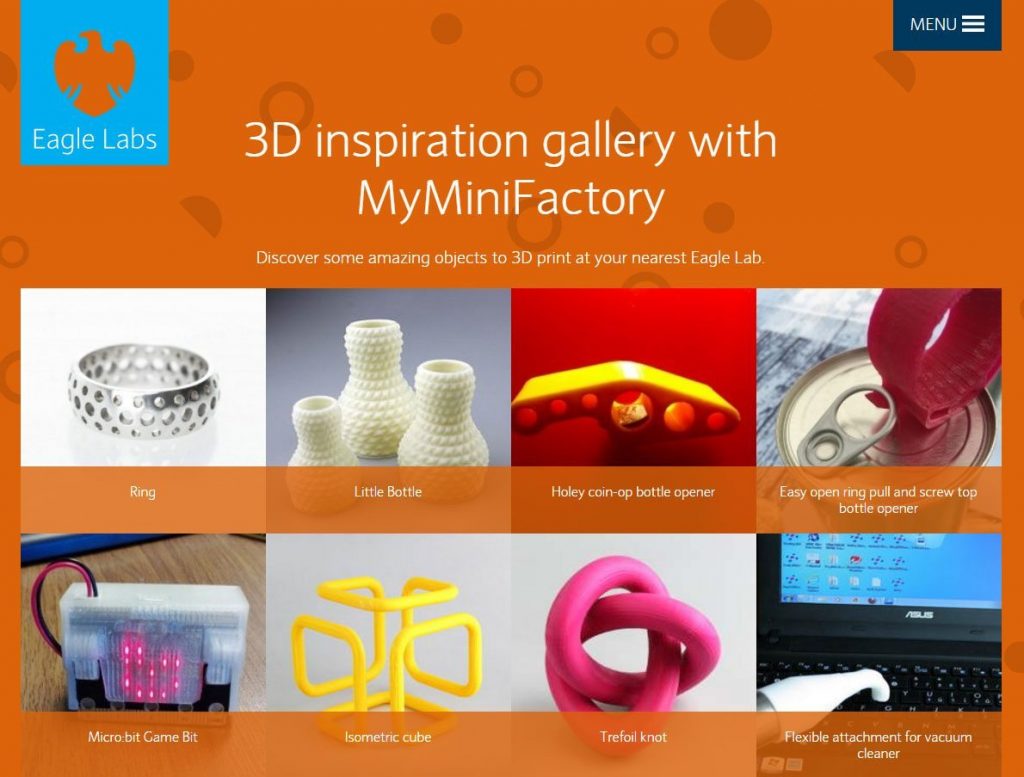 Digital Eagles was a simple idea, at first

Barclays Digital Eagles program started from the simple premise that a lot of customers simply couldn’t manage online banking and other services, so the bank decided to help them with basic computer skills. But it has grown quickly and its Barclays Eagle Labs are taking things to a higher plane altogether.

These physical spaces across the UK will have the latest 3D printers, laser cutters and co-working spaces. They will also have business development facilities tied in with the labs, which include business incubators, mentors and specialist loans for fledgling companies with high growth potential.

So entrepreneurs that need to fabricate prototypes could make full use of Barclays equipment and MyMiniFactory’s expertise, before launching their business to the wider world with the bank’s assistance. If nothing else, it’s a ringing endorsement of 3D printing’s ability to help entrepreneurs get their ideas off the ground from a company that can actually do something to back them.

It’s community outreach that benefits everyone

Of course you don’t have to be in business to make use of the facilities and Barclays Digital Eagles want to make modern technology available to everyone. The bank revealed that 47% of Britons never update their IT skills once they have finished their education.

So providing what are, in effect, drop-on computer training courses helps Barclays with its community outreach and is an effective way to connect with local people. The tech and code course mean that Barclays is going well beyond 3D printing, too, and could help people forge a new path in troubled financial times.

Pilot schemes in Bournemouth and Cambridge proved so effective that a third lab opened in a disused Barclays in Brighton recently. The bank is aiming to have 20 labs up and running by the end of 2016.

We’ll keep an eye on this project and we’re sure it’s going to help the industry as a whole. It’s a small step, but we think it could be an important one when we look back in years to come.

The industry needs to reach out to the general public. Simply preaching to the converted will keep 3D printing on the periphery, so we’re fully behind Barclays drive to bring additive manufacturing to the man, women and children on the streets of Britain. Indeed, we hope others take inspiration and do the same around the world.