Apple has just been granted almost 70 new patents, including new 3D mapping technology. The latest batch of technical documents gives some insight into what the Cupertino, California based company has in store for the future.

The patents include positioning technology for improving mobile communications, biometric sensors and a 3D mapping system.

U.S. patent number 9,677,878, Scanning Projections and Image Capture Modules for 3D Mapping, was granted on June 13 2017. The 18 page document describes how a 3D map of an object can be created using,

The device projects a pattern of spots, in what elsewhere might be referred to as structured light. In the Apple patent other methods of 3D scanning and mapping are described as using a laser speckle – or random pattern – and an imaging detection unit. Processing of this image data by the appropriate algorithm results in a 3D map. 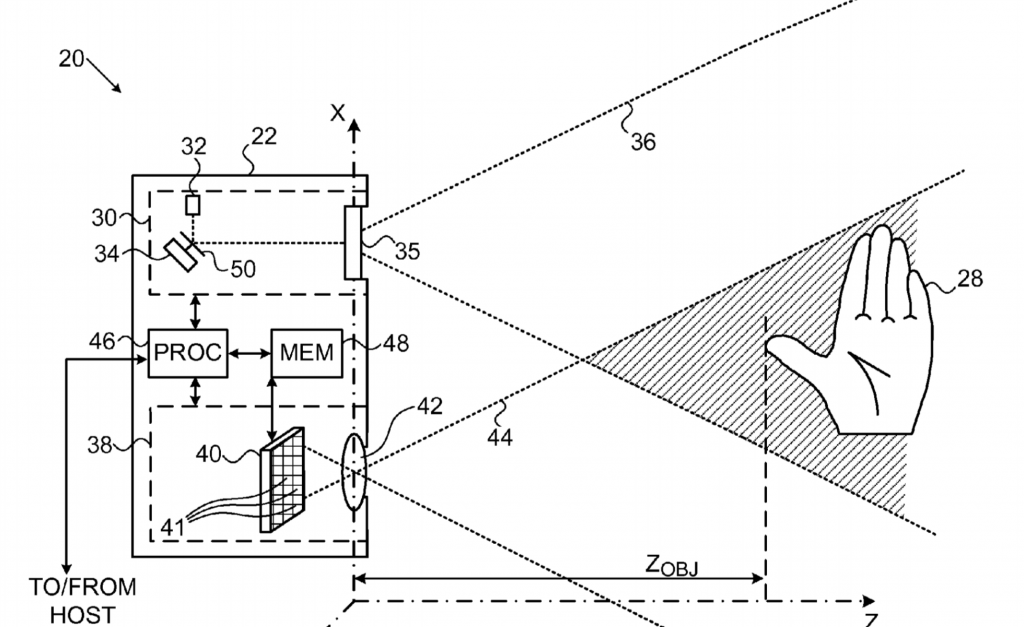 3D mapping can also be conducted using a fixed pattern of spots.

The Apple patent states, “The processor is arranged to derive the 3D map by finding respective offsets between the spots in the captured image and corresponding reference spot locations belonging to a reference image of the pattern.”

One illustration in the patent shows the device in use in what appears to be a recreational setting. Similarities between the Microsoft Kinect system are likely to be drawn. Indeed in 2013, Apple bought PrimeSense – the company who developed the 3D sensor inside the Kinect. Therefore it comes as little surprise to see Alexander Shpunt, co-founder of PrimeSense, named as one of the inventors on Apple’s new 3D mapping patent.

Also, the Kinect can be adapted to use as a 3D scanner.

Cook says that Apple’s focus on autonomous systems is a, “core technology that we view as very important.” The Apple CEO also describes the venture into automotive as the, “the mother of all AI projects.”

Interestingly, Google has just announced that after 4 years of work on the Waymo/Firefly pod-like driverless cars, the company will now focus on working with automotive manufacturers rather than go it alone.

Apple write that the new patent is intended to give an example how the 3D mapping apparatus may be used. However, the “invention is not limited to what has been particularly shown.” Apple claim that any variations or modifications that might occur to a skilled person reader the patent should also be included in the scope.

In the wider tech world Apple has received criticism – and occasional praise –  for patenting rounded corners and a paper bag.

Let us know your thoughts in the comments below about the Apple’s 3D mapping endeavors and the wider issue of intellectual property as a barrier, or boost, for advancing technology.

For all the latest news about 3D scanning and 3D printing industry, follow our social media accounts and subscribe to our free newsletter.