AON 3D: An Industrial-Grade 3D Printer for the Demanding Prosumer

Before AON 3D developed and launched a Kickstarter for their AON 3D printer, the Montreal-based company ran as a printing service bureau. After becoming increasingly frustrated with the flaws within consumer-grade 3D printers, they decided to create an industrial-grade solution. AON 3D seems to be acting as a bridge between the two, but there’s a good reason for playing that role as individuals using 3D printing for professional means search for higher-quality machines. 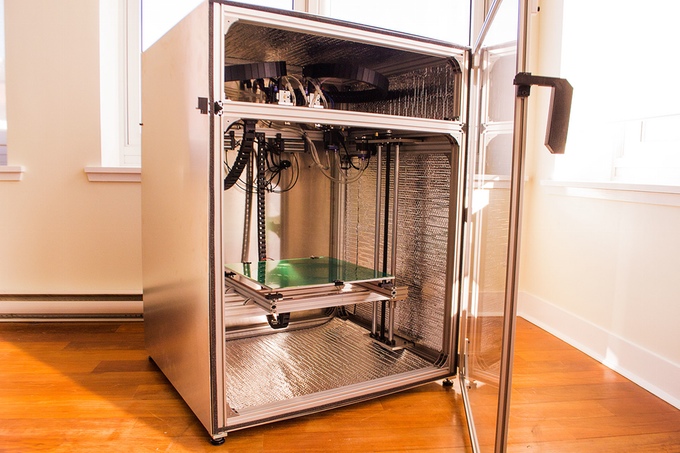 The AON contains some impressive features such as two independent tool heads, allowing for multiple prints at one time or  multiple colors in one print. By engineering the tool heads to function independently of one another, the AON also claims to have solved the issue of material waste that often comes packaged with other dual extrusion systems. The AON is equipped with an actively heated build chamber, which ensures minimal warping on print surfaces. In addition, AON 3D has implemented hot ends that are able to reach 450 degrees Celsius, allowing for high-performance 3D printing in PLA, ABS, nylon, and polycarbonates of all types.

But what personally excited me the most about this 3D printer was the impressive build volume of 450mm x 450mm x 640mm, which exceeds the volume of most 3D printers on the consumer market. AON will utilize Simplify3D software and each printer will also come with a Raspberry Pi preloaded with Octoprint, allowing the printer to be used via WiFi.

For the build volume and features, the price of $5,500 for one of fifty of the first AON 3D printers seems like a decent bargain for potential Kickstarter supporters (considering that AON 3D will follow through with their 3D printer). AON 3D is hoping to raise $48,678 through Kickstarter in order to help set up their production facility and to also help make the printer more ‘economically viable’. Acting as the middle child of the 3D printing industry, the AON 3D printer seems to have the high-quality performance of its older brother Industrial 3D printing, but the accessibility and pizzaz of his younger brother Consumer 3D printing. Keep yourself updated with their development by following AON 3D on Twitter!  And check out their Kickstarter page here.