Additive Industries is a young Eindhoven-based company, funded in part by the Dutch Government, seeking to make 3D printing as accessible, reliable, and affordable as possible. Recently we covered their partnership with 3DSIM on the development of software catered to their next generation metal 3D printing system. Now, the time has come for the first information on that system to be made public, starting with the machine’s name: MetalFAB1.

On the first day of the Rapid 2015 show in Long Beach California, the company also showed a short introductory video to reveal some of the features of the MetalFAB1, including multiple lasers, automated build plate handling, and controlled recoating.

“Our system will bring a substantial improvement in reproducibility, productivity and flexibility as a result of our quest to design an industrial grade metal printing process,” said Daan Kersten, CEO of Additive Industries. The company intends to market the system to demanding markets like aerospace, defense, medical, high-tech equipment, tooling, and automotive and, to do so, it has focused the development process on guaranteeing high reproducibility of results. This is achieved through a solid machine design in combination with continuous, automated calibration. Predictability is achieved by combining simulation and in-process quality monitoring of the core additive manufacturing process. The system also promises greater stability, less manual labor, and, thus, greater safety. 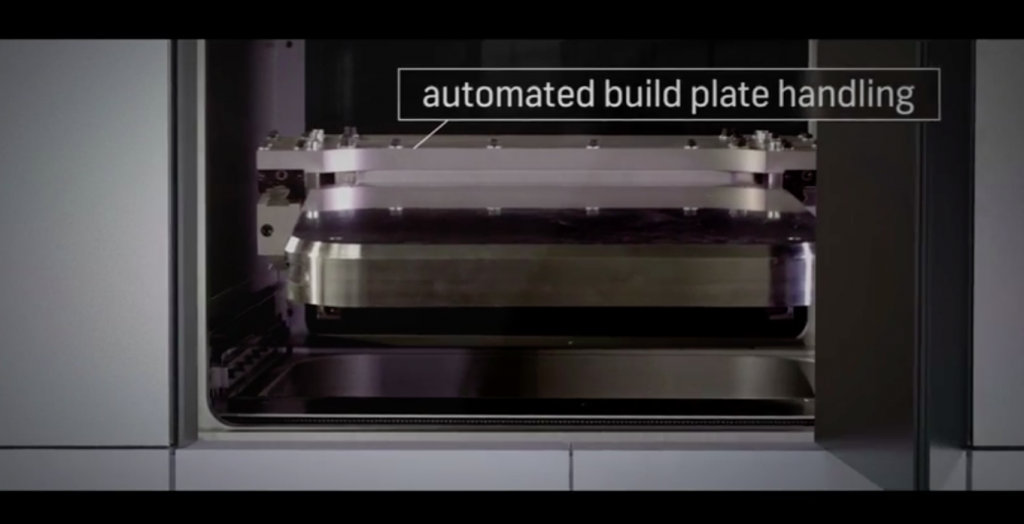 The machine has been developed with an open and modular architecture, meaning that it can be used with several different materials and that new modules can be added to allow the use of multiple materials in one machine, without having to clean the powder system and running the risk of cross-contamination. While Additive Industries is one of the first companies in a while to present a new, commercially available metal-based 3D printing system, the MetalFAB1 has been developed by a team of experienced engineers with backgrounds in 3D printing and high-tech equipment development including semiconductor lithography, electron microscopy, and medical scanning systems.

While it is often true that companies in 3D printing (and elsewhere) overestimate their production capabilities and fail to meet the announced new product launch dates, Mark Vaes, Technology Manager at Additive Industries and leader of the MetalFab1 development project, confirmed the company is “on schedule to launch the machine in the fourth quarter of this year”. That would mean that it might just make it in time for a hardware presentation at Euromold… or Formnext. It would be a great opportunity to kick in the next gen of metal 3D printing.