New York artist Shane Hope has developed an exhibition of his work called Nano-Nonobjective-Oriented Ontographs and Qubit-Built Quilts, which is currently being hosted by the Winkleman Gallery. 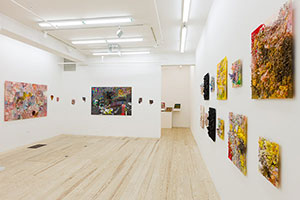 Shane’s work seeks to embody the technological present in terms of 3D printing with a nod to R&D being conducted at the nano scale for technological advancements in the future. To this end, ‘Shane Hope uses molecular modeling research software and crafts custom code to grow generative molecular designs and algorithmically automate alternative representations of nano-scaled structures. With intent to literally convert digital bits back into atoms and properly relate the operative ideologies of 3D-printing to the research and development of theoretical nanofacture, Hope has hand-hobbled together from scratch a number of RepRaps (3D printers) which he uses to materialize (or literally to print) his amassing cache of newfangled nanomolecular models. Hope collages together thousands of these 2D rendered and 3D printed models into painterly compositions depicting things organic, inorganic, synthesizable, theoretically feasible, nonsensical, and nonobjective.’

The resulting collection of art work can be viewed in the gallery below for you to peruse at your leisure. Better still, if you can get to the Winkleman Gallery to see them up close, there is still time; the exhibition is live now and running through until May 4, 2013.

Shane Hope received his MFA from the University of California San Diego in 2002 and has attended the University of California Los Angeles, the San Francisco Art Institute, and the Skowhegan School of Painting and Sculpture. He has exhibited at Virgil de Voldere Gallery in New York; I-20 in New York; Project Gentili, in Prato, Italy; iMAL (interactive Media Art Laboratory) in Brussels, Belgium, Rosamund Felson Gallery in Los Angeles and Susanne Vielmetter Los Angeles Projects. His work will be featured in the Fall 2013 exhibition entitled “Dissident Futures” at the Yerba Buena Center for the Arts in San Francisco.