Stratasys has today revealed how global model-maker of props and costumes for the film industry, FBFX Ltd, has increased its business since bringing Stratasys 3D printing technology in-house. The UK-based film specialist has just disclosed details of how its Stratasys Objet30 Desktop 3D Printer was critical in designing complex components for the space helmet used by leading actress Noomi Rapace in the recent Hollywood blockbuster film, Prometheus. You know how precious Hollywood can be about its secrets ahead of the game! 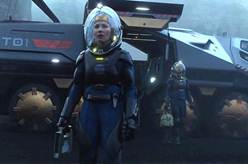 With more than 20 years’ experience in model-making for the film industry and working with many of the world’s leading film directors and designers, FBFX recently invested in a Stratasys Objet30 Desktop 3D Printer to enhance its in-house prototyping capabilities. According to Grant Pearmain, FBFX Managing Director, the company has been investing in new technologies to outpace the rapidly-changing requirements of the film industry:

“The film industry is rapidly moving towards digital – more and more 3D files are coming in, so we’ve had to align our in-house resources to meet this demand. We can now take 3D data and quickly 3D print a model for our customers to hold in their hands and make design changes if necessary. Having this capability puts us on the frontline, and in this business, having the most cutting-edge technology in-house can be the difference between being called upon for a multi-million pound movie or not.”

The work for the Prometheus film is a case in point. When designing the space helmet for lead actress Noomi Rapace, complex geometries were required when creating mating patterns to ensure the fit and lock of the helmet onto the space suit. A traditional model-maker could typically take weeks to produce such precision, however, armed with a digital toolkit, FBFX was able to quickly create a 3D CAD file of the helmet and 3D print a model in a matter of hours using its 3D printer. 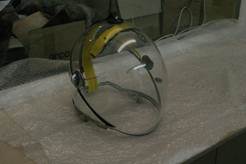 “When it comes to creating accurate models, 3D printing is revolutionary in the industry when you think of the traditional methods we used to use,” says Pearmain. “As you can imagine for the Prometheus helmet, the cast were not always in the same place at the same time, so to be able to rapidly recreate a 3D model, in such a supremely accurate fashion, was integral in the design verification phase.”

Pearmain continues, “Once we had the 3D CAD file, our Objet30 3D Printer was crucial in finalising the space helmet design, specifically to create the patterns for the collar and helmet locking rings. This type of job would have previously been outsourced, costing us time and money we did not have. However, having the 3D printer in-house allowed us to perfect the design and provide a more comfortable experience for Noomi without worrying about missing deadlines.” 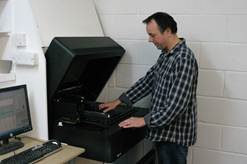 FBFX purchased the Objet30 Desktop 3D Printer through UK distributor Tri-Tech. Paul Webber, Sales Director at Tri-Tech, adds: “When we first heard that FBFX needed to bring prototyping in-house we knew that an Objet Desktop 3D Printer would be the ideal solution. The requirement for fast modelling and the extreme level of detail needed for film made it an obvious choice.”