3D Hubs has returned to kick off 2016 with their latest Trend Report. Like 3D Hubs itself, the Trend Reports have been slowly evolving to include even more information.  For their January 2016 Trend Report, that hasn’t changed, as 3D Hubs adds new measurements with which to digest the roughly 25,000 3D printing hubs in their global network. 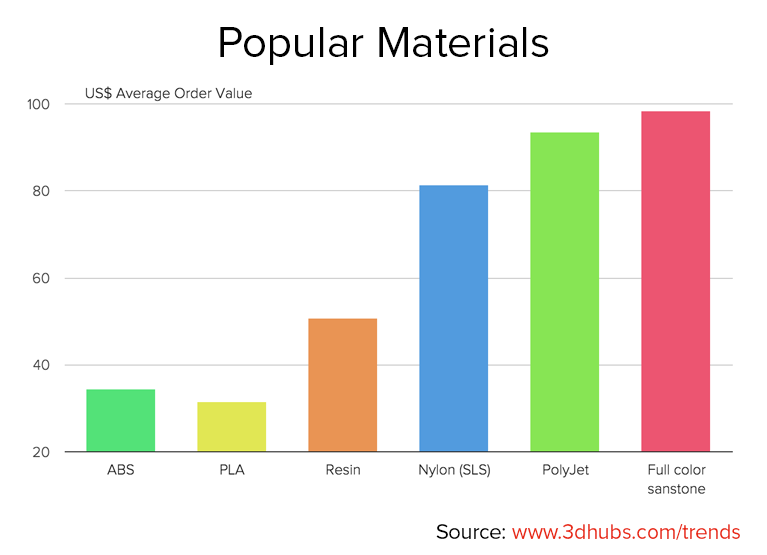 Reflecting the addition of new, exciting printing processes to their 3D Hubs HD network, the January Trend Report features a new “Average Order Value per Material” metric, which communicates the average order value for common 3D printing materials. You’ll see from this chart that plastics make up the least costly orders, while full color sandstone represents the most expensive orders at just below $100 per order. Selective Laser Sintered (SLS) Nylon and PolyJet resins are the next most expensive at and average of $80 and $93.4 per order, respectively. Looking at the releases from CES this year, however, this could soon change with companies releasing new low-cost, full-color 3D printers and XYZprinting showing off their inkjet-style machine.

Uniquely, this month, a printer called the PowerSpec 3D Pro has moved from being ranked #9 to #1 as the highest ranked desktop system. To be honest, I’ve never heard of this machine before. It has the resemblance of the many MakerBot clones that started being produced in China a couple of years ago, but, looking into it, the PowerSpec range is sold by Micro Electronics, Inc., the owner of the Micro Center computer retail chain. This is interesting because Micro Center has made numerous agreements to sell 3D printers from other brands, as well.

The Form 2, released by Formlabs at the end of last year, remains popular on the distributed 3D printing network.  Last month, it was the “most wanted” 3D printer and, this month, it is the #1 trending machine, with a 133.3% growth rate since December. The Objet Eden260, new to 3D Hubs, is the site’s highest rated industrial 3D printer, and the Prusa i3 was rated as the most popular printer, finally knocking the Ultimaker 2 from its nine-month reign.

New York is the number one 3D printing city in the world, hubs-wise.  This comes as the 400th NYC hub was unlocked, making it so that there are more 3D Hubs than McDonald’s locations in the city.  Makes you wonder just how popular a distributed cooking network would be… Finally, the Channel Islands are now on board the distributed manufacturing train. 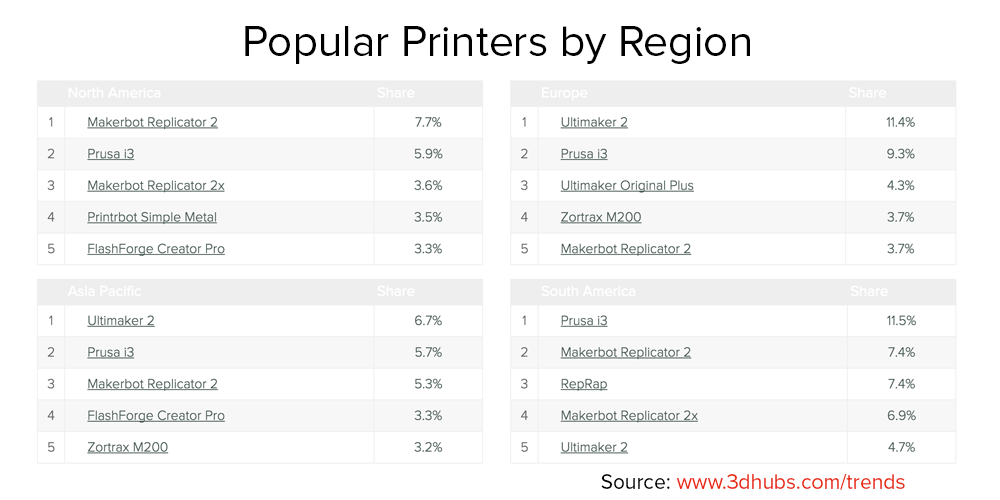 To gain more information about the insights gleaned from the ~25,000-hub strong community, head over to the Trend Report page.  If you need me, I’ll be starting a distributed cooking network.