When we talk about the satellites orbiting the earth the image that comes to most people’s mind often resembles a small-scale space station with reflective mirror panels and antennae sticking out. The lesser-known fact is that the research community is using a type of miniature satellite for research purposes that are often launched as additional cargo together with large scale satellite launches. 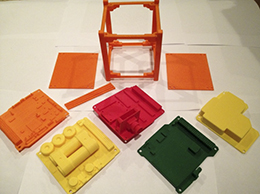 These CubeSat satellites are a commonly used form of mini satellite that were originally created to enable graduate students to get hands-on experience in designing, building, testing and operating a spacecraft in space. However, the original one litre cube format (10cm per side) that can be constructed using mainly off-the-shelf components has since became a standard within the academic community.

Several academic institutions are currently building these CubeSats using 3D printers for multiple purposes. One such example comes from the thesis and feasibility study from the The Faculty of California Polytechnic State University, presenting the findings on the study of using 3D printed materials in CubeSat flight missions.

The key findings were summarised as follows: “This study has found that a CubeSat can be developed to successfully incorporate the use of 3D printing manufacturing techniques into its design. This technology provides a potential cost savings of thousands of dollars, even for structures that would be simple to machine.” The thesis concludes, “further, extremely complex shapes and even working mechanisms can be produced with 3D printing processes that cannot be manufactured with conventional machining. This allows designers to create parts that require no post processing or assembly, streamlining the entire production process.”

For those who wish to see the mini CubeSats in action and the various applications developed inside them, please have a look at the video link below. The video is a part of the ESA Education programme, where seven CubeSats were flown on the first qualification flight of Europe’s new Vega launcher.