3D printing technology often brings applications that showcase the most incredible forms or the most complicated functions. Rarely are we confronted by an application that fullfils both — beautifully.

Today we are highlighting just such an application in the form of a lamp designed by Dr. Margot Krasojević. The 3D printed nylon polymer lamp is suspended by a spindle whereby it’s weight and form contribute to the angular momentum vector as it spins along its axis of rotation; it is affected by minor environmental changes such as temperature and/or air currents which rotate the light along its path of velocity. The light has a motion sensor diode clamped between both suspended 3D printed sections which powers the battery and subsequently lights the LED when in motion.

As a result of its form, which is stunning it has to be said, the light speeds up due to its conservation of angular momentum, the form of the light reduces its rotational inertia affecting its rotational speed which must increase to maintain constant angular momentum resulting in a brighter light. The light has been influenced by the physics behind an ice skater spinning and weighs 145g.

The light is comprised of two vertical elements which lock into one another using clamps, as the light turns a dynamo transforms kinetic energy from the light’s movement into electricity that is used to power the LED. This dynamo is an electrical generator which is clamped between the two 3d printed vertical elements, so that when they spin the movement is turned into electricity, the faster the light spins the brighter the LED.

Also in consideration is the application of a piezoelectric zinc element which produces a current as the light rotates, this current is strong enough to light a 1.5V LED. Investigations in the field of semi-conductors contribute to affordable, sustainable lighting for the future, a technology that is one of the design criteria for this light series. 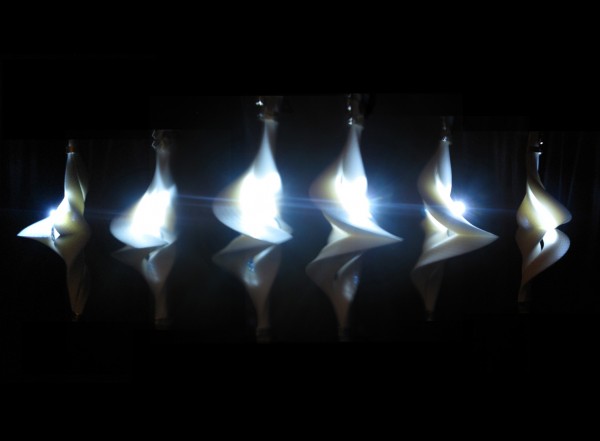 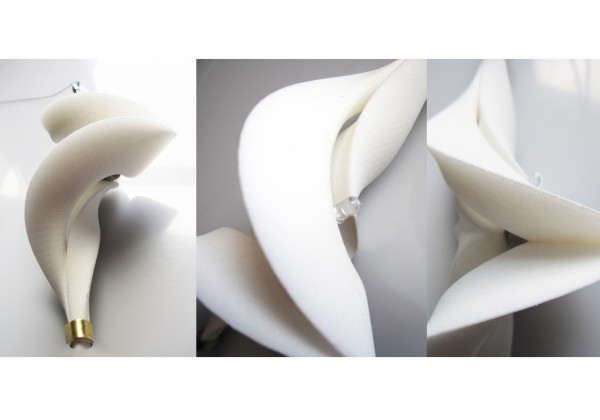