The 3,245-year-old burial chamber at the tomb of the Egyptian 18th dynasty Pharaoh Tutankhamun, who ruled the ancient kingdom 1332 BC – 1323 BC has been 3D printed by the company Factum Arte. The chamber is the first in a series that will be replicated by the company in an act of preservation for the leading tourist attractions. The burial chamber of child king Tutankhamun receives up to a thousand visitors a day in a space just sixty square meters, causing much degradation to the site. Once again 3D printing comes to the rescue.

The tomb was unearthed in a 1922 discovery by Howard Carter and George Herbert, 5th Earl of Carnarvon to amid worldwide press coverage. A surge of renewed public interest in ancient Egypt followed. Exhibits of artefacts from this tomb have toured the world.If Tutankhamun is the world’s best-known Pharaoh, it is largely because his tomb and artefacts are among the best preserved. In his foreword to the 1977 edition of Carter’s The Discovery of the Tomb of Tutankhamun, Jon Manchip White wrote: “The Pharaoh who in life was one of the least esteemed of Egypt’s Pharaohs has become in death the most renowned.” 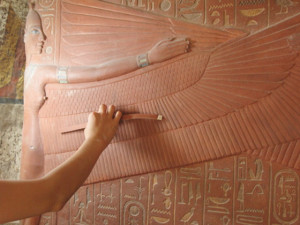 If a modern rate of tourism was maintained, the tomb, the wall art, and many other precious elements would eventually be lost to us. The very breath of visitors and the temperature and humidity changes caused by their presence has resulted in parts of the tomb’s plaster and paintto crack.

Factum Arte has used digital photography, three dimensional laser scanning and 3D printers to recreate the murals on the walls of the burial chamber with phenomenal precision. Laser-scanning recorded some 100 million points of information per square meter to read every last detail, from the stunning artwork to even the cracks in the walls. All of these details were then 3D printed to recreate the world famous site with as much precision as possible.

The high resolution recording and production of an exact facsimile of the Tomb of Tutankhamun is part of a major initiative by the Supreme Council of Antiquities to preserve the tombs in the Valley of the Kings, while making important tombs that are either closed or in need of closure accessible to the public and to scholars.The project was launched by Egypt’s Director General of the Supreme Council of Antiquities, in collaboration with the University of Basel, The Friends of the Royal tombs of Egypt, the Foundation for Digital Technology in Conservation and Factum Arte.

The five-year project has been filmed by the BBC for a special documentarycalledA New Tomb for Tutankhamun. The documentary’s producer Joanne Whalley said: “The tomb walls of the original are very cracked and undulating so the 3D [process] captured the cracks and dips of the surface.” The show’s presenter, Rajan Datar, has said: “This is the future of cultural tourism. During the past hundred years many antiquities have been exposed to too much human presence and unless that is restricted they are going to collapse completely. The mindset has to change amongst tourists.”

Factum Arte is working on similar projects to replicate the tombs of Queen Nefertari, regarded as the most beautiful Egyptian burial chamber, and Seti I, which is seen by archaeologists as the most important for preservation. 3D printing will again provide the solution to this pressing problem, and open up a debate upon whether location based tourism for extant ancient sites has a future – or whether 3D printed replications, which may be housed anywhere in the world, will come to be an emergent, and in time primary, niche in the tourism sector.