Before the show, even before all the attendees were confirmed, I was able to obtain an advanced list of the attendees from one of the committee members.  What I saw made me eager to attend because the list included several large corporations, including Samsung, LG, and HP!

We arrived early the first morning of the show, but were a little disappointed at what we found.  Even though we met several interesting people and saw some pretty impressive displays and exhibits, those large corporations that I hoped to see were not really in attendance, actually.

Oh, each had a booth to be sure, but other than a poster or two and maybe an empty chair, the contents were relatively sparse and, for the most part, had nothing to do with 3D printing.  Thinking that maybe they were going to begin to enter the 3D printing market and help move the industry forward, you could have heard our hopes crash, even over the noise of the crowd.

In spite of this disappointment, the show went on, and went on well. There were about 30 to 35 firms in actual attendance, and all were doing their best to attract attention – 3D printer manufacturers, 3D printing solution providers, 3D scanner and software firms, and filament/supply makers. 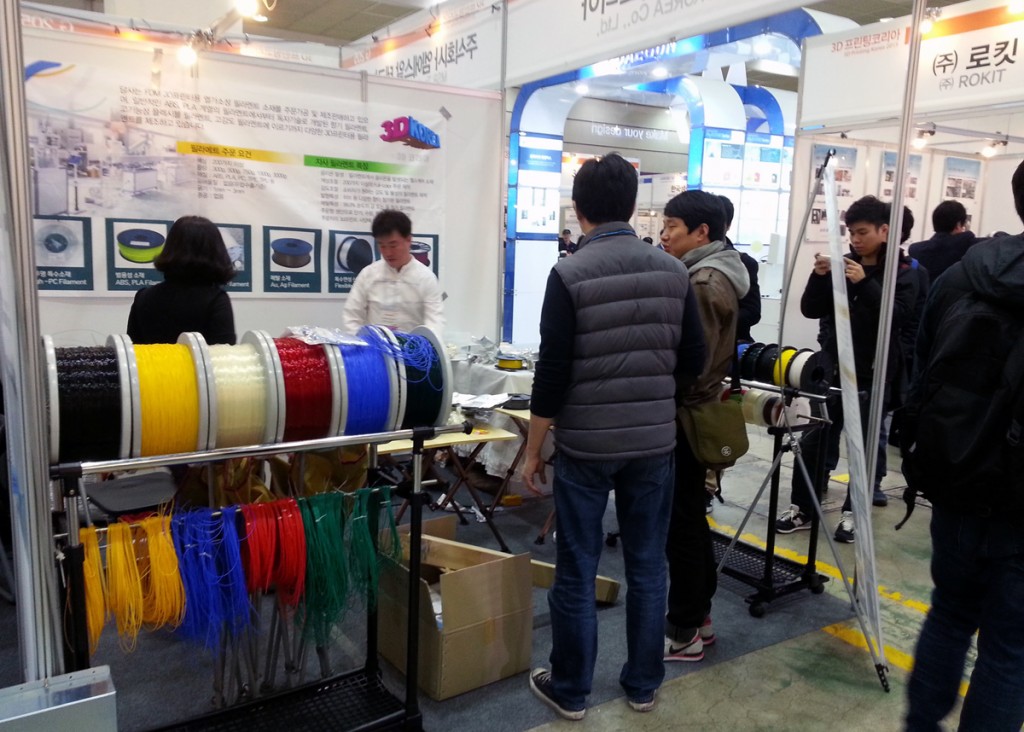 The first company that caught my attention was 3D Korea.  Turns out that the founder has approximately 20 years of experience in the plastic compound and composite industry, and has decided to become a 3D printer filament manufacturer.  For now, they are only a B2B business and their products are spreading though a number of resellers.

They make filament in more than 200 colors, many with different fragrances added, such as apple.  They also have several that have metallic gold or silver filament that contains actual gold or silver that is more than 99.9% pure.  They also manufacture a filament that contains negative-ions which can be used to create items beneficial for health-care purposes.

He also told us that his company has patented several novel methods to help them to manufacture their filament.  He was then kind enough to provide us with a few short loops of different samples, each with a different trait, to allow us to evaluate them.  We will be writing a review for our readers once we have had a chance to use and test them all. 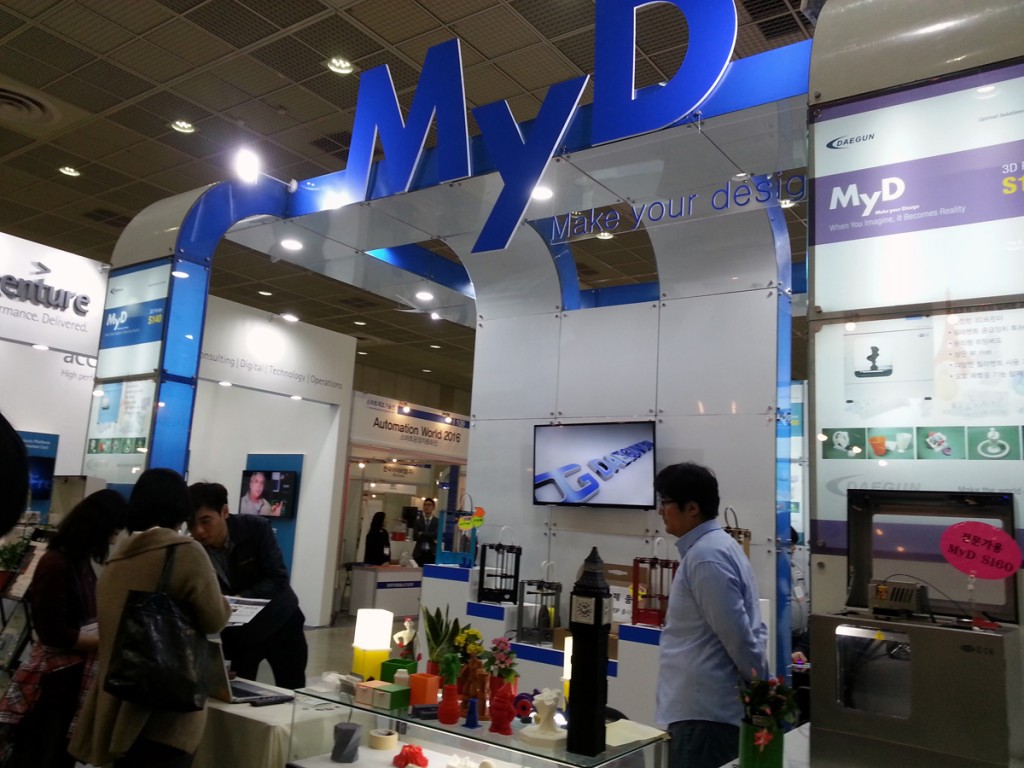 The next firm that we met was Daegun Tech.  Readers may recall that we have already written a couple of stories about them in the past, but, at this show, they were there with a few new machines…which seemed to be everywhere!  Not just at their own booth, but we found them being used in several other companies’ booths as well.  The one that seemed the most popular was their new MyD S140 desktop printer.  It is about the same size as many other FDM machines and has a fully enclosed metal body. 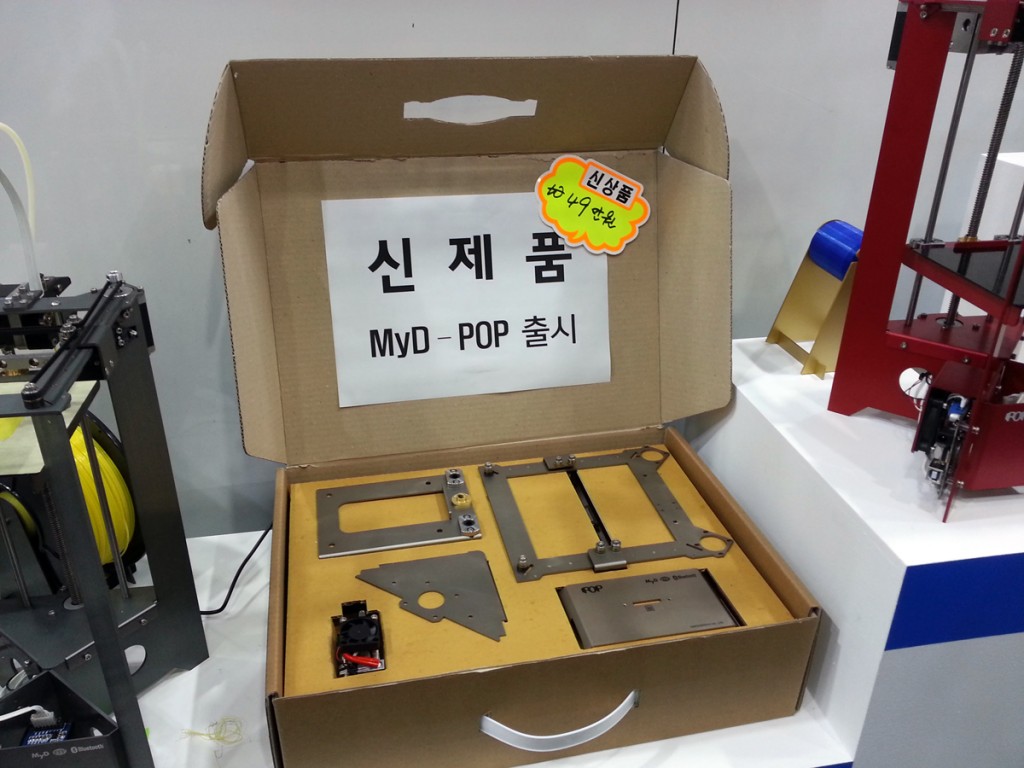 But they also used the event to showcase their new MyD S160, which is of a similar size, but has a heated build platform to allow it to use filaments other than PLA.  And if that wasn’t enough, they also had what to me looked like the cutest little printer kit I have ever seen.  The MyD POP, and they say it takes less than an hour for ordinary people to assemble it.  It is an all-metal, open-style frame, and is supposed to retail for about 490,000 KWN (about $450 USD).  Oh, and did I mention that it is controllable via an app on your smartphone?  Pretty cool.

Next we saw Carima, one of the oldest DLP 3D printer manufacturers in Korea.  For one reason or another, we have never been able to sit down with them and discuss their company, which we plan on correcting in the very near future. as they have a completely new DLP machine whose speed is similar to the Carbon3D.  They recently showed their new machine at EUROMOLD 2015, where they impressed the crowd with the ability to manufacture objects at one centimeter per minute.

Unfortunately for us, they did not have the new machine with them at this show, so we didn’t get to see it, but they did have a nice line-up of their currently available printers, including their new DP 110 desktop printer. 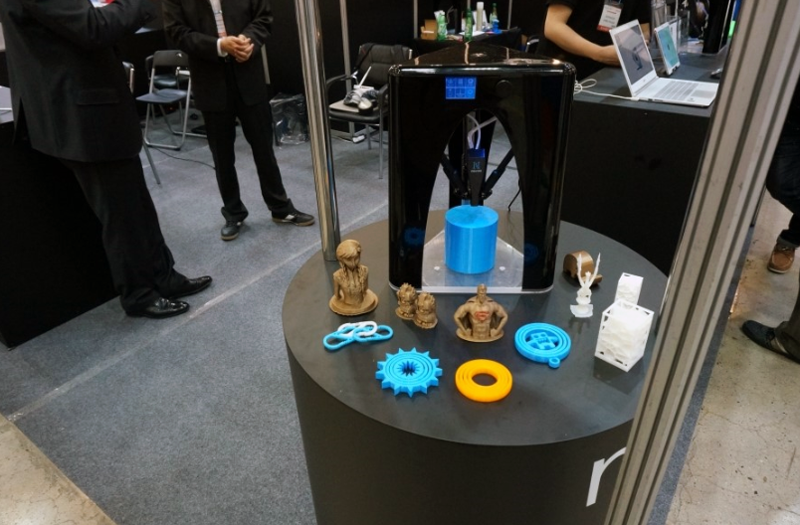 The next firm we met was KAIDEA. KAIDEA is a new startup company that consists of undergraduate students, graduate students, and graduates of KAIST (Korea Advanced Institute of Science and Technology). They are rapidly developing and expanding the machines they have so far, and recently introduced a delta 3D printer available at 900,00Won (about $850 USD). Next year, they plan to launch three more models: another delta printer, a gantry-style printer, and a DLP printer.  Both their delta printers and gantry-style printers feature magnetic on/off, quick change extruders… but. unlike a different company’s quick change extruder, theirs actually seems to work really well.

All in all, the exhibition showed us how far the Korean 3D printing industry has come. Korea got a slow start in the 3D printing world, but it now seems to be making up for lost time. Even though the show was a bit smaller than I expected, the technology and enthusiasm was not lacking at all.  Later I found out that my slight disappointment at the show’s size was unfounded, when I learned that there were at least two other 3D printing conferences going on at the same time in different locations. I wish I could have been in more than one place at one time, but alas….