The TCT Show + Personalize, which will take place in the UK this coming September, is gearing up for another cracking programme of presentations with some great speakers being lined up. Two notable speakers that the organisers (Rapid News Communications) are keen to highlight are world-renowned artist Josh Harker and long-standing 3D printing guru, Joris Peels.

Josh Harker is arguably one of the world’s best-known artists working in the 3D printing field, having first got involved in 3D printing in the early ’90s after struggling to translate his art from two dimensions to three dimensions. However, the state of the technology at the time was not up to the standards it is now and he admits that it took him a further decade for 3D printers to build his designs to the standard he was looking to achieve. The artist, however has never looked back and told TCT: “Simply having a medium that allows me to create my art as I envision it is excitement enough.” 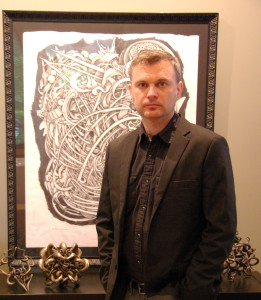 He went on to explain to them that one of the reasons why he is excited about speaking at the TCT Show this September is because he relishes the chance to communicate with those who, like himself, are passionate about 3D printing and the myriad ways the technology can be used. “Events like the TCT Show bring together a wonderful group of people with a specific interest in what’s going on, so I’m excited about being part of that.” He added that it is events such as these that bring 3D printing artists together. This, he noted, is a growing community as new developments draw in more and more practitioners. The theme of Harkers presentation will be The Empowered and the Liberated in the Future of the Revolution. “I will be using my experiences to illustrate the changing paradigm of how artists and designers create and connect with an audience. Also, how a new world of options is opening up for the general consumer. We are no longer bound by economy of scale, manufacturing geometry limitations, and elite marketing and distribution channels. Consumers are afforded more product possibilities as well as options regarding who and where their products come from.”

In a similar vein, the show organisers have also commissioned 3D printing expert Joris Peels to speak as part of an “anti-hype session” along side regular TCT industry stalwarts such as Todd Grimm and Jeremy Pullin, who, like Peels are greatly knowledgeable about the technologies and keen to keep people within the realms of reality.

Peels, who hails from Amsterdam, is now a freelance consultant for the 3D printing industry, and as such can speak his mind (and does) without affiliations curbing his tonge. His knowledge of the technology, the companies that sell it and the people who use it is extensive and gives him a clear idea of where the 3D printing industry should be going. His presentation at TCT in September is entitled “Broken Dreams on the Desktop.”

In an interview with TCT, for whom he also writes a regular column, he said: “There’s a lot of hype on the desktop. No desktop 3D printer has a reliability or uptime nearing that of the worst toaster you can buy in all of China.” And commenting on the media and advertisements for the swathe of 3D printers that have hit the market in the last 12 months, he said: “they overstate capabilities of the machines and underplay problematic things such as build quality and reliability. They regularly say ‘now you can make anything using this desktop machine’. In the industry we know this is far from being true, but consumers are being sold a dream that cannot be backed up by technology right now.”

Peels added his concern that unless the “hype honeymoon” is curbed, the industry runs the risk of having the mainstream media turn on it, suggesting the technology “isn’t all it’s cracked up to be.” 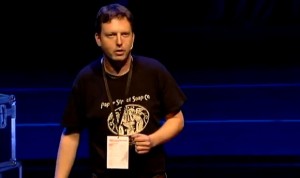 The TCT inteview goes on to point out that: In addition to sorting out how 3D printing is conveyed in the media, Peels is interested in tidying up the technology in a more practical way – sorting out the waste produced by machines when builds do not work or produce novelty items that are destined for the bin before long.

Peels’ view, pulling no punches, is that: “A lot of things made with 3D printing are crap, this is why we need filament recyclers and extruders – so we can fail faster for free and without impacting the world negatively. This will improve overall product design.”

In terms of the community feel of TCT, Peels is not wrong (I am talking from experience here): “It’s a small community and we all like to catch up and exchange knowledge. This makes the entire community more dynamic and knowledgeable. It’s nice to see machines up close that you haven’t seen before. I also love seeing and comparing parts in order to get a better understanding of who can do what and who is actually improving.”

Joris is also excited about the book he is writing that hopes to set out the concepts, applications and limitations of 3D printing for readers who want to learn about the technology. But, at this point he is: “at the 100-pages-of-brain-dump stage and now have to organize.”

The full interview with Joris is on the TCT Website. Registration is now open for the TCT Show, which takes place at the Birmingham NEC, UK 25th and 26th September 2013.