Everyday we are a step closer and a step further away from the 3D bioprinting of a functional organ made from human tissue. At Sabancı University in Turkey, a research team has pushed us further towards that goal by 3D bioprinting anatomically accurate macro-vascular tissue that could, one day, be used to treat heart disease in cardiac patients and provide the basis for the vasculature of 3D printed organs. 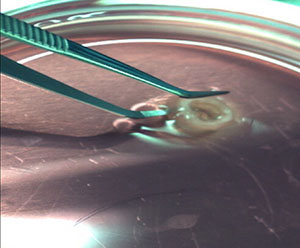 The university’s 3D Tissue and Organ Printing Lab, Nanotechnology Research and Application Center (SUNUM) has taken current 3D bioprinting technology to its next logical step. Whereas company’s like Organovo have been able to 3D print cellular arrays made from liver tissue, Sabancı has modeled their print after actual MRI data. The team began by translating an MRI scan of an actual human aorta to a specialized CAD model. Living human fibroblast cells were then cultured and printed with a hydrogel to form the aorta structure.

The hydrogel was incubated for five to seven days until an anatomically accurate section of the blood vessel was formed.

Blood vessels, like the aorta, are made up of fibroblast, endothelial and smooth muscle cells.  So, while the SUNUM researchers were able to culture the cells in fibroblast cells, which serve as the connective material for our tissues, they are continuing to experiment with the endothelium, the thin inner layer of blood cells, and the smooth muscle cells. Ultimately, they hope to construct a more significant representation of the aorta, the largest vessel in our bodies.  Bahattin Koç, a faculty member on the project, explains why they began with the aorta:

There are two main reasons why we focus on the aorta: First, the aorta is the largest artery in the body that caries blood to all other vessels.  Since no other blood vessel is as large as the aorta, it is not possible to replace the damaged aorta by an autologous graft.  Synthetic vessels made of plastic (dacron) are currently being used for treatment, but these are never as good as real human blood vessels.  Moreover, if artificial tissue or organs are to be engineered, we would first need blood vessels to supply oxygen and nutrition to them.  An interesting fact that few people know is that Einstein died of an aneurism in the abdominal aorta.  Aneurism is the expansion of a vessel like a balloon.  In later phases, this may cause the vessel to rupture, leading to internal hemorrhage and even death.  As a result of our work, we may be able to produce artificial aorta using the patient’s own regular or stem cells, eliminating transplant rejection.  We are at the beginnings of this work, and clinical studies may take years.

Unlike most of the previous scaffold-based tissue engineering studies, we use live cells as bio-ink in 3D printing.  Using the algorithms we developed, we calculate the optimal paths to print the cells by mimicking the anatomy of the tissue to be produced.  Another difference is that we print anatomically-correct tissues where all cells are self-supported in 3D. We determine how the support hydrogel structures will be used to support the cells.    After determining where and how cells and their support hydrogels are printed, we save these commands to a file, and then use this file to control the bio-printer.

Our overall goal is to obtain 3D print replacement tissues and even organs that is anatomically accurate and able to meet physiological needs.  We are not at the stage of building fully functional organs or tissues yet, but we are working towards this objective.

The Mimics Innovation Suite, by Materialise, played an integral role in the process by taking the medical image data from the patient and creating a 3D reconstruction with a wall thickness. The wall thickness allows the structures to be 3D Printed.  The file was then exported as an STL, the format for 3D Printing.  This allowed the team to have a copy of a the small portion of the patient’s anatomy that was then used as a foundation for the bioprinting.

If his team is able to accurately replicate an aorta, the next step would be to use stem cells from an individual to grow tissue that might be compatible for transplant. For visual learners out there, you may want to check out an interview with the SUNUM team below:

From a personal standpoint, I only wish that this research would move much more quickly.  Knowing someone very close to me that is in need of an organ transplant that is tailored specifically to their body – including the right tissues, blood type, and organ size – it’s heartbreaking to see the era of 3D printed organs seem so close and so far at the same time.  Even in the case of somewhat compatible donors, an organ transplant from a donor will not match the recipient perfectly. As a result, the recipient must take immunosuppressant drugs for the rest of their life, which is curtailed by the drugs themselves, making the individual more susceptible to disease.

The optimism I feel writing about amazing advances in technology on a daily basis is quickly watered down when I think about how much more could be achieved. The leaders of our insane society are fooled into pursuing a false wealth of money, power and physical comfort. This ideology trickles down into the greater population so that it becomes the dominant ideology of our collective. Meanwhile, the true wealth that could be achieved through cooperative efforts is stunted. If every individual was taught, through a functioning education system and a healthy society, to become self-actualized, to understand his/her/zirself and their talents and how they fit into the bigger picture, we’d have 7 billion geniuses working away. Keeping Up With the Kardashians would be replaced by Keeping Up With Organic Chemistry. Clean energy and a balanced ecosystem would be the norm. Interstellar travel would be passé because teleportation would have already been invented. And it would be possible to 3D print organs for those in need.

Instead, we have whole apparatuses designed to stifle science, from preventing social progress, all so that a handful of people can feel more comfortable and more superior than the rest of us.  For that reason, I see the accomplishment of Sabancı University as a step forward and as a startling reminder of all that has not been achieved due to corrupt leadership and a disorganized, almost schizophrenic, public.