Though I do sometimes tire of seeing the twisty vase as an example of what a 3D printer can do, I like the fact that the new MH5 from Digitrax is at least trying to incorporate batch printing into a relatively inexpensive FDM 3D printer.  Why?  Speeding up batch printing with filament is less expensive than SLA resins.

Digitrax was created by two French ex-pats who move to Saigon (Ho-Chi-Minh City), Vietnam, to create their company.  Entrepreneur Frédéric Lefevre first created the “Titanium Kille”, a CNC machine he built using parts he bought from the secondhand mechanical market of Saigon. Philippe Maurel, who was working as an audio engineer and product manager of Yamaha Music France, left his job, said goodbye to the French Riviera, and joined with Frédéric in 2014.

To help a friend who was looking for a quicker way to 3D print in batches, the duo created the MH5, the first 3D printer with 5 independent heads, which are adjustable in terms of positioning and temperature.  In order to do this, they scoured Saigon for a good crew of engineers, and ended up developing a great teamwith a few 3D printing specialists. 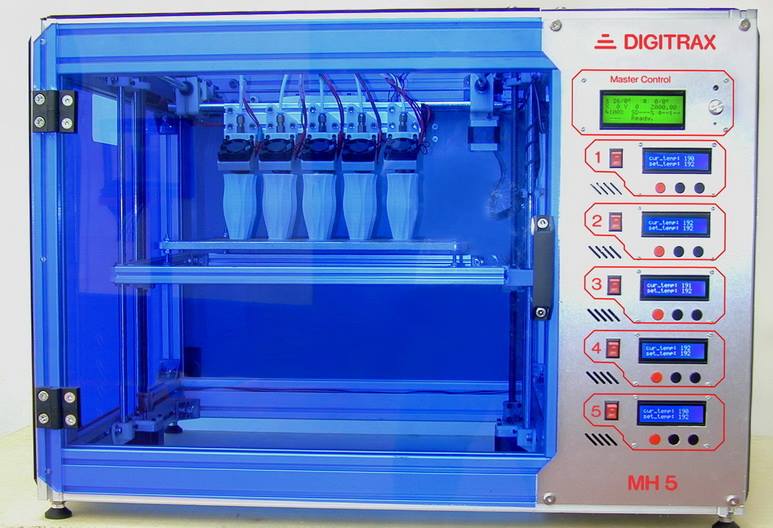 The MH5 can adjust any number of its 5 extruders, and you get a correspondingly smaller build volume when you employ more and more extruders. The problem here is that you don’t seem to be able to print different objects at the same time.  This narrows down the type of user who would find the time benefits gained by using the MH5 for very small uniform batch prints in PLA filament.

This is clearly a prototype, and the final design looks pretty interesting, sort of like an industrial microwave from the 80s, but as always, we’ll keep track of it and see how it develops.

As we move into 2015, the 3D printing industry faces a lot of challenges and obstacles to improving the technology: speed, price, reliability, multi-material functionality, and utility come to mind, as do regulatory and legislative issues.  And, while the giants like HP, Stratasys and 3D Systems loom large for 2016, the people working out of their homes and garages will have to fight and work hard to innovate, as the price points of SLS machines move downward into the desktop 3D printer range.  Not that they will replace FDM machines, and they do require a lot more cleaning gear for excess powder, but people will always be looking for newer, faster, and cheaper 3D printers for their businesses and makerspaces.