3D Printed Selfies of Selfies About the Self

The self is an enigma that none of us apes can figure out. And even if someone told us what the Self was – Freud, Plato, or any of the countless ideologues past or present – we wouldn’t believe them or comprehend their explanations to the extent that we’d be sated. The best we can do to understand the Self, outside of flat linguistic concepts, resembles some strange feeling or perception defying all categorization that, when translated into language, comes out sounding like religious dogma or insane gibberish so that the majority of society rejects it, as they did with Louis CK’s profound series of tweets about “very us-y people-things” from Mars.

But none of this stops humanity from trying to understand the Self, the subjective incarnation of Universe. And, so, we’ve entered an era of extreme narcissism facilitated by awesome technology where monkeys endlessly snap photos of themselves, at once interrogating the Self and reinforcing the ego, the false representation of Self developed to communicate to the world, and ourselves, a polished, cohesive identity. The Selfie is a continual portrait of an individual as a concrete, tangible thing, something that makes complete sense and is absolutely not by any means an incomprehensible mess representing our lack of understanding of Universe and Self.

In the Age of Selfie, we seem to be on the brink of breaking down the ego, with shows about Selfies bringing to our attention just how ridiculous the ego is at attempting to contain this exploding Universe and Self.  Artist Vasili Gavre, too, illuminates the preposterous act of taking a Selfie as a means of containing the Self.  In his series “[email protected] #SelfieSeries“, Gavre has 3D printed his own Selfies snapping Selfies in various poses, all standing at around 4″ x 4″ x 4” or so.

Gavre describes the purpose of his bright pink, PLA series in the following way, “This #SelfieSeries unavoidably contributes to the selfie phenomenon creating a meta effect while simultaneously criticizes the behavior. Self-esteem is often linked to social media approvals which contributes to body dysmorphic disorders. Titled to look beyond the surface and stimulate boundaries of thought.”

Gavre demonstrates his own self-awareness surrounding the selfishness of creating art about the narcissism surrounding Selfies by casting himself in the role of the Selfie taker.  Art made for the sake of drawing attention from other human primates in itself is a selfish act that reinforces the ego.  The artist, here, is aware that his #SelfieSeries is a Selfie in its own way.  And for me, waxing about art that examines the Self in a venue where it has an audience, too, is a Selfie.  My language here conveys to the world/myself: “I have an understanding of the Self. The Self makes sense.  My Self is okay.  Everything is okay.  Everything makes sense.  There is no need to go insane and collapse into a heaping pile of weeping. Time to turn on the TV and watch Selfie!” 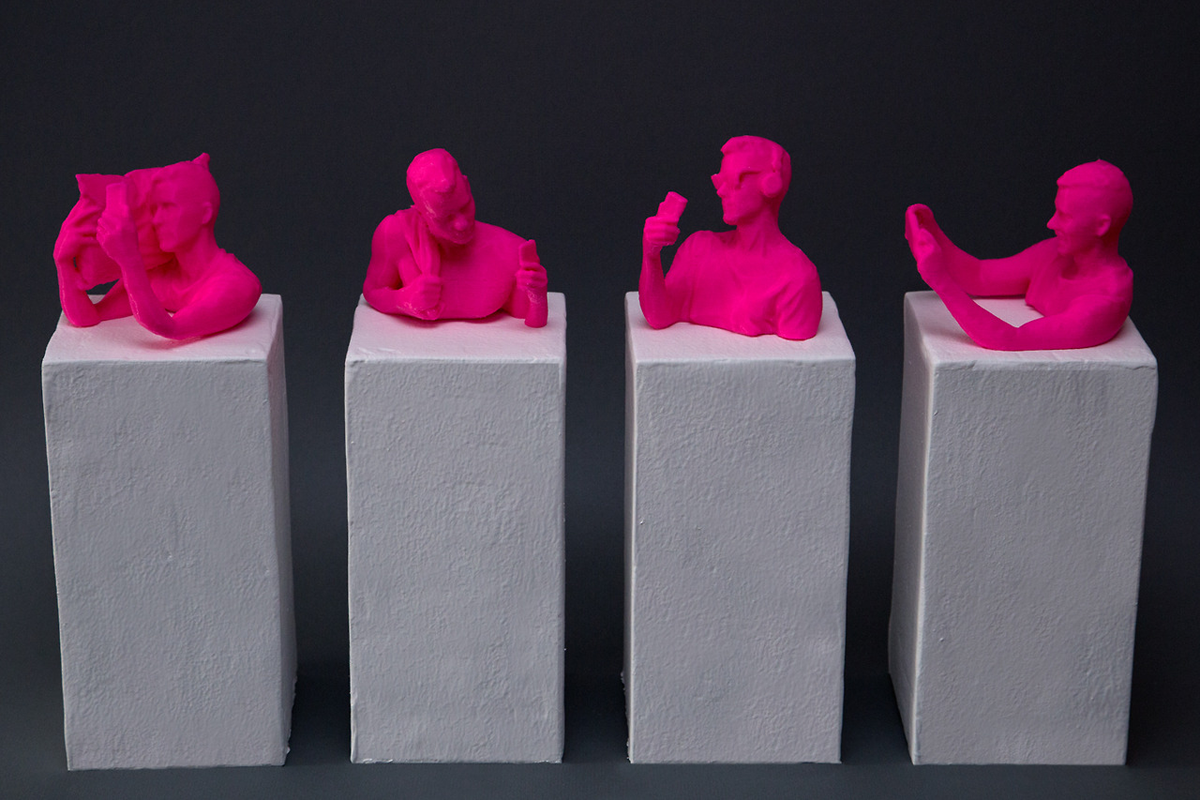