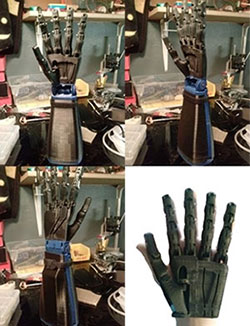 Robotics have taken the 3D printing world by storm in recent months. You might remember that we interviewed Chris Chapell back at the end of February, concerning the development of the accessible 3D printed robotics arm that he was working on with teenager Easton LaChappelle. In that interview Chris said that the Kickstarter project to garner funding for the continuation of the project was imminent.

Well, true to his word, the Kickstarter campaign has gone live today. As would be expected, the campaign invites varying degrees of pledges, from a £1 show of support; through £10 for a finger self-assembly kit; some others; £270 for a complete forearm kit; £600 for an assembled forearm, hand and wireless control glove (which piques my interest); up to £2700 for a deluxe arm.

The campaign website also provides further background information about Chris and Easton, based on different continents, and what drives them.

Take a look at the full campaign here.