The year is 2100 and the Earth, long since made into a Venusian death trap by climate change, is abandoned.  You coast the bleakness of outerspace in a minimalist intergalactic cruiser, looking for something habitable.  In the meantime, having already read humanity’s great works of antiquity- Dave Barry’s Guide to the Toilet Vol. VIII, Golden Girls: A Novel, The Collective Works of Blue Ivy Carter, etc., etc. –  and binge-watched everything on SkyNetFlix, you’re bored.  So, you decide that you want to play some ping pong.  Naturally, you turn to your 3D printer.

Hundreds of years ago – back in 2014 – 3D Systems’ Creative Director, Janne Kyattanen, created something perfect for your exoplanetary voyage.  So, you mentally punch up the creative director’s exhibition, titled ‘janne kyttanen’ and displayed at Galerie VIVID in Rotterdam, in your retinal display, displayed in your retina. Kyattanen appears in your mind and gives you a guided tour of his 3D-printed products. 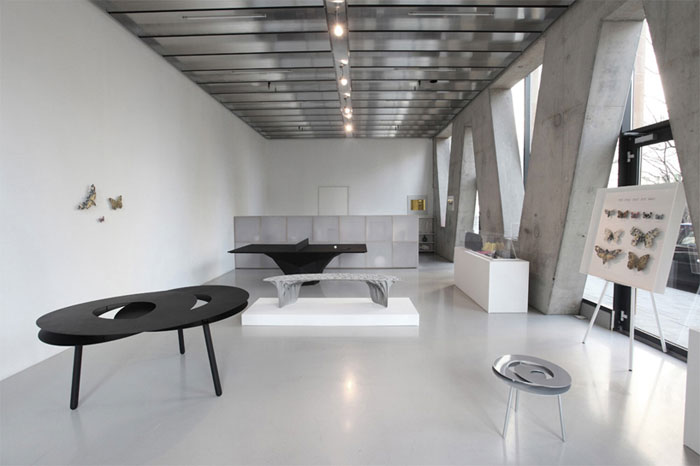 As he wrote in the exhibition’s press release in 2014: “Product lifespans are constantly decreasing,” leading you through a virtual parlor filled with 3D-printed benches made from aluminum, colorful 3D-printed butterflies, and your coveted 3D-printed ping pong table. “while the amount of new products pushed into the market is ever increasing. Most of these products are generically tailored for the unidentified masses, and this –  push into market- development approach decreases the value for the individual and increases waste on our planet. Most consumer products are still produced by an old fashioned (a century old) mass production infrastructure, which equals to large stock, high manual labor, big investments, long distance transportation, an army of employees etc.” 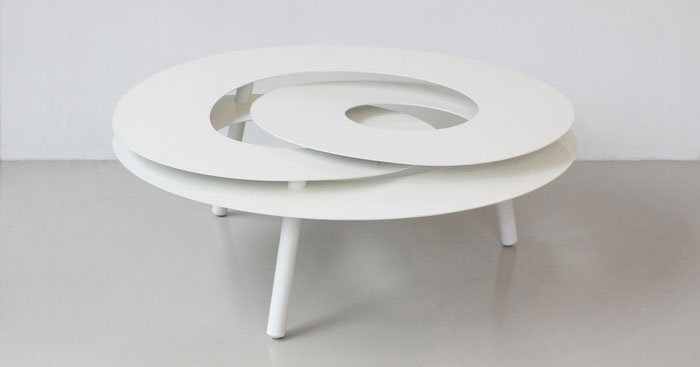 Sure, the designer sounds a bit dated to you, almost a millenium later, but you love history. “Since the world is becoming ever more digital, decentralized and connected, our approach on product development will change the world forever. Mp3 changed the music industry forever, digital cameras did the same for photography and digital printing enabled everybody to become a publisher – now the same transition is already occurring for consumer products as well, and people will be able to create their own products with great ease and will not need to be bound by the selection they can find in stores. as a result, the value for consumers will increase and waste will decrease.” 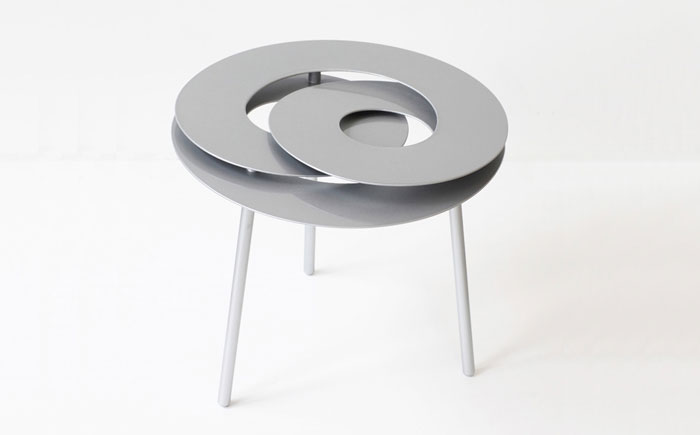 He leads you up to a series of virtual tables, a combination of old fashioned 3D printing technology and even more obsolete manufacturing processes, now lost to humanity due weight limitations during spaceflight.  Lettering appears in your mind’s eye that reads “Rollercoaster Tables”. ‘I imagine that if you could take an aerial photograph of my brain, it would resemble the intricate construction of an la highway, complete with cars racing at autobahn speeds in a never-ending loop of ideas. the concept of scale inspires my design process and drives me to experiment further with the perception of what constitutes the logical size of an object. this exercise triggers a rollercoaster of possibilities, challenging and pushing my design skills and questioning the limitations of traditional  objects and products.’

Next, you make your way over to a virtual bench. Inscribed cerebrally, “Sedona Bench.” This object is printed from aluminum.  Kyttanen continues, “ The infamous red rocks of Sedona are a well-known location for spiritual vortexes and mark the birthplace of the first harmonic convergence. To me, they symbolize one of the most inspiring surroundings in the USA for an artist and designer. The unique sandstone formations are illuminated in brilliant shades of red and orange; the most incredible graphic patterns have been formed after a millennia of native design. to me, this is one of mother nature’s most brilliant creations. My interpretation of the peaks and plateaus takes a twisting turn to bridge the organic and the inorganic.”

“Great,” you subvocalize. Finally, he leads you over to the 3D-printed table with its set of two printed paddles and a little printed ball.  Your neurons fire a label: “Deceptor: Ping Pong Table with Custom Paddles and Ball.” You subvocalize, “Yes, that one. Ship, print that, plea-,” but are interrupted by the program. “There are two aspects of my life that i can’t function without – sport and art. Through my pursuit of these disciplines I have learned that physical and artistic boundaries are non-existent.” 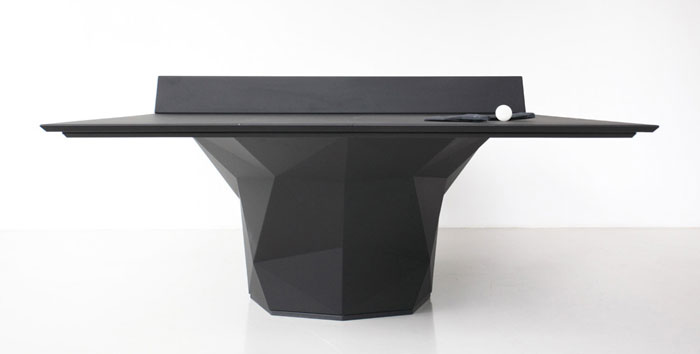 “Ship,” you say outloud, “Please print the ping pong tab-” the retinally resurrected designer continues, “I was an established, professional squash player when I began my studies, ranking 49 in the world in the year 2000. My peers maintained that it would be impossible for me to mix sport with art. Rising to the challenge, I applied the discipline of a professional sportsman to honing my skills as an artist.” You swipe at the air meaninglessly, trying to manually disengage the printing catalog by airsensor.

“Ship! Print me my paddleball ga-” but the program is unceasing, unperturbed by your attempts to engage the printing protocol. “I decided to combine my two great passions by creating a design which completely reinvents the sport of ping pong, facilitating outdoor play. The faceted paddles, like stealth fighters, enable the player to execute trick shots while the custom ping pong balls fly through the air, unaffected by wind.”

“Wind”, you subvocalize, as the program finally disengages.  The onboard molecular printer instantly materializes the turn of the millenium paddleball game, as requested.  You wonder if the designer had any idea of the luxury he and his people had back then.  What you wouldn’t do for any atmosphere, whatsoever.  You’d have killed to be there, at Galerie VIVID, sometime between March 2 and April 20, 2014, to play ping pong and worry about the wind.