Olaf Diegel, of ODD Guitars, has released yet another new 3D printed instrument, just after the unveiling of his Ladybug Keyboard. Some say this instrument is the most important part of any song; others are wrong. Either way, Olaf’s 3D-printed drum kit could possibly represent the future of custom instrument production. 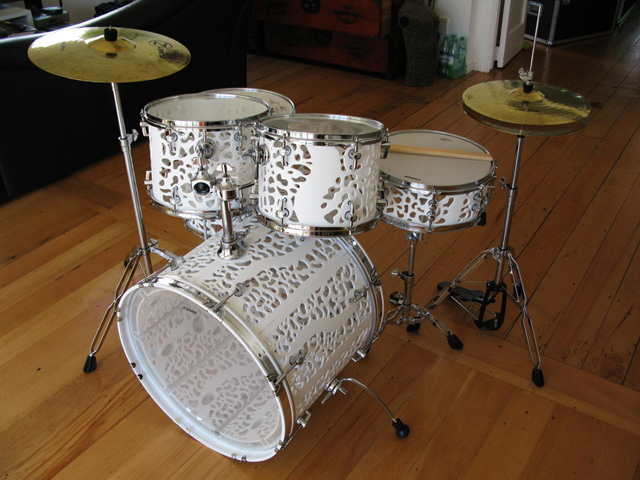 The Atom 3D printed Drum Kit utilizes the hardware of a Sonor SmartForce drum kit with custom drum shells printed on a 3D Systems sPro 230 SLS system. Made up of 12″, 13″ and 16″ toms, a 22″ bass drum, and a 14″ snare in Duraform PA GF, which Olaf explains is a strong type of nylon, this kit will cover the fundamentals for your rhythm section. Like his Ladybug Keyboard, the drums are printed in .1mm resolution and are stark white.

The drums have been finished just in time for their debut at the 3D Systems stand at Euromold, in Frankfurt, next week as part of a complete band. So, we know there will be a keyboard, drums, bass, and guitar (at the very least). But who will they get to play it? I don’t want to get anyone’s hopes up, but I’m guessing that there’s only one possibility: The Beatles – which reminds me of something John Lennon said when asked if Ringo Starr was the best drummer in the world. John said, “In the world? He’s not even the best drummer in The Beatles.”

Long story short, look for a kick-ass ensemble of 3D printed instruments playing in concert if you’re going to Euromold and you’re in Hall 11; possibly (but definitely not) featuring The Beatles.