We’ve heard of plenty of drones that help increase the death toll, but what about drones that help save lives? Afghan brothers, Massoud and Mahmud Hassani hve designed a drone using 3D printing, robots and a metal detector to hunt for and destroy landmines. 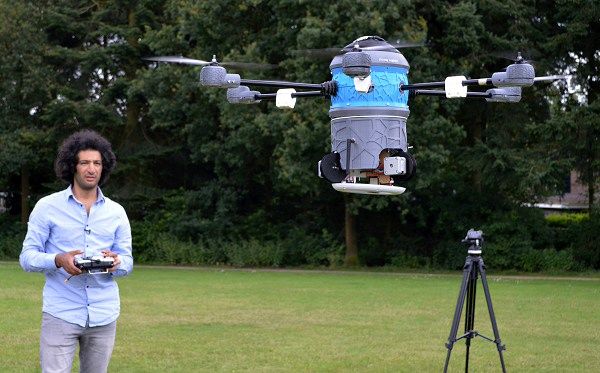 Hinged on six arms with rotors that create lift, the 4.5 kilo (10-pound) drone consists of a blue hard plastic casing with batteries, computer hardware and software and a global positioning system. Underneath is a robot arm which is fitted with pincers, which can carry a metal detector or a small explosive charge which can be used to destroy a landmine, says the brothers.

The onboard GPS lets the user plot a course and control it remotely.

Massoud explains that the drone works in three stages: mapping, detecting and destroying. When deployed, a 3D mapping system scans the section that needs to be de-mined. Then the mapped area is swept by the drone carrying a metal detector on its pre-programmed path. From there, the mines are destroyed by small charges placed on each one.

“This way the mine field in question can be scanned inch-by-inch,” Massoud said. “We believe this way mines can be cleared almost 20 times faster than what they are now.”

The brothers have set up a Kickstarter to help fund their project, as the drone needs to undergo rigorous testing. This isn’t their first mine stopping invention either, but after 3 years of development they believe this drone will surpass their previous design.

“With our new Kickstarter campaign, our goal is to raise funds to be able to develop Mine Kafon drones and deploy them for the de-mining activities,” Massoud says. “Before that we need to do [pilot schemes] with local organizations to be able to test the MKDs in different weather conditions and environments.”

“Along the way we talked with lots of industry experts and listened to their advice,” he says. “We needed to find new ways to detect land mines from the air, and the robotic arm needed to be created and tested with distance sensors to measure the ground. We have [now] developed three different types of robotic extensions since they need to be easy to use.”

The Kickstarter still has 40 days left, so head over and help support this amazing life saving project.