The American Breast Cancer Organisation estimates that over a quarter of million people will be diagnosed with breast cancer in 2017, with 252,710 cases in women and a further 2,470 in men.

On an international scale, the number of diagnoses escalates into the millions, with most recent figures indicating that it affected an estimated 14.1 million people in 2012.

Accurate detection of cancerous tissue is essential to the treatment and survival of people with the disease. The 3D printed Stormram 4 is the latest version of a robot developed specially for the collection of cells used for biopsy. Developed at the University of Twente (UT) in the Netherlands in collaboration with Ziekenhuis Groep Twente, the device provides a rate of precision impossible to achieve by hand.

MRI data is the most accurate way of mapping the formation of cells within the breast. To perform a full diagnosis of the cancer within in a patient, the data is used to direct a needle for sample cell collection. When performed by hand, some of the accuracy attained by the MRI scan is lost, but that can be retained if collection performed mechanically.

The Stormram 4 is made of plastic and can be used directly within the magnetic chamber of an MRI scanner. The device is made using a high-resolution polyjet 3D printer, and has been developed as a proof-of-concept for market development. 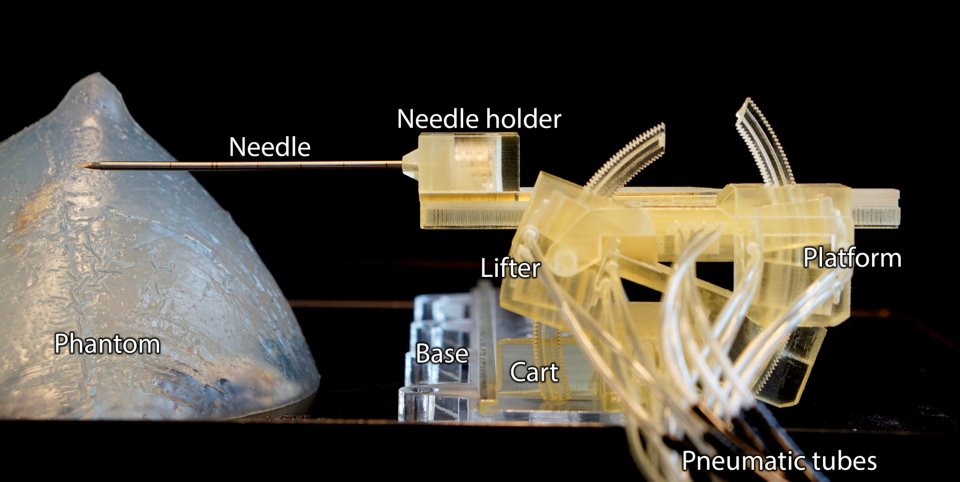 Consisting of a simple cart and rail system, the Stormram 4 is loaded with a MRI compatible needle clipped to the top. Movements are controlled along the x and y axis by an external system of dials, connected to tubes providing pneumatic power.

Preliminary tests show that the device is capable of achieving sub-millimeter precision in needle placement. Not only is this more accurate that the typical approach, the procedure is also faster saving time in exposure to the MRI, potentially improving patient comfort.

A biopsy needle in the Stormram 4 hits a precise target. Clip via UTwenteRaM on YouTube

Another 3D printed cancer detection device, termed the SLIDEMAP, is a current finalist in 2017’s Young Scientist Challenge after 3 years in development. In China, researchers have also successfully replaced the breast of a cancer patient with a 3D printed implant.

Featured image: The Stormram 4 biopsy robot (right) taking a sample from a dummy breast (left). Photo via the University of Twente