Customisation is one of the primary advantages of 3D printing technology because it adds significant value to the process without incurring additional costs. This is an attractive proposition for many custom consumer goods, but another sector where it makes a huge difference is in the medical industry.

A new application developed at Glasgow Caledonian University is a great example of just this — a team there are using a range of technologies, including 3D printing, to overcome patient’s orthopaedic problems — specifically in the foot and ankle. The team uses motion sensor cameras to determine exact foot measurements from which they produce insoles and supports to meet the specific patient’s needs.

The data from the motion sensor camera is used to create a 3D image, which is translated into a physical product using 3D printers. Traditionally, making foot and ankle supports is a long and laborious process — a model of the foot is made, often from plaster and then plastic is moulded around it by hand — which can take up to six weeks. Using a 3D printer this process is cut down to few hours and can be offered as a same day service for people visiting the doctor. 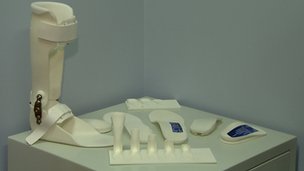 “We want to make these products specifically for the patients’ own impairment and walking difficulties,” said Glasgow Caledonian University Professor Jim Woodburn. “The most exciting part of the project is that the computer design is then transferred to a 3D printer. What we have is complete control of the manufacturing process.”

In a wider context, 3D printing technology has led to the creation of highly accurate models that are used to aid scientists and doctors in studying the human body. Similar modelling is used with CT scans to replicate structures in actual patients and act as models that are used in planning for delicate orthopaedic operations or to evaluate patients’ conditions.

This new process — targeting people with impairment or walking difficulties — has the potential to bring relief to around 200 million sufferers in Europe alone. The European Union has provided the project a £3 million grant for continued research.