Gambody hopes to set themselves apart from other 3D printables marketplaces by offering high quality and unique 3D printable models of popular video games characters. The first IP that they’ve lined up to sell licensed models of are characters from Dota 2, the popular Valve multi-player game.

When it comes to 3D printables marketplaces there tends to be three basic templates that newcomers attempt to pattern themselves on. The first is the Amazon model – or as I like to call it the ‘All your STL belong to us’ model – when a marketplace offers everything from toys to household goods to 3D printer mods and just about anything else that you could possibly think of. Obviously this is a tough template to build at this point because so many options already exist and there simply aren’t enough new consumers or designers to populate this type of marketplace quickly enough to really catch on. The second is the Open Source model that offers everything for free. Naturally there aren’t a lot of these options because of the whole free thing. So it has to be either a labor of love, or attached to another revenue stream of some sort. And then there is the Niche model that totally wants all your STL, but only a certain type of STL. 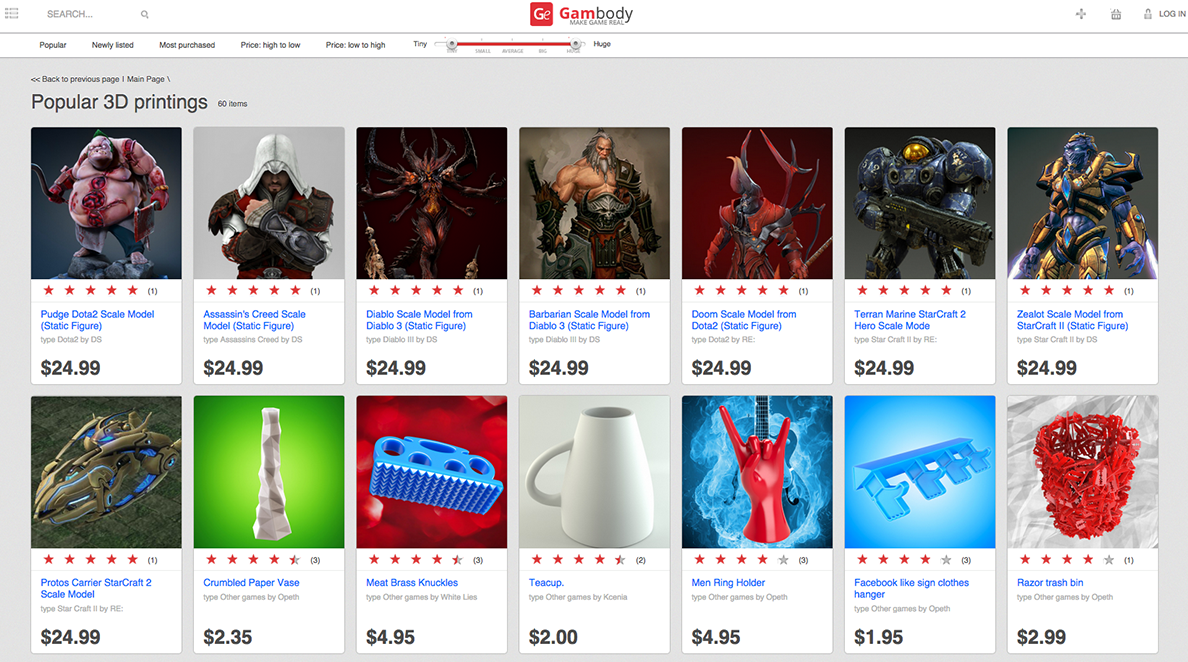 Gambody certainly fits into the last category of niche 3D printables marketplaces by focusing entirely on videogame properties and models that fit into the general aesthetic of their target audience. The Niche model is almost as risky as the first because not only do you automatically limit your market share, but you run the risk of not being able to compete with the larger companies who offer products similar to you as well as anything else that a consumer could want. The Amazon model works because its convenient, and that is very hard for any new business to compete with. Many newcomers try things like overly generous – defined as being detrimental to the sites ability to become profitable – payment rates or strict exclusivity rules. If done correctly, both of those can be great ways to attract sellers, but they do very little to address the need to attract buyers.

But Gambody might have actually found a way to make the Niche model work. By securing exclusive rights to sell user-generated designs of licensed video game characters, they are incentivising fans of the video game to purchase exclusive content from them. While that is hardly new, their first licensed property is the well-known multi-player game Dota 2 from Valve. The game has a very large, and loyal fanbase willing to buy products featuring their favorite characters. All 108 of them. So it is probably the largest licensed product being offered from a small start-up. 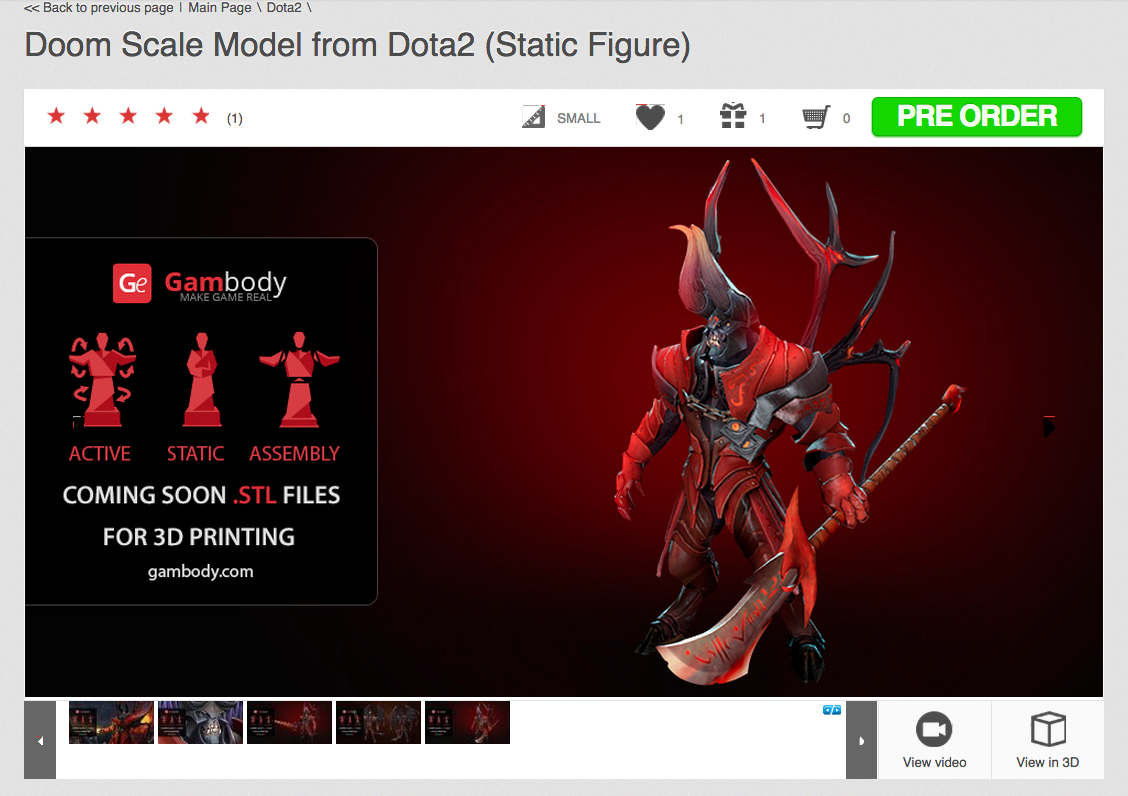 They have also eschewed the pay to print option that a lot of other new marketplaces use and instead trust that there are enough third party options available for users to find someone to print their model for them if they do not have their own 3D printer. The fact is 3D printing has become a lot more accessible in the past year. Most moderately sized cities have 3D printing stores these days, and if not there is always 3D Hubs as an option. If 3D Hubs doesn’t have a 3D printer ready to work for you in your town then they probably have one close enough to not be an issue.

While I live in a pretty populous area, I was still amazed at the options available to me in Los Angeles, and I was equally impressed when I saw the options near friends and family who live in smaller towns. Gambody’s gamble is that they don’t need to offer 3D printing services because they believe their users can find them elsewhere. While that is certainly a gamble, I’m not sure that it is a terribly risky one.

Take a look at this cute animated Gambody ad:

It’s still pretty early to predict how successful Gambody is going to be. In addition to Dota 2, it looks like they will soon be offering Starcraft 2 characters as well. Which could mean they will be bringing even more wildly popular Valve properties to the marketplace in the future. But currently even the Dota 2 models are still only available by pre-order. So we don’t know how well the models will print or how expensive they will be to have printed, and those are two questions that may have answers that users won’t like. 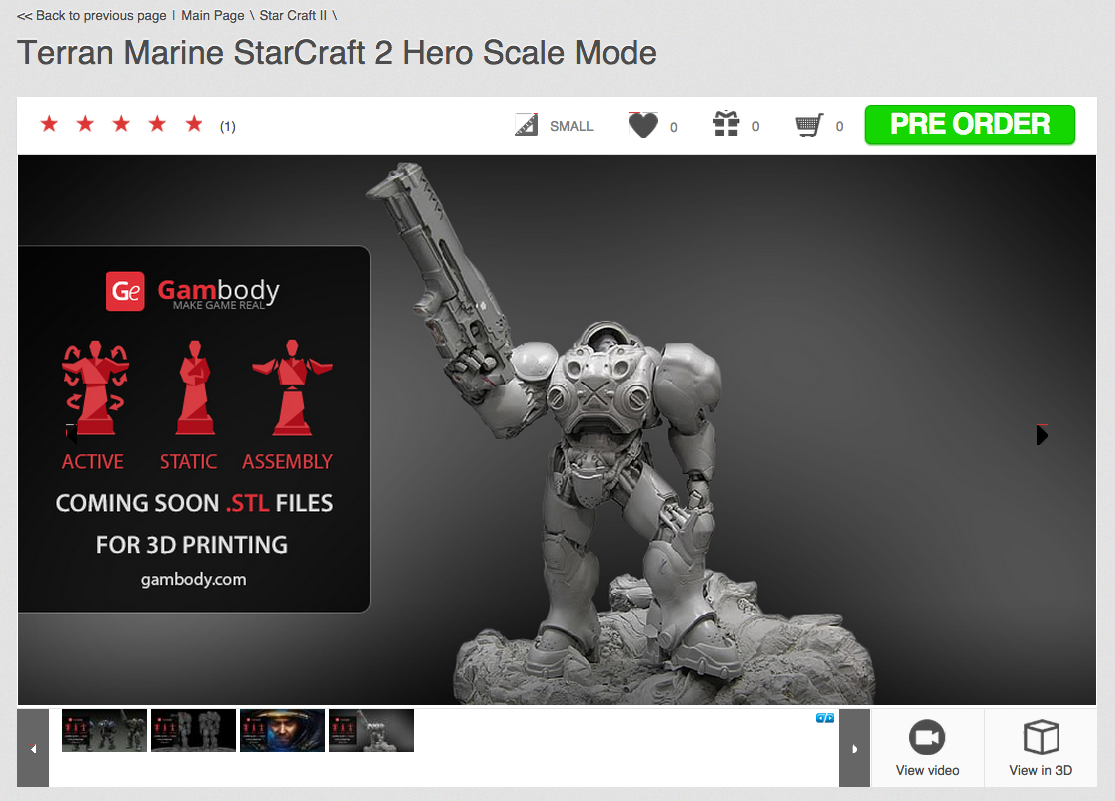 New 3D printables marketplaces will continue to launch, and they will continue to fall into one of the three models when they do. As the 3D printing industry continues to grow there are obvious places for all three models, but if done correctly, the Niche model is likely to become a lot more viable and potentially dominant. Realistically, newcomers aren’t going to be able to take on Shapeways, but with a rapidly growing user base, a lot of new start-ups should ask themselves the same question that Gambody likely did. Why bother?