John Mabry at Teague Labs has been experimenting with 3D printing and consumer electronics. Named after the print time of the product, the project — 13:30 — is a set of fully functioning 3D printed headphones.

For many people — users and commentators — 3D printing is set to revolutionise mass consumer markets and consumer electronics will be key to this. In this regard, therefore, I believe the Teague Labs project signals a tremendous leap forward, resulting as it has in an equivalent product at an equivalent price when compared with traditionally manufactured products. The main difference is that these headphones are made on demand instead of via mass production — using 3D printing technology and consumer-sourceable components. 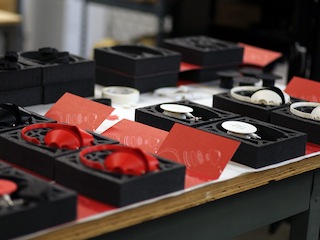 The 3D printed headphone set was revealed at Maker Faire in NYC last month and is clearly aimed at consumers with a sexy product design that could well fit in an Apple store. Further evidence of the consumer focus comes from the fact that the 13:30 can also be custom packaged, giving it a more added value.

Further specs on the 13:30 include the flexible, but durable head-strap and semi-articulating ear pieces. As mentioned, the product takes its name from the original production time of one set, which took 13 hours 30 minutes on a professional FDM machine building in ABS. Obviously, this throws up an immediate problem, specifically that this type of 3d printer is not readily available to an average consumer. This led to the design being adapted for production on a MakerBot Replicator, which threw up a challenge: how to build a part of equivalent quality without soluble support.

One of the current problems with using entry-level 3D printers to create actual consumer electronics products has been the production capabilities of the printers themselves. However, this project has demonstrated a good product for a stress test as they are electronically simple but functionally complex.

As projects like this one emerge more and more frequently — which we are sure they will — it will not be too long before many more consumer products become available including more complex products that go beyond simple household products and plastic toys.

The blueprints for 13:30 can be downloaded from Thingiverse for anyone wanting to try them out for themselves. More images can be found in the image slider below.