3D Print with Play-Doh or Clay for a Day

There’s a supremely cool new extruder with accompanying materials just released by the folks at Hyrel 3D. They’ve done what Play-Doh wished it would have thought of years ago by making a 3D printer print malleable materials.

By virtue of Hyrel’s easy to swap extruder set-up, you can now swap in their new extruder, the EMO1, which is capable of printing clay, play-doh, silicone and plasticine. The print head is loaded by the brute force approach of shoving the material into the nozzle until it’s full, as you can see in the video below:

Hyrel started up as a project funded on kickstarter back in November 2012. After netting over three times their $50k goal, the collection of CAD designers, engineers and software developers, was able to start producing their series of Hyrel 3D printers. The printers are unique in that they’re pre-assembled, offer multiple heads, a built-in CPU and have extruder heads that are easy to swap out, depending on the task at hand.

I asked the members of the Hyrel team if the extruder will work with something like my Bukobot and got the following response from Dan:

Our HYREL EMO1 was built to be interchangeable and hot-swappable with the HYREL 3D Printer.  While we would love to be able to support other 3D printers, we cannot at this time. 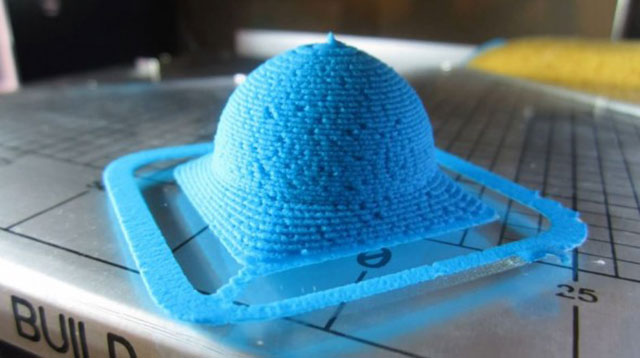 Lucky Hyrel owners will, however, be able to print all sorts of smooshy and smooth objects and I bet that Aardman Animations, famed studio responsible for Wallace and Gromit and Pirates! An Adventure with Scientists, will want one for their next film because plasticine is the same stuff used in claymation (though they haven’t used it since 1997, after switching over to the plasticine-like Newplast). And, interestingly enough, the material has other uses. See the interesting tidbit I found on Wikipedia below:

Athletics officials in high-level long jump and triple jump competitions use plasticine to help determine if the competitors are making legal jumps. A 10 centimeter strip of plasticine is placed beyond the take-off line. If an athlete leaves a mark in the plasticine, it is considered proof that the jump was a foul and the attempt is not measured.