Will MakerBot Sell Out?

I don’t know. That’s the correct answer if you don’t have any hard facts. But! That hasn’t stopped me from speculating.

See, MakerBot, the 3D printing start-up first to achieve success and fame, is reported to have been in the midst of meetings to secure $300 million in venture capital when the topic of acquisition was brought up, according to The Wall Street Journal – at which point, the VC meetings were put on hold.  And, since this rumor was released by the journal, it’s hard not to wonder who put the offer to purchase the firm on the table. According to WSJ, MakerBot earned $10 million in revenue last year and projects a revenue of $50 million or more this year.  With numbers like that, who wouldn’t want a piece of the action? So, let’s get this rumour mill kicking!

Who could it be?

Well, there’s Amazon, for one, whose CEO Jeff Bezos has already raised $10 million for MakerBot in its last round of investment seeking. The behemoth could definitely benefit from a method of product delivery that has customers receiving their orders in an hour instead of a day, as Steve Symington from The Motley Fool explained in a post back in February, 2013. This could be why Bezos admitted no fear of additive manufacturing. There’s also Autodesk, who recently partnered with the firm in a deal to release bundles of 123D software memberships with discounted Replicators. The CAD company might do well for itself to own some hardware to go with their software. 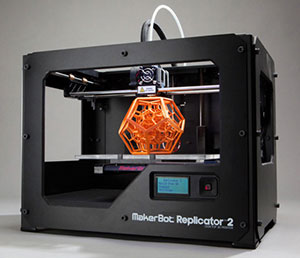 And, then, there are the obvious, large 3D printing contenders like Stratasys, 3D Systems, and ExOne. Symington suggested a few reasons for why 3D Systems might be interested in the firm. 3D Systems, with its own home printing option, the Cube, could pursue MakerBot to weed out the competition and add the Replicator to their desktop line. Could Stratasys or ExOne move into the home printing market? ExOne CEO, David Burns, was adamant that the company’s major focus was industrial printing in an interview with 3DPI, and this one does seem unlikely. But Stratasys, on the other hand, had its short-lived fling with HP from 2010 to 2012, to create a line of home 3D printers carrying the HP label, when the relationship was curtailed suddenly. They have also hinted recently that their long term strategy does include looking at the consumer market. Perhaps the older 3D printer giant has an interest in courting the young belle of the ball, hoping for a fruitful, if not controversial, intergenerational marriage. Plus, the synergy in the 3D printing processes could see added value incorporated into the Makerbot brand!?

For a range of opinions from MakerBot users themselves, turn to the MakerBot Operators Google Group. One user speculates the possibility of 3D Systems acquiring the firm: “3D Systems just issued $250 million in new shares a few weeks ago, which is counter to what most of the market is doing so that’s probably a pretty good guess. I hope that whoever it is keeps Thingiverse intact.”

Another user responds that he’d abandon MakerBot completely if bought by DDD:

3DSystems are the enemy. Not just an enemy of MakerBot but an enemy of innovation. They have invented nothing but a way to make money and a draconian filament control system. They don’t invent. They buy or steal and add it to their collective.

Stratasys invented the fused filament process we all use and even today are innovating new ways to rapid prototype. I would much rather see them buy MakerBot and start offering home 3D printers than 3D Systems who already have a home 3D printer line and who would only be buying MakerBot to dismantle the competition.

This is a hard line I’m drawing here and in light of the possibility of this sell out I’m not happy to make it. 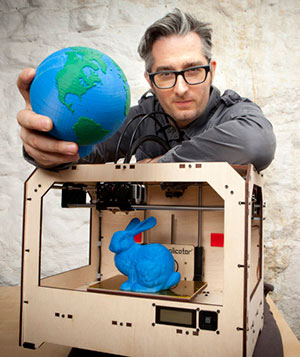 The WSJ article makes the prediction that Bre Pettis, CEO of MakerBot, won’t be selling any time soon. With the company moving its operation to a larger venue, 50,000 square feet, in the Sunset Park district of Brooklyn and expanding its team by 50+ members, it would be difficult to imagine MakerBot just giving that all up so quickly.

I, for one, agree with this last estimation, believing, naively, that the days of acquisitions and monopolies are coming to an end. Sure, we’ll see old folks from the last generation hanging onto dead business models, but Bre is a Maker, grown up from the DIY community. Doesn’t he know the old systems of exchange are dying? If he is true to his roots, I am predicting more partnerships and friendly competition, instead of mergers and hostile takeovers.

As when gossiping about neighbors and mailmen, though, we must keep in mind the words of one MakerBot rep who told reporters at CNET: “We can’t, shouldn’t, and won’t comment on rumors and speculation.”