With access to over 7,000 3D printers in their distributed network, 3D Hubs has plenty of data with which to develop reports around the 3D printing industry, including which brands are being used in which countries and what materials users are processing to make 3D prints.  Their most recent in-depth trend report for October, 2014, they’ve gone even further and have begun analyzing data surrounding crowd-funded 3D printers, outlining how crowdfunding platforms have or haven’t fueled the 3D printer market, and the results are quite interesting. 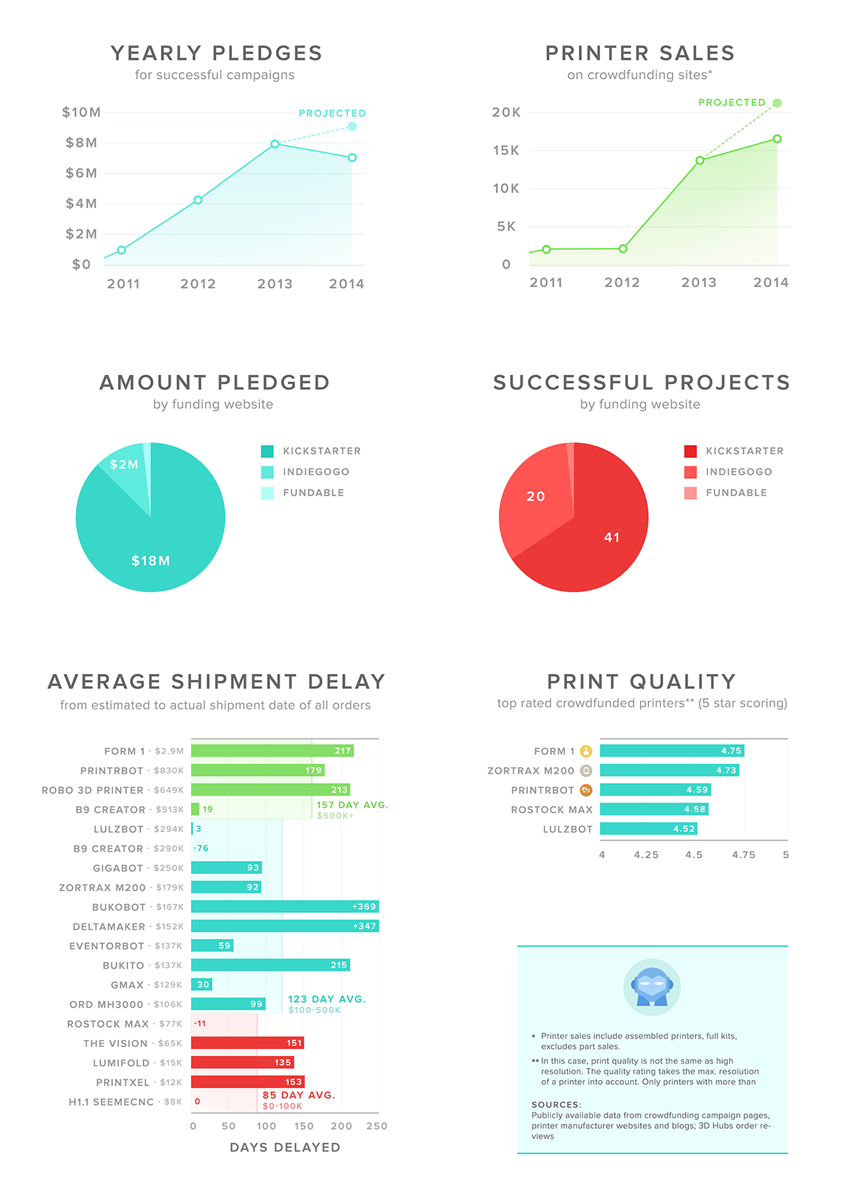 In analyzing 3D printing campaigns over the past four years, 3D Hubs has found that such campaigns have raised a total of over $20 million for 34,000 printers, with sales growing by 96.6% over the past three years and a predicted growth of 17% in revenue and 28% in the number of printers in 2014.  The company also found that Kickstarter, over Indiegogo and Fundable, has been the platform responsible for 2/3 of the projects funded and that the top 5 most funded were Kickstarter campaigns accounting for close to 90% of the total funding.  Additionally, the more a project was funded, the more delayed it was in delivering its rewards, aside from the B9 Creator and Rostock Max campaigns. 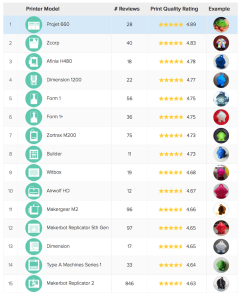 3D Hubs has been tracking reviews of every printer in their systems’ print quality, as well, finding that some crowdfunded machines, like the Form 1 (and the Form 1+), Printrbot, and Rostock Max, ranking in the top 15 machines.  Still, and it may come as no surprise to the color-loving human species, that the Projet 660 and its antecedent Zcorp 3D printers were ranked as numbers 1 and 2 by 3D Hubs users. Surprisingly, the low-cost Afinia H-Series 3D printer was ranked just after them at number 3 with the MakerBot Replicator 2 coming in at the bottom of the top 15 list. It should be noted that each printer received a different number of reviews and that the H-Series only had 18 reviews, compared to the Projet 660’s 28 and the Rep 2’s 846. As the machines are used more regularly over a longer period of time, the distribution should be more accurately weighted.

As 3D Hubs continues to grow across the globe, they’ve established more and more hubs in various cities and, this month, New York City has overtaken Milan as the city with the most hubs, 119 versus Milan’s 118. And, as more machines are added to their list (now numbering 7500), they’re able to continue tracking which printers are being used where. MakerBot is still the most popular brand in the company’s distributed 3D printing network, contributing to Stratasys’ large presence among their users. The manufacturer is still being closely tailed by RepRap machines and Ultimaker in terms of popularity. MakerBot’s Replicator 2 and 2X continue to be the most popular in North America, while Ultimaker is still Europe’s favorite brand. A final interesting takeaway from the report is the fact that prototypes are the most printed category in the network, but have decreased from the last report, which 3D Hubs attributes to the fact that school is currently out for the summer so engineering students have put their machines away and are probably playing frisbee and going to the beach.

There’s a whole lot more than I’ve covered in the October 2014 Trend Report from 3D Hubs, so head over to their site and go through it. That is, unless you’re too busy playing frisbee and going to the beach.